An A to Z guide to attending Michigan vs. Ohio State in Ann Arbor

ANN ARBOR, MI – No one outside of a few fans saw this coming last summer.

Ohio State coming into the final game of the year 10-1 with a chance at the Big Ten Championship and College Football Playoff? That was expected. But Michigan? They are in the exact same position, a pipe dream to most based on last year’s 2-4 dud of a season during the COVID-19 pandemic.

The Buckeyes and Wolverines face off for the 117th time on Saturday, Nov. 27. This year’s high stakes rival the best editions of this rivalry, meaning hundreds of thousands will be converging on Ann Arbor to back their sides.

If you’re planning on making your way to “The Game,” you’ll need to know where to park, where the best tailgating spots are, what to bring and what spots to avoid.

For all of those things and more, check out our game day guide.

How to watch or listen 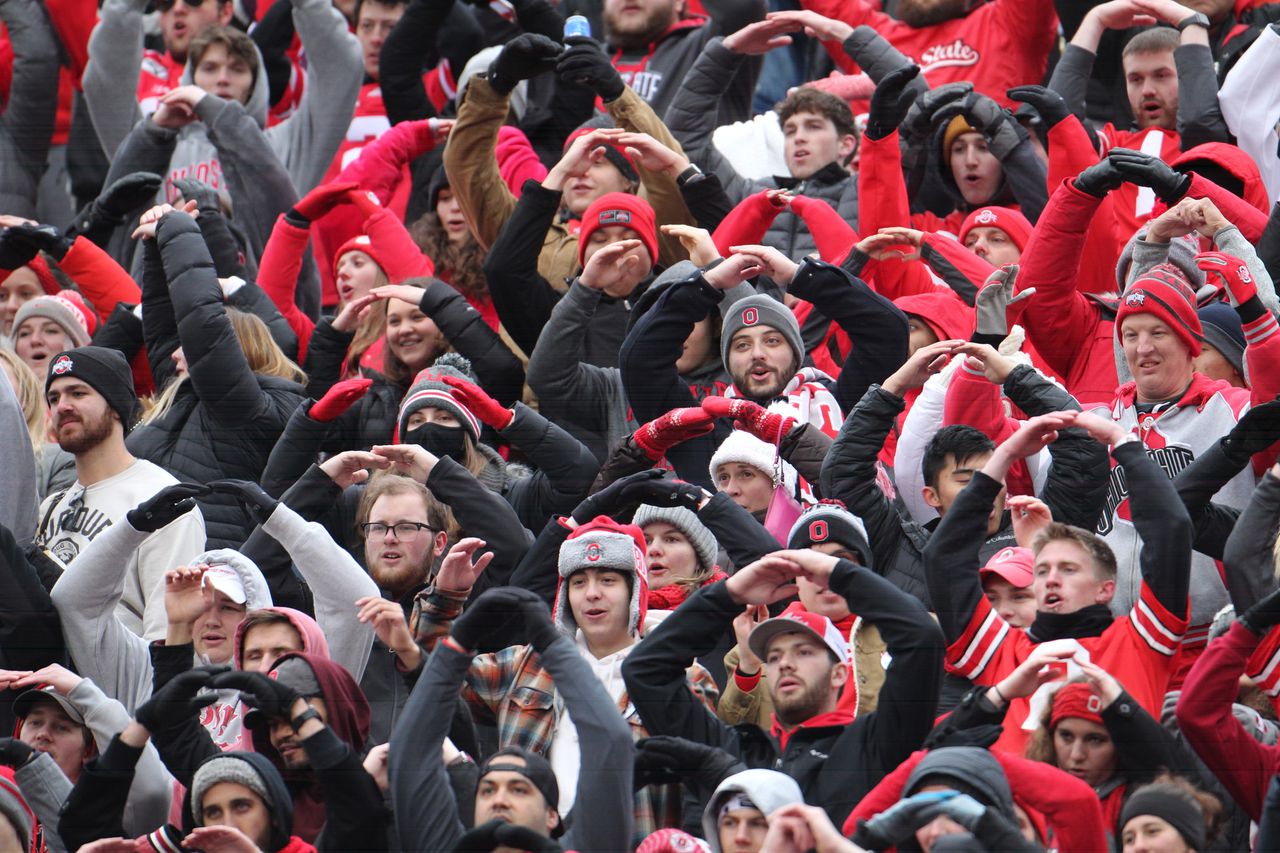 Fans cheer on the Buckeyes during first half action in Saturday afternoon’s football game between the Ohio State Buckeyes and Purdue Boilermakers at the Horseshoe in Columbus, November 13, 2021. The Buckeyes won 59-31.David Petkiewicz, cleveland.com

The secondary market is the only way to go if you want to see Saturday’s game in person.

Individual ticket prices start at $258 on Ticketmaster, and there’s one ticket going for $941. 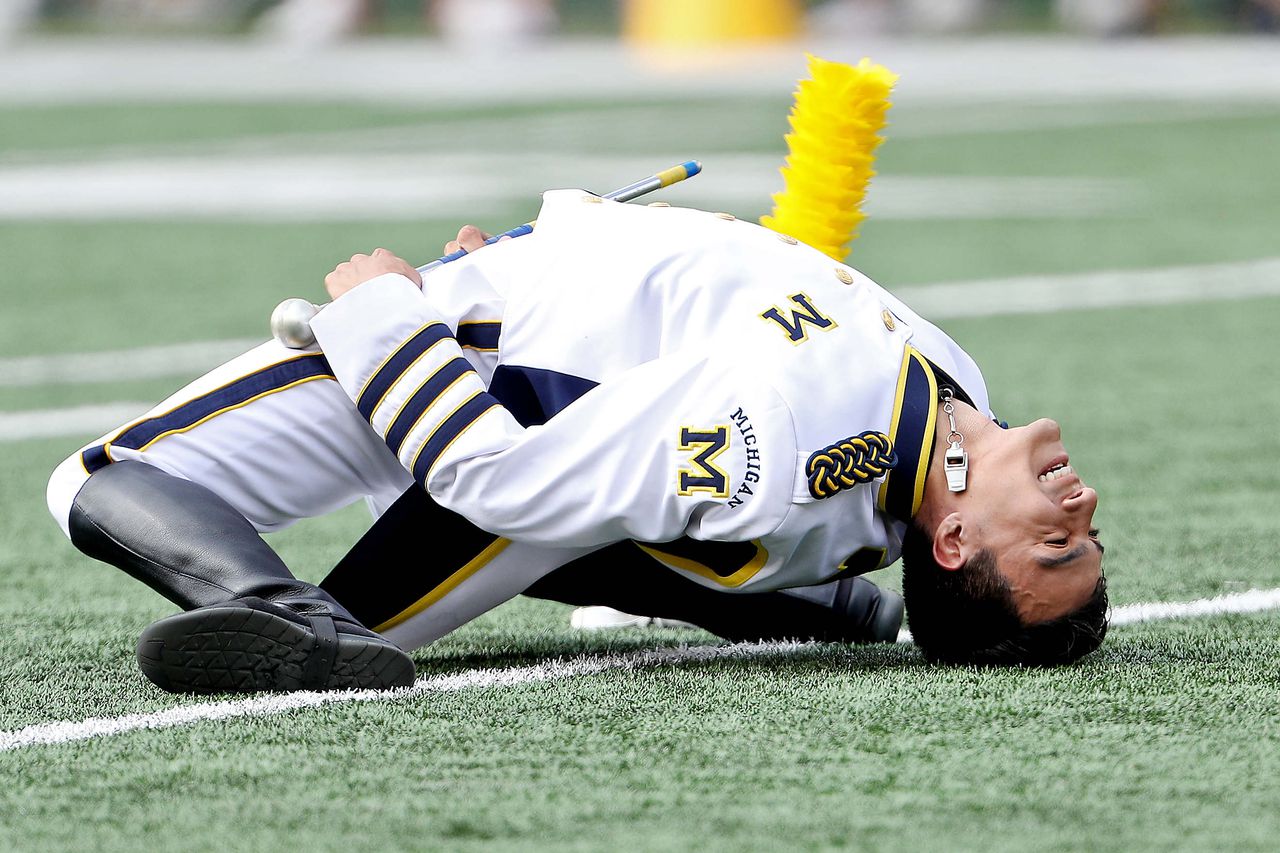 Weather looks to be brisk but sunny for Saturday’s game.

The National Weather Service calls for temperatures around 37 degrees during the day. Saturday night temps will dip to 26 degrees, so bring your warm gear.

With the skies clear, enjoy a flyover by two Air Force F-16 Fighting Falcons prior to kickoff after the national anthem. 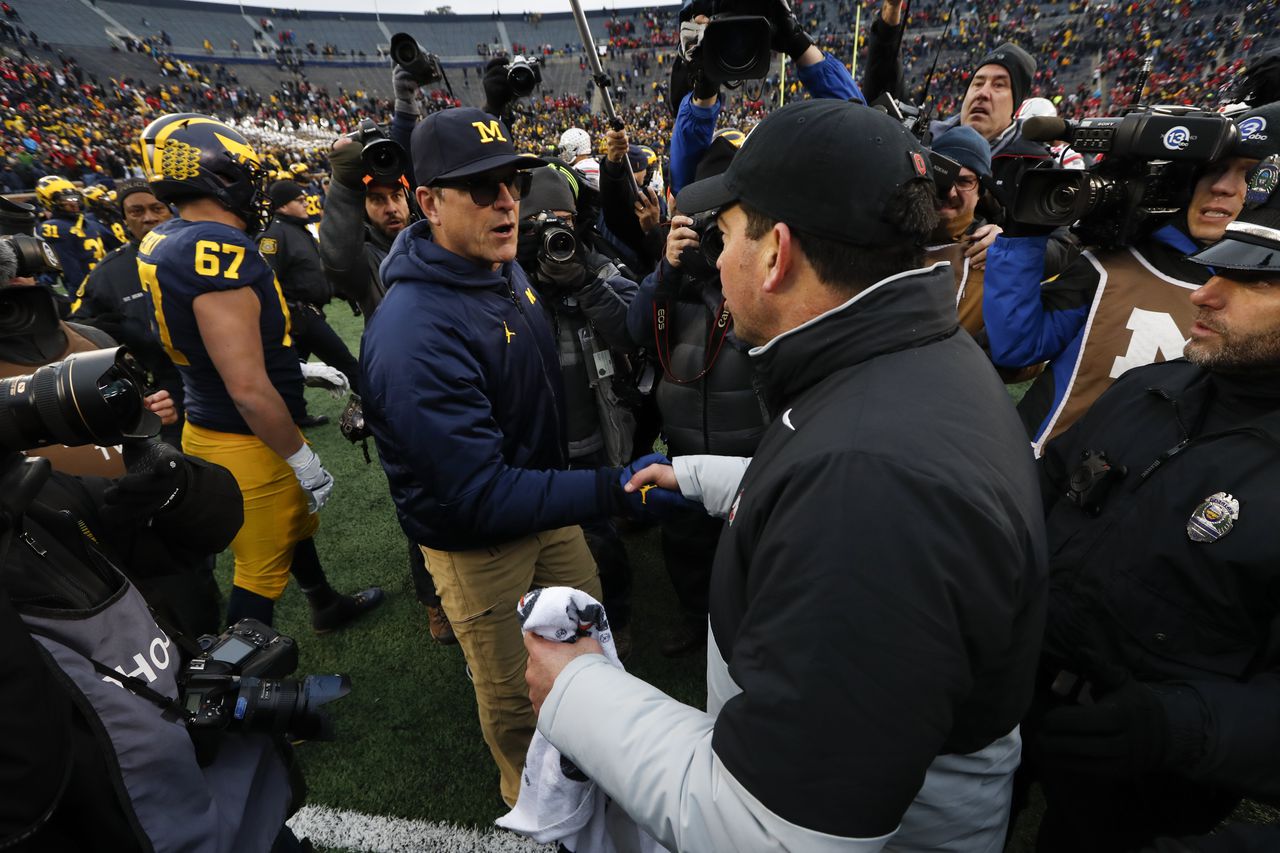 Ohio State is led by head coach Ryan Day, who is nearing the end of his third full season. Overall, he’s 33-3 as head coach, including a three-game undefeated stint filling in for former head coach Urban Meyer due to a 2018 suspension.

Day won his only game against Michigan in 2019 with a 56-27 rout in Ann Arbor. Last year’s game was canceled due to a COVID-19 outbreak within the Michigan program.

Jim Harbaugh is 59-23 in his seventh season as coach of Michigan. While he secured his fourth 10-win season with last week’s victory at Maryland, Harbaugh is 0-5 against Ohio State.

With the game airing on Fox at noon, the network’s “Big Noon Kickoff” show will take place near the stadium. It will start airing at 10 a.m., and former UM great and Heisman Trophy winner Charles Woodson is a regular on the program.

The location of the studio show has not been announced yet, but it typically takes place at the north side of the stadium for the first hour before moving onto the field for the final segments.

ESPN’s “College Gameday” will also be in Ann Arbor. It starts at 9 a.m. and will take place at Ann Arbor Pioneer High School across the street from the stadium. Former UM great and Heisman Trophy winner Desmond Howard, as well as former OSU quarterback Kirk Herbstreit, are analysts on the show. 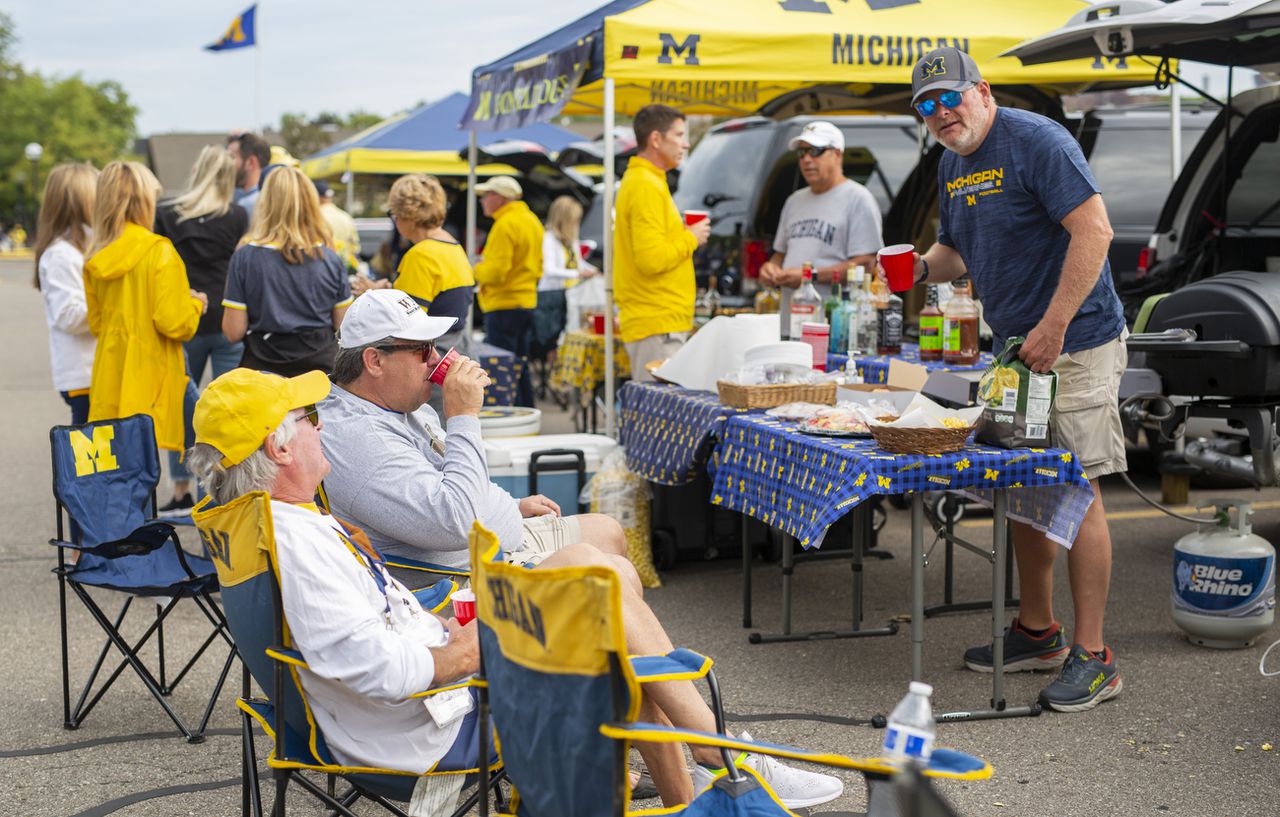 There are a number of parking options around Michigan Stadium. Many lots are permit-only, but there are also numerous options for guests looking for game-day parking.

Look for football parking between 6 and 8 a.m. on game day.

Vehicles should vacate all lots within two hours after the game or they will be towed. UM provides a comprehensive list of parking locations and pricing information. Check out this map for an overview of parking options near Michigan Stadium.

There are also parking lots around Ann Arbor with shuttle transportation to the stadium and back after the game. Here is more information on those options offered by Ann Arbor’s TheRide. 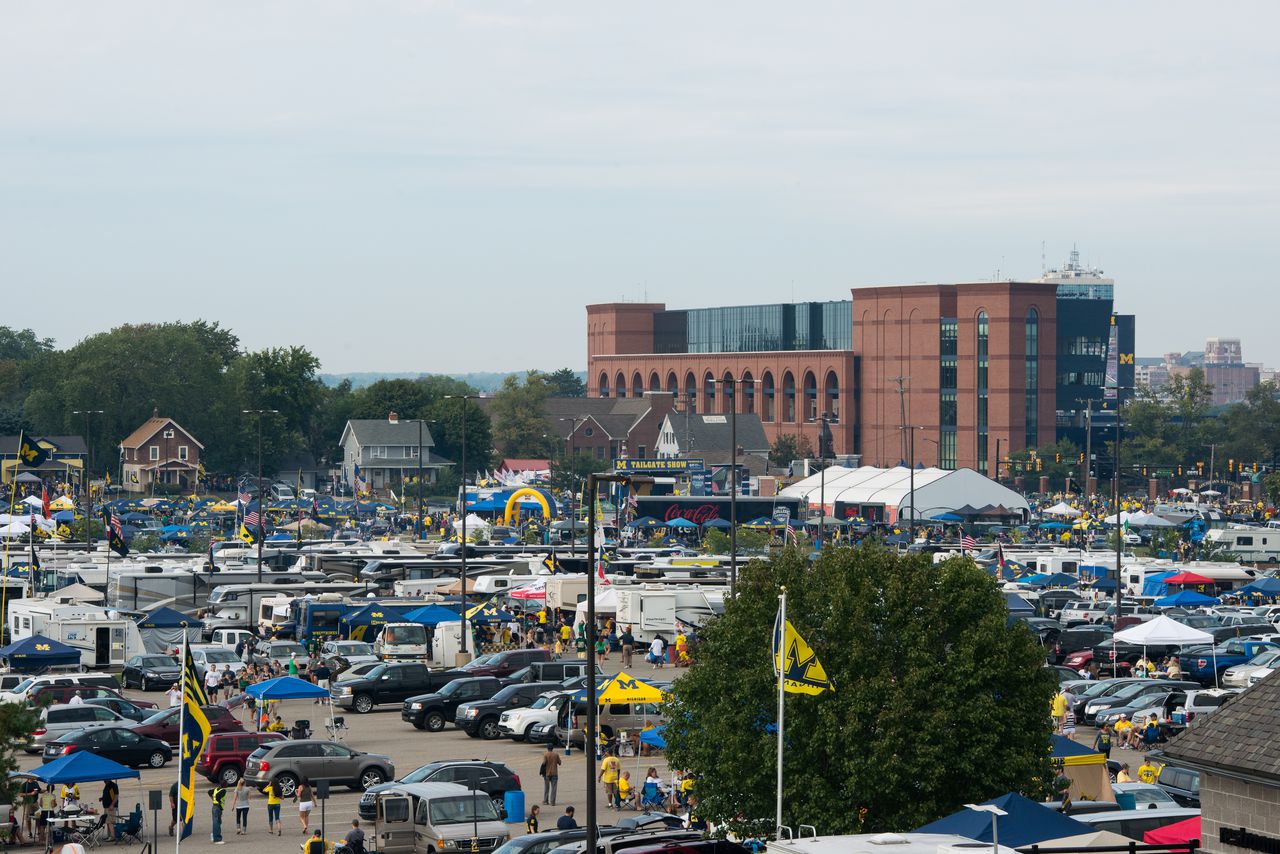 Tailgaters fill the Pioneer high school parking lot prior to a Michigan football game. Ann Arbor Public Schools is bidding out its new contract for a vendor to provide parking operations that generate revenue for the school district.The Ann Arbor News file photo

Only season-reserved RV patrons can park in the Pioneer High School lot this weekend.

RVs may park at the Brown Lot near the adjoining varsity tennis building off of South State Street beginning at 7 a.m.

Permits for the lot are obtainable through on-site, cash sales only on the day of the game. RVs are welcome to stay in the Brown Lot until noon on Sunday. There are very few RV parking spots available at this point, said third-party vendor Park n’ Party.

RVs may only access the Blue Lot, located northeast of the stadium off of Kipke Drive, with a Blue Lot RV permit. There are no day-of-game cash sales for RVs at the Blue Lot. All RVs will be directed to the RV parking area in the Blue Lot. 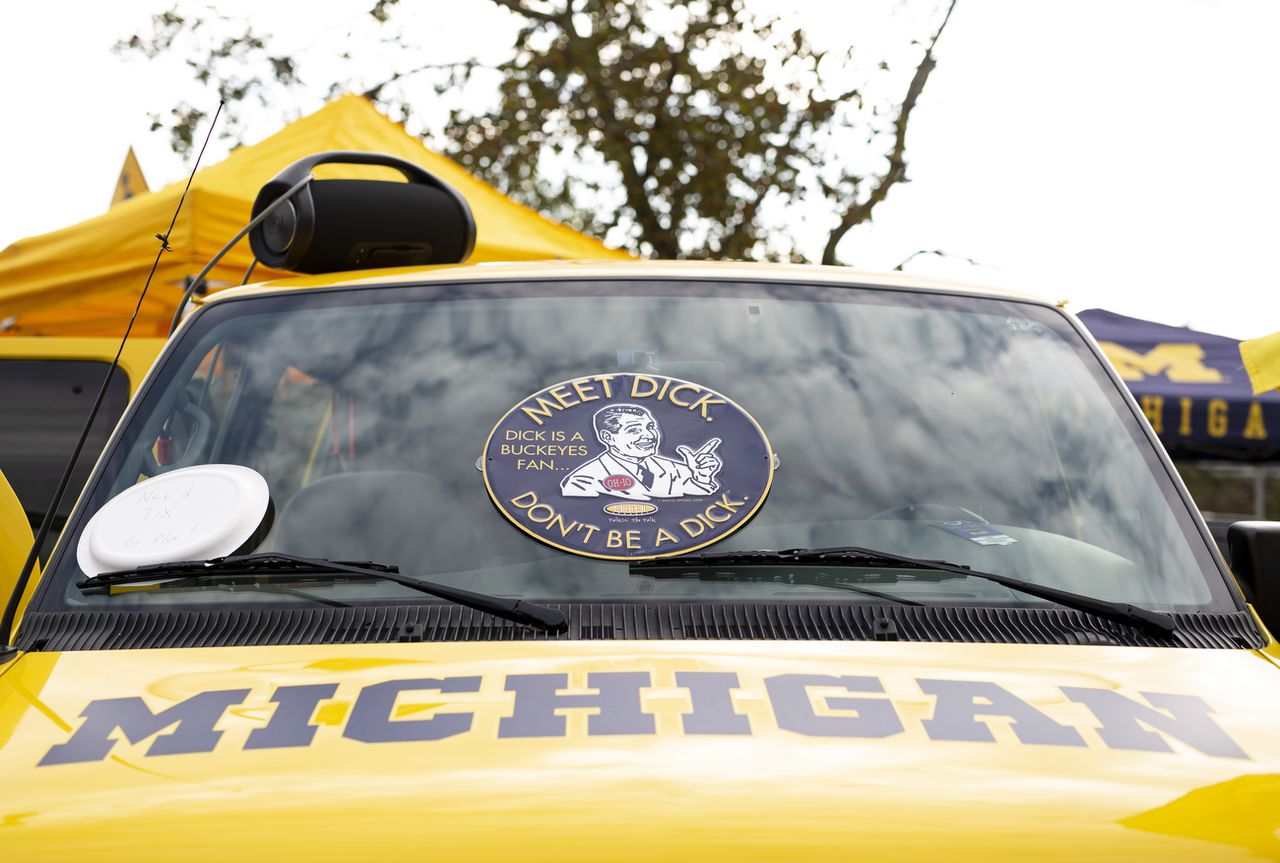 A Michigan themed car has an anti-OSU sticker on the windshield during a tailgate before the Michigan game against Western Michigan at the Big House, in Ann Arbor, on Saturday, Sept. 4, 2021.Alyte Katilius | MLive.com

The city of Ann Arbor restricts on-street parking from 8 a.m. to midnight on home football game days to ease the flow of traffic downtown and increase safety.

For a complete listing of restricted on-street parking locations, check out this map. 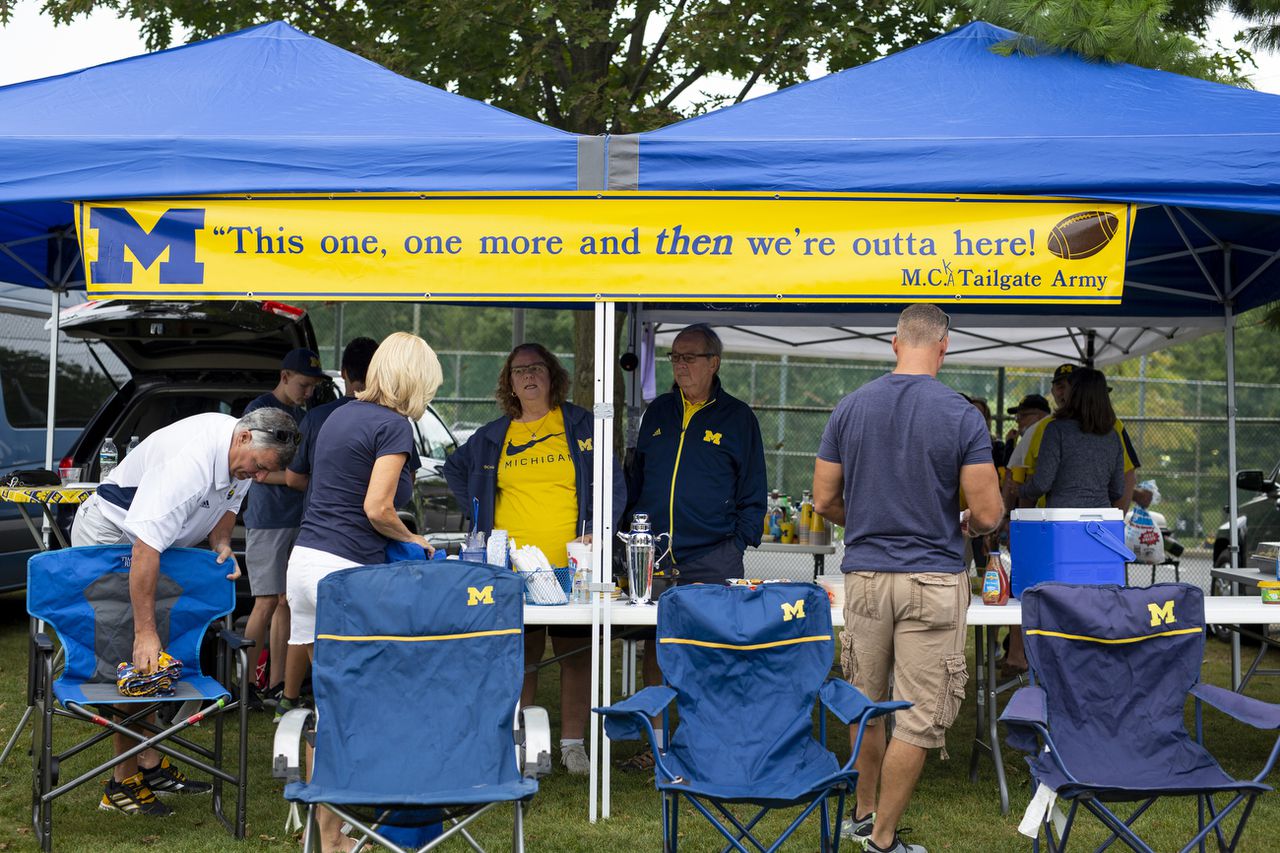 Chairs and food are set up during a tailgate before the Michigan game against Western Michigan at the Big House, in Ann Arbor, on Saturday, Sept. 4, 2021.Alyte Katilius | MLive.com

As is tradition to college football fans, there are tons of tailgating options around Ann Arbor on a football Saturday.

With that said, don’t walk with open containers of alcohol when traveling between tailgates. Ann Arbor Police Department staffs up for the games and open containers are illegal on public property. Violations have led to multiple citations this season. 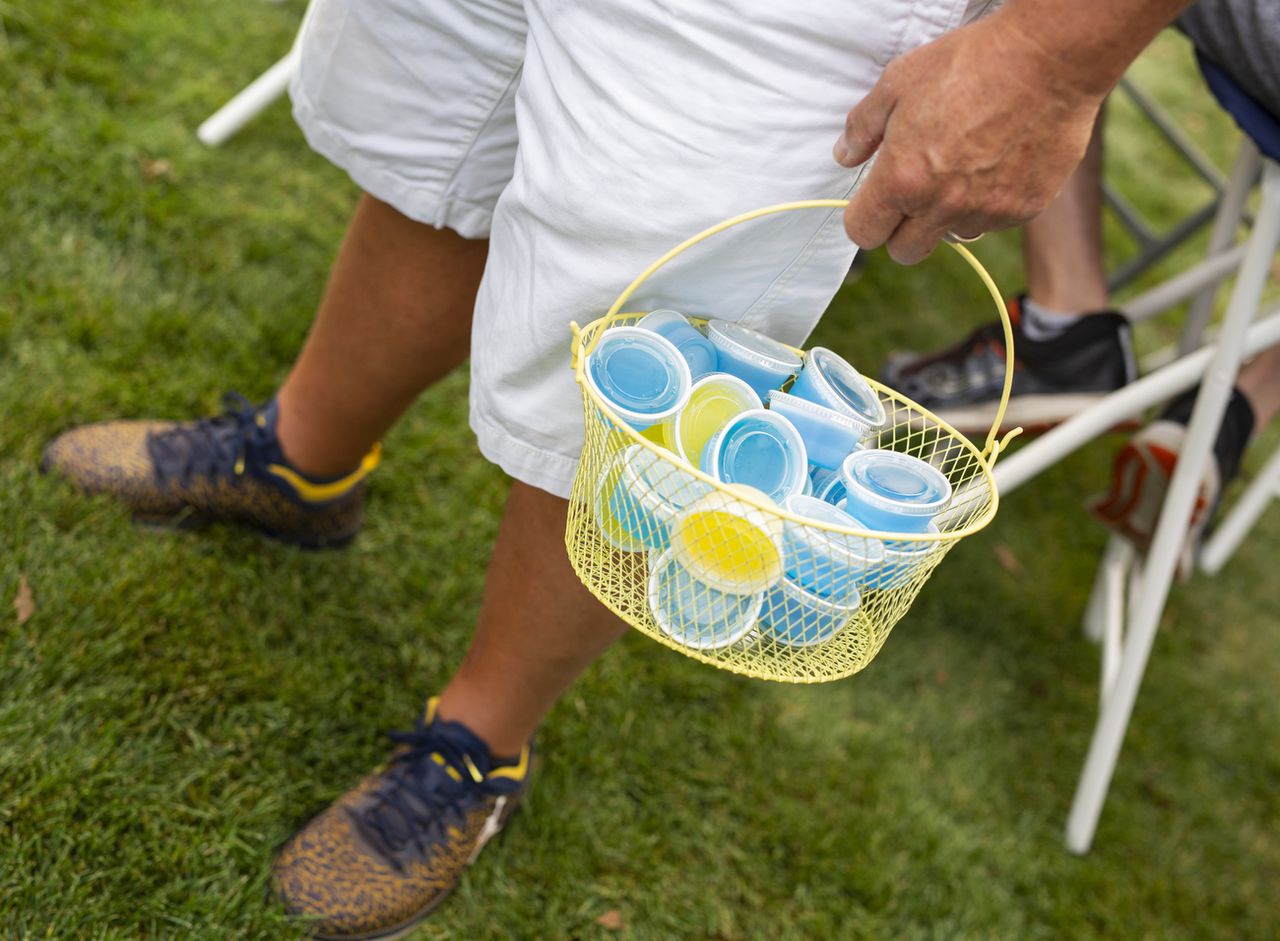 Ira Marks holds a bucket of maize and blue jello shots during a tailgate before the Michigan game against Western Michigan at the Big House, in Ann Arbor, on Saturday, Sept. 4, 2021.Alyte Katilius | MLive.com

Michigan Stadium tailgating is centered around three locations: around the stadium and Crisler Center, across Stadium Boulevard at the golf courses and across Main Street at Pioneer High School.

Starting with Big House tailgating, this is where the long-time season ticket holders and many big-money donors to UM set up shop.

These parking lots are only accessible to cars with special permits, so do not expect to utilize these spots unless you are one of these well-heeled fans.

Showing up on foot, though? That is not restricted, as maybe a friendly Michigan fan will throw a beer and brat your way. 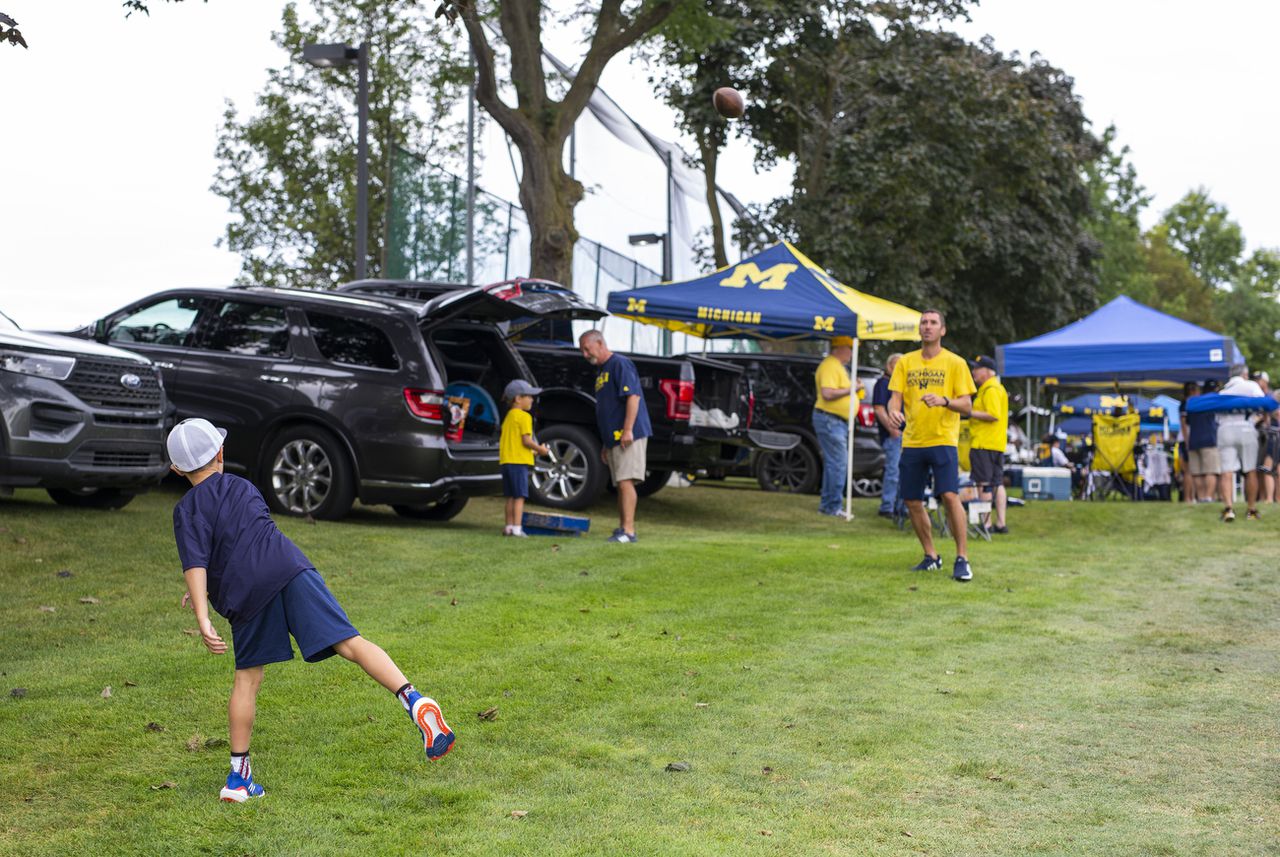 Victor Michaels, 7, left, throws a football to his father, Marc Michaels during a tailgate before the Michigan game against Western Michigan at the Big House, in Ann Arbor, on Saturday, Sept. 4, 2021. Today is Victor’s first time attending a Michigan football game.Alyte Katilius | MLive.com

Parking limitations around the stadium

Parking is limited at the golf course across Stadium Boulevard, according to club officials. It is limited to club members, season pass holders and limited “first come, first serve” tailgaters.

With “College Gameday” at the high school, there are less spots available than normal. The lot on the corner of Stadium Boulevard and Main Street is a very popular tailgating spot, but the studio for the show and the surrounding crowd will take up otherwise prime parking spots.

Parking at Pioneer High School is available starting at 6 a.m. Saturday for this event. Prices are $70 for a spot.

The high school partially outsources parking space reservations to the company Park n’ Party. The company does not list any COVID-19 restrictions, but rather typical rules on how to confirm a reservation. 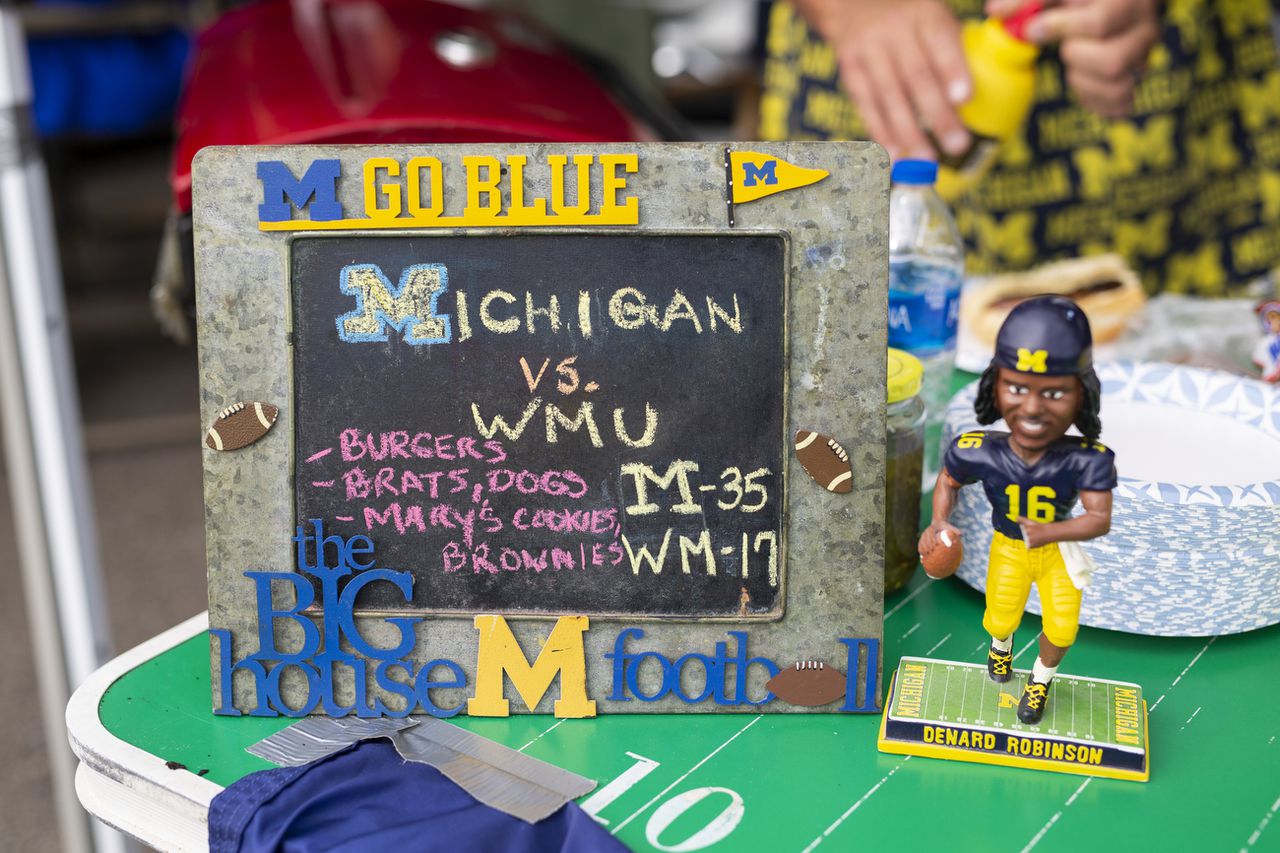 A sign reads “Michigan vs WMU” beside a Denard Robinson bobblehead during a tailgate before the Michigan game against Western Michigan at the Big House, in Ann Arbor, on Saturday, Sept. 4, 2021.Alyte Katilius | MLive.com

If Natural Light or PBR beer is your scene, there are always the University of Michigan student tailgates.

There are the fraternities lined up on State and Hill streets, as well groups of friends living in nearby apartments or rented houses for the school year.

Throw a rock (figuratively, we are stressing not literally), and you will hit a party with maize-clad fanatics. 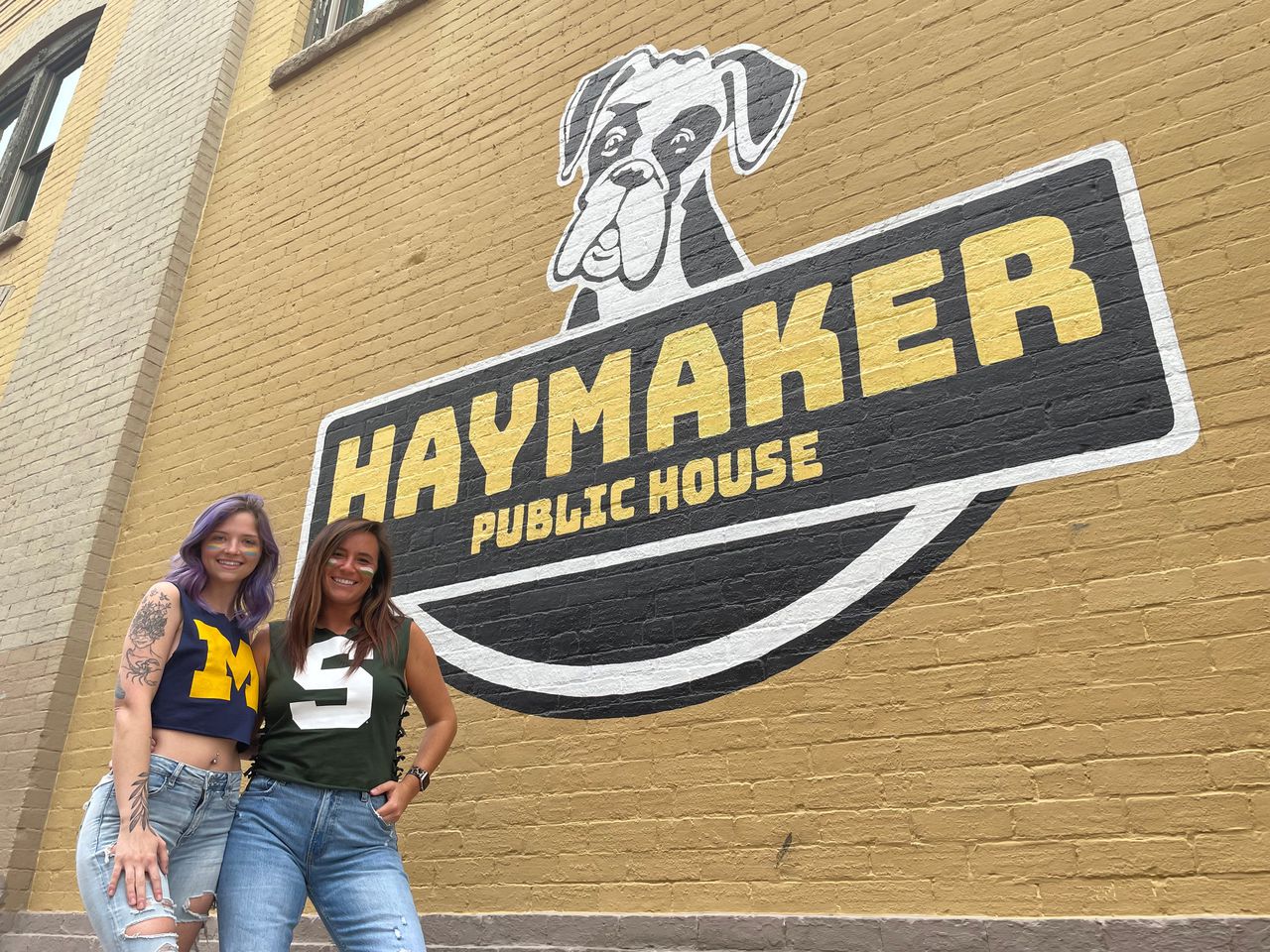 Brenna Lucas, left, and Chelsea Smith, right, are two servers on opposite ends of the UM-MSU rivalry at Haymaker Public House in Ann Arbor. The bar is known as an opponent friendly establishment for UM home football games, and is located at 203 E. Washington St.Sam Dodge | MLive.com

Where to eat and drink in Ann Arbor

It cannot be stressed enough: you can find a lot of types of food in Ann Arbor before or after the game.

Whether it’s top-notch Indian food (Shalimar or Aroma) or Italian food (Mani Osteria or Palio), there are plenty of tasty spots within walking distance to the stadium.

These are some of your best bets. Also, to you OSU fans, Haymaker Public House is known as a “Switzerland” bar that is neutral territory for visiting fans. 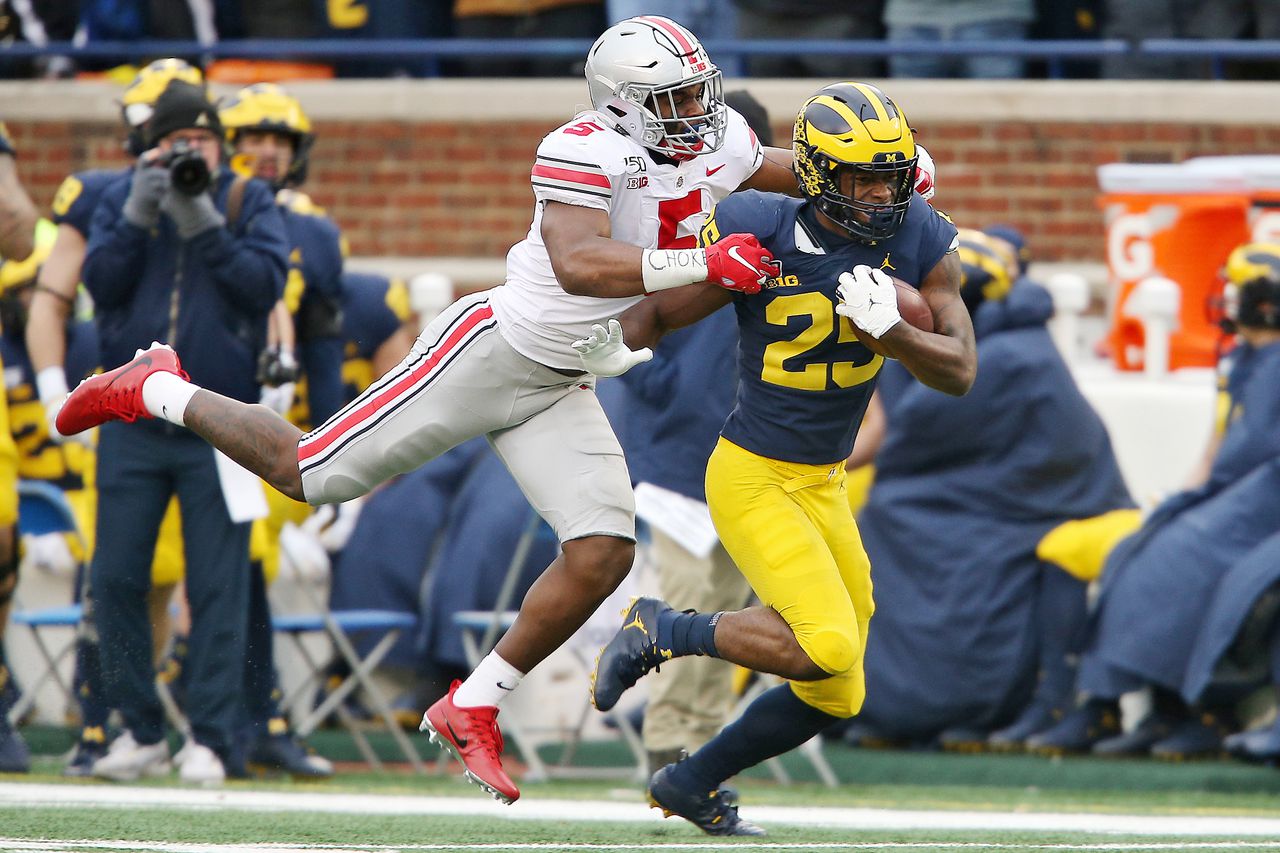 While Michigan has the 58-51-6 edge over Ohio State historically, the rivalry has been one-sided in the 21st century.

The Buckeyes have won the last eight meetings and 16 out of the last 17 in the rivalry overall. The Wolverines will look to rebound from two straight embarrassing defeats by more than three touchdowns, including a 62-39 drubbing in 2018 when they were ranked No. 4 with a chance at the playoff. 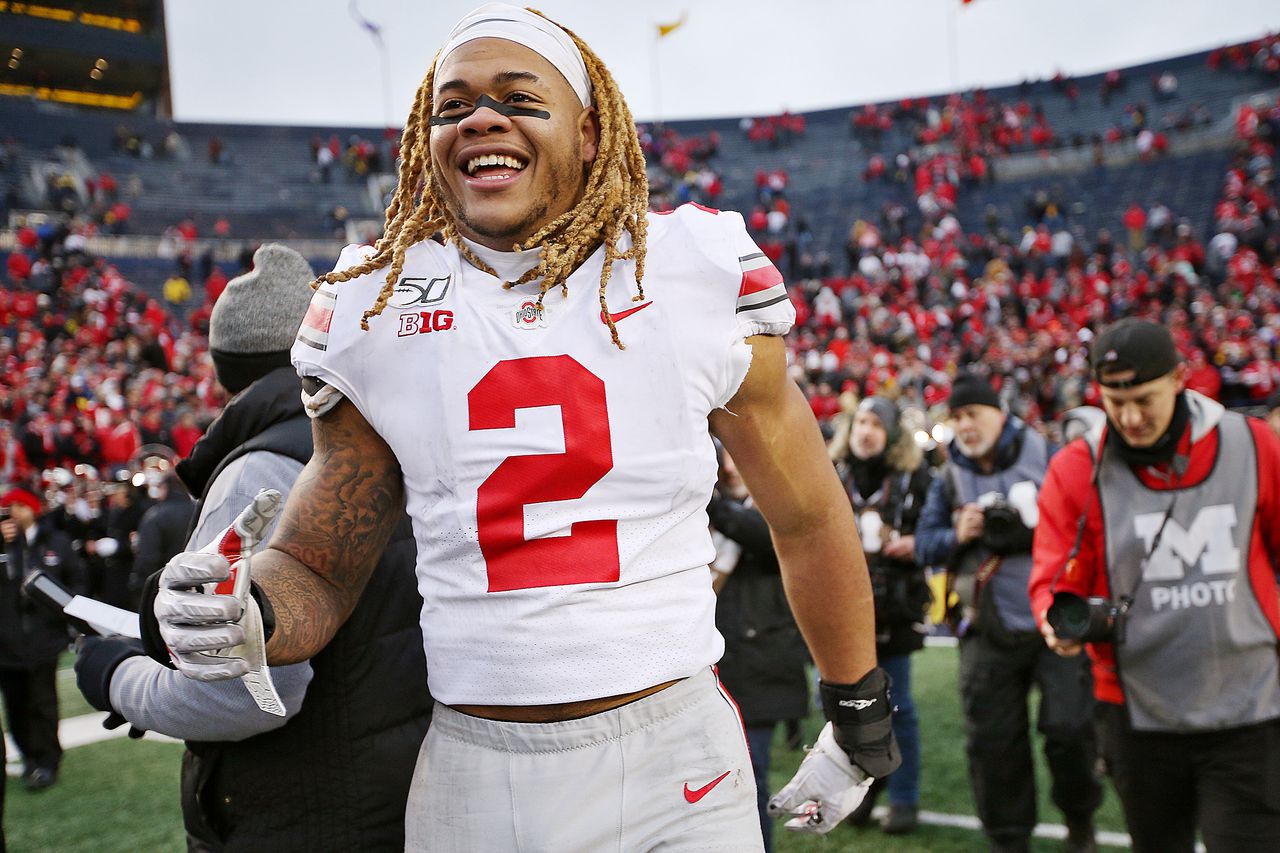 Final note on what to bring and what not to bring

Before heading into the stadium, there are some items you’ll be able to bring in and others that are not allowed.

For Jim Harbaugh and Michigan, Ohio State is top of mind again

3 things fans should be thankful for