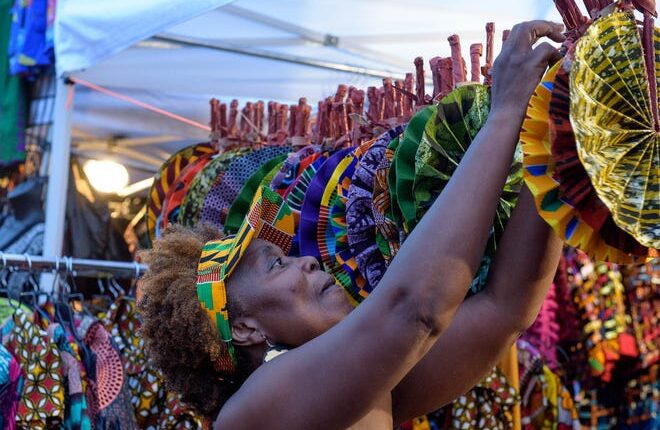 For the first time in more than three decades, the Charles H. Wright Museum of African American History’s annual African World Festival is moving to a new spot on the calendar. Though traditionally held in late August, the festival’s 39th installation will be held this weekend in a return to Hart Plaza.

The celebration of African American history and culture will feature both local and international performers including Mama Sol, Lizz Wright, The Legendary Wailers and Seun Kuti (youngest son of Afrobeat pioneer Fela Kuti). Food, art and clothing vendors will be on site, as well as family-friendly programming and community resource information booths.

Related: Lavender fields, ethnic festivals and a medieval adventure: 5 things to do in metro Detroit this weekend

Festival director Njia Kai, who has led the event for more than a dozen years, finds it fresh and exciting each time.

“I’m really happy to be involved in this annual reunion,” she said. “It’s always a really great feeling to see thousands of folks make up our core audience that come every year. We attract folks from across metropolitan Detroit, across the United States, folks who plan their international vacation to come to Detroit yearly for this event.

“This festival allows for the Wright Museum to expand and broaden its depth by focusing on the world of African tradition, African innovation, African foods, African entertainment. There’s a lot of rich culture to pull from.”

Cam Anthony, 2021 winner of “The Voice” was set to perform Friday night. Detroit native Zania Alaké, who competed on “The Voice” that same season, is among Saturday’s musical acts. A “Detroit Rocks the Runway” fashion show, drum and dance performances and a puppet show are among many other highlights.

A new element this year is the switch to a paid-admission format. The festival has always been free to attend in previous years, although admission remains free for members of the Wright Museum.

“Everyone recognizes that not only the pandemic, but the economic realities of today, require nonprofit organizations and most festivals to begin looking for new sources of revenue to keep going,” Kai explained. “And we all want this festival to keep going, so we’re really hopeful that our audience will understand that and support us.

“Admission is free for museum members, so we encourage those who have not updated their membership, or are just now deciding to join and support the museum, which gets you a weekend pass to the festival.”

Kai is already at work on next year’s 40th anniversary of the festival, which promises to be full of surprises.

“We’re absolutely going to take advantage of this significant anniversary and really have some mainstage blowouts that we have already started contacting,” she said. “We think that Detroit will be very proud of the exciting performers that we’re inviting. And it will be even more of a presentation as we are seeing what we can bring from the African world to really make for an exciting event.”

Why does Lansing want to sell vacant cemetery land? What voters need to know about Aug. 2 proposal

California’s Public Health Tax Is Dead for the Year