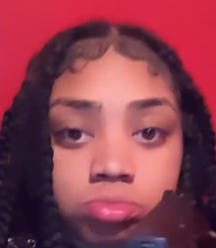 2 males, 1 woman sought in carjacking Monday on Detroit’s west side

Detroit — Police are looking for two men and a woman in connection with a carjacking that happened Monday night on the city’s west side, officials said.

Dale near Telegraph and Seven Mile roads, according to authorities.

The victim, a 20-year-old man, picked up the woman at the location in his black 2013 Chevrolet Malibu. He then drove about a half-mile away to the 23700 block of Clarita Street where the woman exited the vehicle to use a restroom.

Investigators said as she walked away, two armed men approached the victim, robbed him and demanded his car. The victim complied and the two men along with the woman got into the vehicle and fled.

No injuries were reported.

Police said the woman is about 5 feet 6 inches tall with long black hair that reached down to her calves. She was last seen wearing a black bubble coat. Officials released a photograph of her.

They said the two men were described as 18-year-olds, about 5 feet 8 inches tall with skinny builds. They were wearing black clothing and black masks.

Anyone with information about the suspects or the carjacking should call the Detroit Police Department’s Commercial Auto Theft Unit at (313) 596-2555 or Crime Stoppers of Michigan at 1 (800) SPEAK-UP.