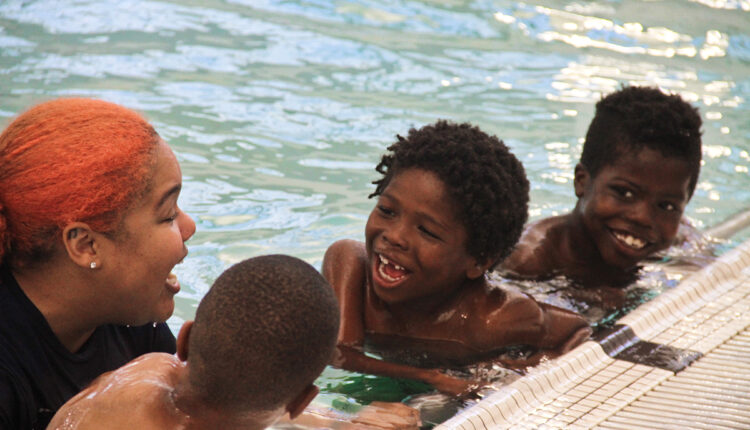 Erlese Mason was not taught how to swim and it nearly cost her life.

As a child, Mason said she came close to drowning in a lake. She became submerged and started to panic. That memory of paralyzing, breathless fear, she said, remains fresh in her mind. As an adult, Mason said being in the water still causes anxiety. She made sure her sons learned how to swim but has never taken lessons herself.

On a recent weekday, Mason carefully watched as children dipped into a swimming pool at the Boll Family YMCA in Detroit. Young boys and girls smiled widely as an instructor guided them through early swimming exercises to get them comfortable with putting their faces underwater and lying on their backs.

Cass Community Social Services and the YMCA of Metropolitan Detroit partner to provide children transportation to free summer swimming lessons. Mason, resident manager of shelters with Cass, said the kids love the lessons and the YMCA pool is the highlight of their week.

The free summer swimming lessons offered by the YMCA are expected to expand over the next three years with a $1 million donation from Rocket Companies CEO Jay Farner. Announced last week, the investment is expected to provide free programming to more than 7,500 youth in Metro Detroit and to train lifeguards and swim instructors.

Teaching children to swim is a matter of survival, Mason said, especially for Black children who are statistically less likely to have access to swimming programs. A 6-year-old Detroit girl was pronounced dead in May after being pulled from a lake at Kensington Metropark, the same area where Mason said she nearly drowned as a 13-year-old.

“They’re learning something very important that can be a life or death situation,” Mason said.

Farner, a member of the YMCA executive committee, said his family has had the “privilege” of  safely enjoying Michigan’s lakes and rivers because they had access to swimming lessons at a young age. Farner said the donation is meant to help address the disparities that prevent many Black children in Detroit from being taught how to swim.

“Everyone deserves the opportunity to learn those things,” Farner said at a press conference last week. “When you think about a city like Detroit, you have to think about the unfortunate legacy of segregation. It really hit me when someone explained that segregated pools meant that many of our African American citizens never had the opportunity to learn to swim. We really want to grow the number of Detroit youth who are strong, safe swimmers.”

According to a 2010 study from the USA Swimming Foundation, 70% of Black children do not know how to swim, which mirrors data collected by the YMCA of Metropolitan Detroit for local children.

Black children are more likely to drown than their white or Hispanic peers, according to the CDC. Drowning disparities are most evident in swimming pools – Black youth are between four and seven times more likely to drown compared to white children, depending on their age.

State data shows 125 people drowned in Michigan in 2020, including 12 children who were under age 14. In Detroit, an average of seven people drowned each year between 2016 and 2020.

James Nicholson, chairman of the Detroit metro YMCA’s ongoing capital campaign, said Farner’s $1 million commitment will have a “dramatic” impact on the landscape of swimming safety. In addition to funding free lessons, the gift helps cover wages for swim instructors and lifeguards which are in short supply.

“We had two years of COVID where lifeguards did not get trained, there’s a dearth of them across the country,” Nicholson said. “It’s going to have a meaningful impact in terms of creating a job source and a job opportunity for kids who would generally not have that sort of summer job opportunity. Every pool in this geography needs lifeguards, and every single one of them has curtailed hours because they don’t have the people to man the space.”

Alexis Townsend, program director and swim instructor at the YMCA of Metropolitan Detroit, said Detroiters can get certified to administer CPR, become trained lifeguards and gain other job skills through the YMCA.

“This gift will not only provide our most vulnerable children access to water safety, but it will also provide aquatics jobs to local residents, which is a very big need right now,” Townsend said.

Nicholson said the YMCA wants to give Black Detroiters the opportunity to become instructors.

“We have to make sure that we put folks who are capable and who are good swimmers who look like the folks we’re trying to serve,” he said.

Helene Weir, president and CEO of the YMCA of Metropolitan Detroit, thanked Farner for the investment in Detroit youth and said she’s excited that child care and youth programs are available after the pandemic caused closures for branch locations and services.

The YMCA of Metropolitan Detroit operates seven facilities in Wayne, Oakland and Macomb counties, each equipped with a pool and educational programming. The majority of the students supported through the investment will be at the flagship Boll Family YMCA in downtown Detroit.

Detroiters should contact the nearest YMCA branch location to learn more about joining swimming classes. The YMCA offers group lessons and private lessons for kids 3 and up at varying skill levels, as well as adult classes and youth swimming teams.

A list of available swimming classes is available online here.

authored by
First published at https%3A%2F%2Fwww.bridgedetroit.com%2F1m-donation-to-teach-7500-kids-to-swim-for-free%2F