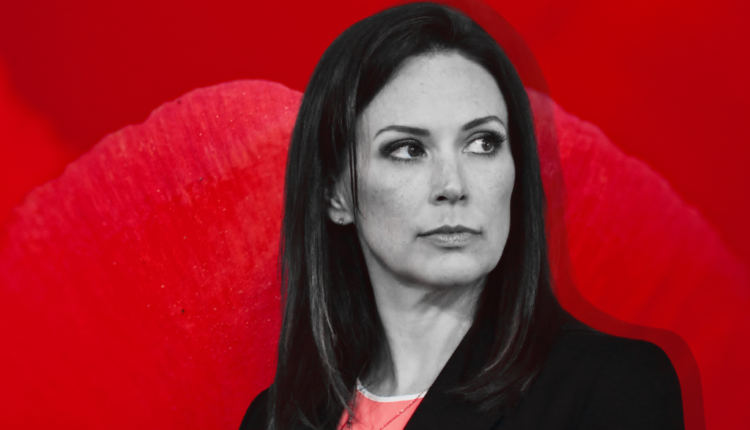 You’re only a real mom if you vote GOP ⋆

Just over 20 years ago, I gave birth to my first child early on in my journalism career.

In the years that followed, I would be told by several editors, some who were trying to be helpful and others who appeared to still reside in the Stone Age, that my decision to start a family with my husband was a very bad professional move.

I pushed on, as women have to do, and worked my way into covering state and national politics. By that time, I was a single mom who had no choice but to bring my daughter to night and weekend events I was expected to cover (which some of my male colleagues sniped was unprofessional, as they happily left most of the parenting to their wives).

Gretchen Whitmer being sworn into the state Senate while holding her daughter, Sydney | Whitmer photo

At one event, I saw then-state Sen. Gretchen Whitmer juggling her kids and we locked eyes, as moms who get the struggle do. I went back to my office and mentioned that moment. An older male reporter rolled his eyes and declared: “I knew she wasn’t a serious person and would never go anywhere in politics when she got pregnant after getting elected.”

That was about 15 years ago. That punditry, of course, hasn’t aged well, as Whitmer is now the 49th governor of Michigan.

Her journey there wasn’t an easy one. For years, Democratic Party leaders had tried to woo her to run for higher office, but Whitmer repeatedly demurred while her daughters were young.

When she did take the leap to seek the 2018 gubernatorial nomination, Whitmer battled intense sexism, both from pundits who couldn’t stop comparing her to Michigan’s only (at that time) female governor, Jennifer Granholm, and from Democratic leaders who fretted a woman couldn’t win after then-President Donald Trump’s surprise 2016 victory here.

Throughout her governorship, Whitmer has endured creepy coverage of her wardrobe and blatant misogyny from GOP leaders like Senate Majority Leader Mike Shirkey (R-Clarklake), who’s dismissed her as “bats–t crazy” and bizarrely bragged about “spanking” her on pandemic orders.

This year, some pundits have trumpeted the gubernatorial election as a feminist triumph, with Whitmer facing right-wing commentator Tudor Dixon.

And indeed, women’s rights are at the forefront, with abortion as the No. 1 issue in Michigan polling, following the Supreme Court sending shockwaves by overturning Roe v. Wade.

Whitmer and Dixon are firmly on opposite sides on the issue, with the governor going to court to ensure the state’s 1931 law criminalizing abortion doesn’t go into effect, while Dixon backs the law and doesn’t favor exceptions for rape, incest or the mother’s health. She’s gone so far as declaring she doesn’t support abortion for a 14-year-old rape survivor because there’s “healing through that baby.”

But any hopes of this race being an uplifting celebration of female empowerment were dashed when one of Dixon’s first public statements after winning the Aug. 2 primary was: “It’s time to elect a real woman in Michigan.”

But any hopes of this race being an uplifting celebration of female empowerment were dashed when one of Dixon’s first public statements after winning the Aug. 2 primary was: ‘It’s time to elect a real woman in Michigan.’

You could dismiss that as just a weird thing to say — because it was — from a political novice.

But Dixon and Republicans have been giddily doubling down.

At a party “unity” luncheon after the primary, Michigan GOP Co-Chair Meshawn Maddock referred to Dixon as a “younger, smarter and hotter” version of Whitmer.

First of all, what an insult to Dixon. The most important thing for any candidate is to stand on their own, but the leader of Dixon’s party casually diminished her as a “version” of her opponent — one who Maddock disparages all the time.

This also could have been a perfect opportunity for Dixon to take the high road and talk about how she and Whitmer may have big policy differences, but she doesn’t support ad hominem attacks. She could have lifted up the historic nature of a gubernatorial contest between two women.

It also would have been a clear message to Republican leaders fed up with Maddock’s classless antics that Dixon was the kind of reasonable politician they could invest in and fight for.

But instead, Dixon smiled and took no issue with Maddock’s comments reducing both women to sex objects, a sign that nothing’s really off-limits this election. Indeed, in her Aug. 2 victory speech, Dixon announced: “This is going to be an epic battle between a conservative businesswoman and mother, and a far-left birthing parent and career politician.”

Let’s upack that. First of all, there’s the usual political doublespeak and exaggeration. Dixon naturally is overplaying her strengths — her business career was a few years at her father’s steel factory that struggled to pay its bills before shutting down completely. She interestingly ignores her careers in film and online commentary, as well as the fact that Whitmer has been an attorney and taught at the University of Michigan, in addition to being governor, a county prosecutor and a leader in the House and Senate.

But Dixon’s real message is that she is a Mom, while Whitmer is a mere birthing vessel. And it’s really an attack on all women who don’t neatly fit into Dixon’s conservative mold.

I guess the heartburn, stretch marks, sleepless nights and hours of labor don’t count for women unless you vote Republican. Neither do all the times we’ve bandaged our kids’ owies, helped with math homework and comforted them when they were bullied in school.

What a kick in the face to millions of moms in Michigan and beyond.

Most of us don’t look at parenthood as part of some epic, neverending political war. It’s simply the best, most challenging and most important job we have.

Part of Dixon’s extremely personal attack is, of course, rooted in health professionals using more inclusive language. But it goes far beyond that. Like several Republicans who ran for governor, Dixon was inspired to after Whitmer’s early COVID health orders, which have been credited with likely saving tens of thousands of lives.

Dixon complained about the struggles of homeschooling kids — which, ironically, is championed by her biggest supporter, Trump’s former education secretary, Betsy DeVos — and emerged as a vocal supporter of the right-wing “parents’ rights” movement.

Most of us don’t look at parenthood as part of some epic, neverending political war. It’s simply the best, most challenging and most important job we have.

A small group of right-wing activists — some of whom don’t even have kids in the districts they’ve protested — have snared attention for flooding school board meetings to complain about COVID health rules (which are now largely a thing of the past). They’ve also gotten books banned on race and LGBTQ+ issues and don’t want those issues talked about in schools.

It’s always seemed less about concern for children and more about angry adults trying to turn everything into a political bloodsport.

Thanks to funding from national right-wing groups, they’ve had some successes in Michigan and across the country. Republicans make the case that these are “real parents” and the only ones worth listening to — as opposed to the vast majority of us who are just trying to keep our kids safe, healthy and happy during a pandemic that’s killed more than 1 million Americans and an attempted 2021 coup at the U.S. Capitol by Trump supporters.

As a former PTA member, the only disagreements I recall were over which restaurant to hold a fundraiser at so we could buy some more instruments for the music program. I can’t imagine trying to do something to help your kids and getting screamed at by people who want to get their 15 seconds of fame on Fox News and even dealing with violent threats against your family.

Parenting is a really tough job for anyone, in any time. The last thing we need is politicians — especially someone like Dixon who wants to run the entire state — declaring war on parents who aren’t in lockstep with her on everything.