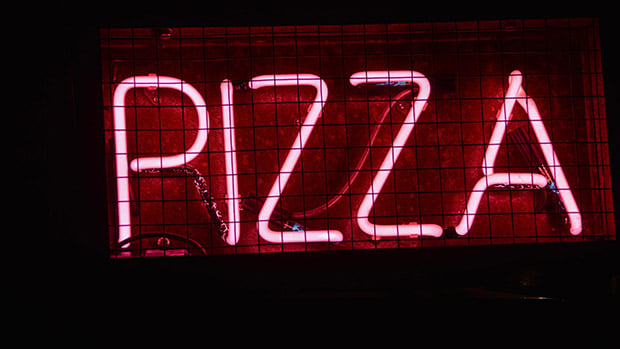 Pizza has three universal and non-negotiable elements: crust, sauce, toppings. Each member of this holy trinity can be executed in any number of different ways, resulting in lim(x→∞) possible pie permutations.

Let us pause for a moment to marvel at how pizza can be simultaneously finite and infinite. And now let us pull in our gaze from this galaxy of pizza-bilities to ponder one particular pie. Brothers and sisters, we are gathered here today to talk about Detroit Deep Dish.

This Is the Whey

First, the order of the toppings is reversed on a Detroit pie, with pepperoni pushed into the dough, then covered with cheese. Tomato sauce gets dolloped on top after the pie emerges from the oven.

Speaking of cheese, it’s not your standard mozzarella but Wisconsin brick cheese (a semihard regionally produced cow’s milk cheese, brick cheese gets its name from the traditional bricks used to press out the whey). Finally the double-proofed, double-stretched dough results in a buttery, airy crust very different from dense, Sicilian-style crust.

Baked together in a deep steel pan, the result is a surprisingly light pie with crunchy exterior, abundant caramelized cheese crisping the edges so deliciously that native Detroiters fight for the corner slices.

The origin story of Detroit pizza traces directly back to Buddy’s Rendezvous, a neighborhood tavern at the corner of Conant and Six Mile Roads.

In 1946 the owner of Buddy’s, Gus Guerra, decided he wanted to serve food alongside the beer and the boilermakers. His Sicilian mother-in-law provided her pizza dough recipe, and (legend has it) a friend who worked in one of Motor City’s auto factories hooked Guerra up with a bunch of the blue steel utility trays used to hold small parts during vehicle assembly .

The famous characteristics of true Detroit pizza — the airy square crust, the crunchy cheesy edges — arise from the thick steel of these unusually deep pans, more similar to a cast iron skillet than a typical pizza sheet, in which the pizzas are baked.

Buddy’s has expanded to multiple locations throughout Michigan, but the original location on Conant and Six Mile is — in the minds and hearts of Detroiters — often imitated but never surpassed.

It’s legendary, plain and simple. Plenty of toppings are available, but most go for the classic square pie baked in the original blue steel pans, topped with charred and curled ‘roni cups, perfectly caramelized brick cheese, and perfect amount of marinara plopped on top.

It’s not exactly next door to KubeCon Central in downtown Detroit, but you can get the legend delivered to your door. 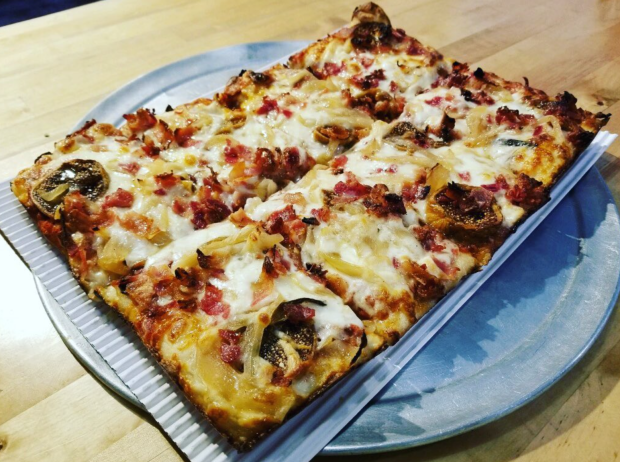 When polling my 313 area code pals for only-in-Detroit foods and not-to-be-missed restaurants, Pie-Sci Pizza was the only place that was on literally everybody’s list of recommendations. It’s basically dietary nerdvana: a rotating, seasonal menu of locally sourced ingredients, made in house everything, and offering dairy-free, vegan and gluten-free options.

If you’re in a hurry, Pie-Sci is famous for its Detroit-style, grab-and-go square boi slices, both carnivore and veggie/vegan. Just pop in and grab one, in and out in two minutes tops. 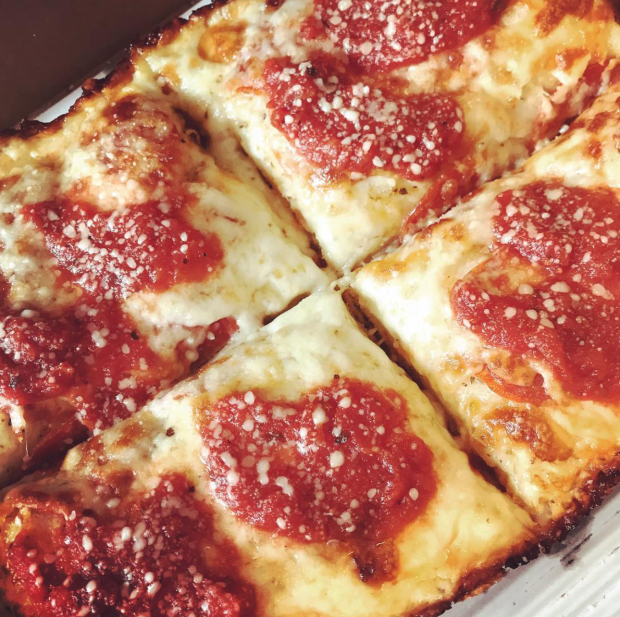 This carryout square pizza spot in the mid-Detroit neighborhood of Royal Oak was co-founded by Shawn Randazzo, who passed away in 2020 after a battle with brain cancer. Randazzo helped put Detroit-style pizza on the map in 2012 when he was proclaimed World Champion Pizza Maker of the year at the International Pizza Expo in Las Vegas.

Palazzo Di Pizza pies are classic Detroit with a twist: the cheese is a blend of traditional brick cheese and mozzarella, though still with dollops of red sauce on top. The real innovation is the “eight corner pizza” (!). Remember how Detroiters fight for the crispy corner slices? At Palazzo di Pizza, they split a large pizza into two small pizzas to 2X that crispy corner action and keep dinner table peace.

Tragically, Palazzo Di Pizza is carryout only, no delivery; you can place orders online for carryout or call ahead to pick up.