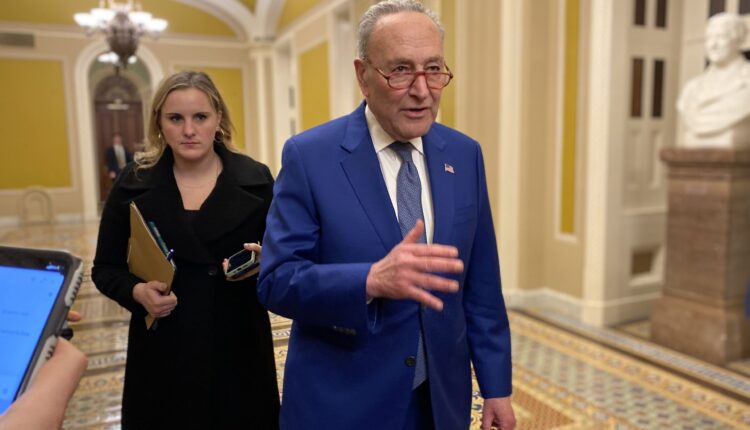 WASHINGTON — Democratic leaders huddled with President Joe Biden at the White House on Tuesday, ahead of what will be a tumultuous few months, with lawmakers sharply divided on the debt limit and short on time.

“I have no intention of letting the Republicans wreck our economy, nor does anybody around this table,” Biden said at the beginning of the meeting.

Senate Majority Leader Chuck Schumer, a New York Democrat, said after the White House meeting that Democrats “resolved to show contrasts” between Democrats and Republicans and that the House GOP needs to “show us their plan” with respect to the debt limit.

The country reached the debt limit earlier this month. Ever since, the Treasury Department has been using accounting maneuvers called extraordinary measures to continue paying all of the country’s bills in full and on time.

Treasury Secretary Janet Yellen expects those will hold off a default until at least early June, giving Democrats and Republicans a few months to broker a deal.

Speaker Kevin McCarthy, a California Republican, promised members of his conference that he would not agree to a debt limit deal without a budget agreement or “commensurate fiscal reforms.”

The White House has largely rejected that proposal, made between McCarthy and far-right members of his party, saying that Biden will not negotiate on the debt limit.

Senate Minority Leader Mitch McConnell, a Kentucky Republican who has negotiated several bipartisan debt limit deals, essentially bowed out of this year’s talks on Tuesday, leaving it at Biden and McCarthy’s feet.

“I can’t imagine any debt ceiling provision passed out of the Senate with 60 votes could actually pass this particular House,” McConnell said, referring to the benchmark for bills to move past the legislative filibuster.

“So I think the final solution to this particular episode lies between Speaker McCarthy and the president.”

McConnell added he believes “it’s entirely reasonable for the new speaker and his team to put spending reductions on the table,” though he declined to join in the endeavor.

“I wish him well in talking to the president,” McConnell said. “That’s where a solution lies.”

Schumer said that he mostly agrees with what McConnell said earlier in the afternoon.

“McConnell made the argument for us,” Schumer said. “He says the House has to go first. We’re just taking that one little step further and saying, yes, not only they have to go first, they have to show us a plan.”