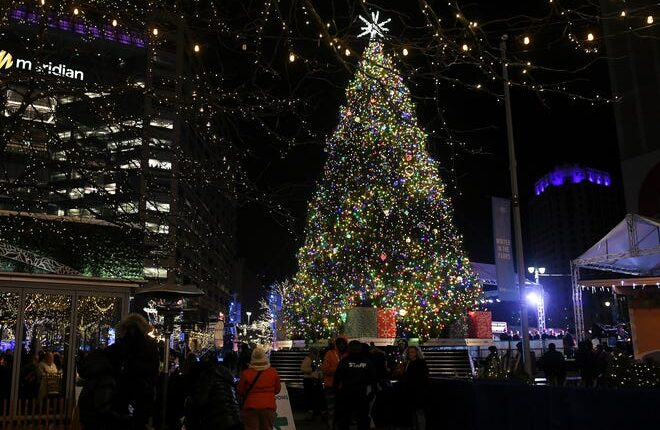 Detroit — As a few snow flurries and frosty temperatures set the mood, the Motor City on Friday ushered in the holiday season with its 19th annual Detroit Tree Lighting.

Thousands huddled together in Campus Martius Park awaiting the illumination of the 65-foot northern Michigan-grown Norway spruce, covered in 20,000 multicolored lights and scores of ornaments.

While waiting for Santa to count down the lighting, Lauren Sanders, 36, of Warren, was excited to come back to her hometown and carry on a welcome ritual.

“My parents brought me years ago, so it’s only right that I bring my daughter. It’s a family tradition tradition,” said Sanders, who brought her 13 year-old daughter London. “The sledding, the hot chocolate station, the skating rink, the music — it’s just really beautiful around here this time of season. It’s cold, but it’s beautiful.”

An estimated 100,000 fans from around the state flocked to the ceremony coordinated by the Downtown Detroit Partnership and DTE Energy Foundation.

After a few years of skipping the event, Jessica Newborn, 38, said she was eager for new members of her family to experience the joy of the gathering for the first time.

The rest of her kids went when they were smaller, but the magic is just starting for the babies, the Detroit resident said.

Newborn and her family were among thousands of families who enthusiastically wanted a picture with Santa.

That was just part of the fun on the bitterly cold night.

Emmy-winning singer and actor Darren Criss, best known for his role in the TV series “Glee,” sang songs from his holiday album, “A Very Darren Crissmas.”

Other musical acts filled the air with sounds of the season, including vocal and instrumental talents.

American figure skating champion Mariah Bell, who represented the US in the 2022 Olympics, performed for attendees. Several skating groups of varying ages also showcased their talents under the glow of numerous gold lights hung around the ice rink.

Following the tree lighting, the Rink at Campus Martius Park officially opened for the winter season.

The popular destination is open seven days a week, including holidays, through March 5.

The Eight: A Status Update On The (Many) New Hotels Bound For Traverse City