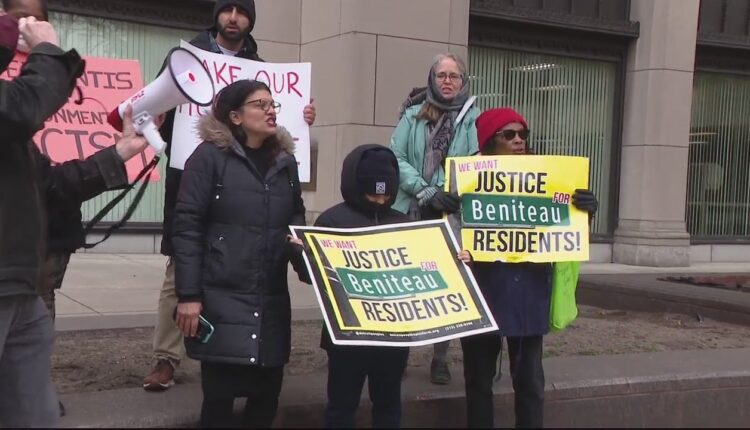 People who live near the Stellantis plant on Detroit’s east side are not happy with how the state is punishing the automaker for pollution. Congresswoman Rashida Tlaib called it insulting.

“How many? How many violations will it take to stop the production?” Michelle James said.

Officials with the Michigan Department of Environment, Great Lakes, and Energy held the hearing after enforcement against Stellantis. However, some feel the punishments aren’t enough and the automaker is getting off easy.

“I know that you don’t want to hear this, but I’m just going to tell you the way it is, that our rules and regulations don’t allow us to shut a company down like this,” said Jenifer Dixon, with EGLE.

EGLE is hammering out a consent order with the automaker after its Mack Avenue plant on the east side violated air quality rules several times over the past 13 months.

“People can’t even go outside just to sit on their porch because they’ll just get a headache, a nose bleed, it is disgusting,” Congresswoman Rashida Tlaib said.

Tlaib was one of about a dozen Detroiters who slammed the consent order at the hearing.

Fumes emitted from the plant’s paint shop took a toll on people living nearby.

Stellantis will spend $212,000 thousand to plant and maintain more than 80 trees at a nearby park and purchase and install a new building management system for Southeastern High School. The automaker would then pay a $63,000 fine to the state.

Residents say that money should go to them.

“EGLE should be prioritizing repairs for residents –fund home repairs or funding for voluntary relocations of these residents as well because this is a quality of life issue,” Renard Monczunski said.

Some say the consent order amounts to a slap on the wrist.

“You can’t support the people that you were designed to and the money come to you for if you’re bending over for corporations,” Robert Shobe said.

Tlaib called the talk of planting trees insulting, given the number of violations the company had had.

“The problem here is there’s no deadline when they put the pollution controls in, they have six violations alone just in the last 13 months then they keep talking about planting trees and it’s so insulting to my residents,” she said.

EGLE officials say Stellantis cannot install an RTO, which would reduce odors from the plan until the consent order is approved. At best the unit would not be up and running until late spring or early summer.

“We have been breathing this toxic air for over two years, we cannot wait another six months, eight months,” Rhonda Thesis said.

Tlaib says pollution controls should’ve been in place from the very start like they were at the Stellantis plant in Warren.

“I mean I want everybody to breathe clean air but I really think it’s a predominantly Black neighborhood and unfortunately when folks talk about applicate applying enforcement I always feel like it’s always different when it comes to a community of color,” she said.

EGLE officials say they are still keeping an eye on emissions at the plant, and they will be accepting input from the public on the consent order until Nov 2.

“Stellantis is pleased that a proposed Consent Order has been reached with the Michigan Department of Environment, Great Lakes, and Energy (EGLE) Air Quality Division. The terms of the agreement will allow us to make additional investments in the community as part of two Supplemental Environmental Projects (SEPs), based on feedback we received. We are eager to see the benefits these projects will bring to the community.

“With regard to the emissions controls, here is our statement:

Save The Date: November Recess AT GR Auto Gallery!