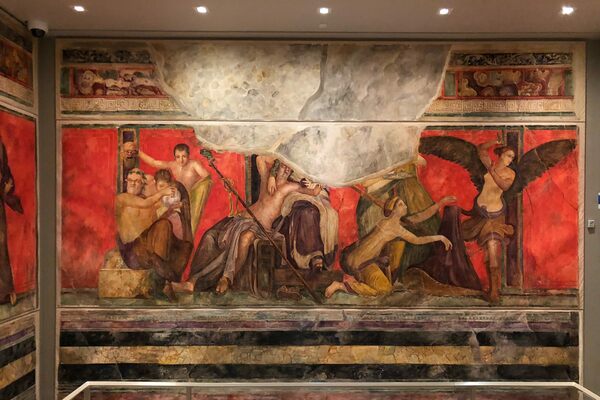 In 1909, archaeologists dug the The city of Pompeii discovered a Roman villa that still contained frescoes painted on the walls of one of its rooms. The artwork showed the mysterious rites of a religious cult associated with Dionysus. The pictures included scenes of women romping with fauns and winged figures and experiencing ritual ecstasies, dances and scourges. Researchers called this apartment the “Villa of Secrets”.

In 1924, the archaeologist Francis Kelsey commissioned the Italian artist Maria Barosso to create a replica of the wall paintings. Using watercolors, Kelsey painted 21 panels of paper-on-canvas that could be pieced together to reproduce the look of the room, including any cracks, flakes of plaster and other imperfections that were present when the mansion was first excavated.

Kelsey intended to display the replica frescoes at the University of Michigan but passed away in 1927 before they arrived on campus. When the pieces arrived at the school, they were kept in the archeology museum, which was supposed to bear Kelsey’s name. They stayed there for decades, with individual panels brought out for educational purposes and two brief exhibitions.

In 2005, the museum received a sizeable monetary donation that enabled them to set up a special exhibition space that would eventually display all of Barosso’s paintings in full. This allows visitors to get a sense of what the frescoes would have looked like when archaeologists came across them in the early 20th century.