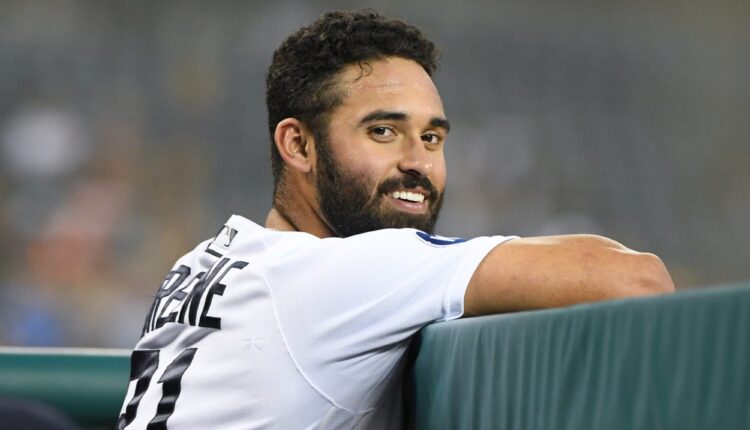 Did the former Detroit Tigers top prospect fail to live up to the hype?

There were highs, there were lows, and there was a lot of “meh” in between. Nothing went according to plan for the Detroit Tigers this year, and that includes the debut of former top prospect Riley Greene.

He was supposed to make the Opening Day roster, where he would have made his big league debut alongside fellow rookie Spencer Torkelson. But a fractured foot after fouling a ball off of it late in spring training put a wrench in those plans, and he missed the first two months of the season.

He was sent to Triple-A Toledo when he was ready to return to get back up to speed. In 15 games, he slashed .274/.338/.387 with a 95 wRC+ in 68 plate appearances. In other words, he was slightly below average. But there was no real worry at the time, as he was just coming back from a major injury.

On June 17, the Detroit Tigers decided that it was time to give Greene his first taste of big league baseball. He debuted the next day against the Texas Rangers, where he hit a bloop single on the second pitch he saw. This was one of many highlights for the 21-year-old throughout his first season.

On July 2, he hit his first major league homer—a walkoff bomb to dead center against the Kansas City Royals. He ambushed Shohei Ohtani on Aug. 21 with a first-pitch nuke that went close to 450 feet to right center.

He showed off his defensive prowess numerous times throughout the season, making diving play after diving play. His talent cannot be denied.

The strikeout rate was high, but it was a bit elevated in the minors as well, so we knew that coming in. He also walked at an 11-12% clip in the minors, but had just a 8.6% walk rate in the big leagues this season, which is still above average, but not by much.

He also went through long stretches where he looked lost, which is not at all uncommon for a young player, but he just didn’t live up to the billing of a top prospect.

Other rookies like Adleyrutschman and Julio Rodriguez flourished in their rookie campaigns. Even Bobby Witt Jr. had a solid first season in Kansas City. But Greene was just kind of…average.

Now, is this cause for long-term concern? I don’t think so. The foot injury really put a damper on things this year. His process was disrupted. You have to wonder how much it affected him as the season went on. Fangraphs projects that he would have had a 2.2 fWAR and a 104 wRC+ had he played a full season, or 141 games worth in this case.

He’ll have a new (and hopefully better) hitting coach next season, so that’ll help. Again, the talent is there, and it was on fully display at times this season. He just needs to put it all together.

According to his baseball reference page, Greene has retained his rookie status for next season, which is somewhat surprising given the amount of ABs he had. But good for him. Perhaps he could win Rookie of the Year in 2023.

Riley Greene is a generational talent. His success is paramount for the Detroit Tigers going forward. He is one of their foundational pieces. Hopefully we’ll see some improvement from him next year.