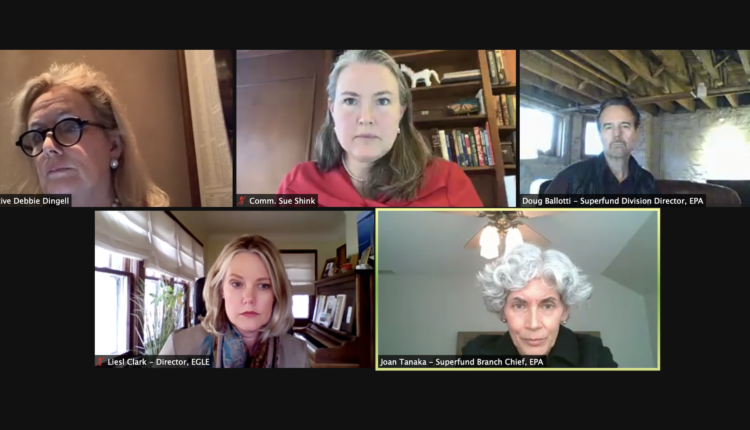 Native, state and federal officials are organizing a briefing about the Ann Arbor dioxane flag

Dingell was joined by representatives from the United States Environmental Protection Agency and the Michigan Department of the Environment, the Great Lakes, and the Department of Energy, all of whom were in attendance to answer questions from community members and to discuss the status and future of the cloud. The event precedes a court The hearing is due to take place on Monday to hear arguments from Gelman’s attorneys about possible changes to the current amended consent judgment.

A big topic of conversation throughout the meeting revolved around the fourth August consent form rejected by Ann Arbor City Council in October 2020. The proposed deal called for increased monitoring and purification of dioxane by expanding prohibited drinking water zones and increasing well rates to monitor cloud migration, which opponents argue does not purify the water system adequately.

The history of the cloud dates back to 1958 when the late Charles Gelman began making microporous filters in Ann Arbor. The company used a chemical called 1,4-dioxane during the manufacturing process, dumped its waste in an above-ground location, and that waste eventually seeped into the ground and polluted the groundwater at the company’s Scio Township facility. 1,4-Dioxane was discovered in 1984 by Daniel Bicknell in Third Sister Lake east of the Scio Township plant while doing research at the University of Michigan.

Since the spill, the dioxane has spread to a large subterranean pollution cloud in northwest Ann Arbor. Dioxane is a probably carcinogenic and can cause kidney, liver damage and breathing problems.

At the beginning of the meeting, Dingell discussed the confusion that has arisen over issues related to the Gelman Cloud and highlighted the frustration of elected officials and parishioners over Gelman’s lack of transparency regarding the issue. She noted that recently elected officials and voters heard various things from lawyers and officials involved and that this meeting needed to be a place where the records were corrected so that everyone could be on the same page.

“We need to hear the same information and answers in every ward today,” said Dingell. “EGLE and the EPA … need to hear from the community with one voice.”

EPA’s Assistant Director Joan Tanaka then discussed the Gelman Cloud’s qualifications as a Superfund site, which would mean the EPA would take care of cleaning up the contaminated sites. The federal takeover would ensure Gelman is held accountable for cleanup operations and would be responsible for reimbursing the EPA for the cleanup operations, Tanaka said. Proponents of federal intervention have argued that Gelman was not held accountable for properly cleaning up the pollution.

Tanaka next set the timeline for how the situation at Ann Arbor would qualify as a Superfund location, which she believes could be ten or more years. In December 2020, Ann Arbor City Council sent a letter to Governor Gretchen Whitmer asking the state to petition the EPA to add the cloud to the National Priorities List’s Site Listing Process. By approving the site on the NPL list, the EPA can then step in and begin investigating the level of contamination and how it can be effectively removed, Tanaka said.

“We know the Gelman Cloud is an important issue for all of you, and so does it for us, regardless of our roles,” said Tanaka.

The city is currently litigating in the Washtenaw County Circuit Court while awaiting approval from Whitmer to carry out the EPA cleanup plan. Currently, the site is a state-leading site, which means that EGLE is responsible for monthly sampling of wells in residential areas to check for dioxane levels. The fourth approval rating would also require Gelman to reimburse EGLE for the sampling program.

Much of the meeting was devoted to answering pre-submitted questions from community members, which were forwarded by Jason Morgan, chairman of the Washtenaw County Board of Commissioners. A question was asked by Michael Moran, head of Ann Arbor Township, what other councils can do besides the resolutions to get Whitmer to write a letter of compliance so that the EPA qualifies the site as a Superfund site and is on the Website is put on NPL list.

Cheryl Newton, acting EPA administrator for Region 5, stepped in to answer the question, saying the Gelman dioxane plume is a unique problem and that the EPA will continue to support Michigan state efforts to raise the flag take care of.

“I want to make sure everyone can hear loud and clear that our goal is to take advantage of the uniqueness of this and optimize it,” Newton said. “And that includes supporting Michigan’s efforts to put more safeguards in place under their state authority as the review continues under the National Priorities List (NPL) process.”

The meeting was then moved to a section for public comments.

Ann Arbor-resident Roger Rayle, co-founder and chairman of Scio Residents for Safe Water and a member of the Washtenaw County Coalition for Action to Clean Up Dioxane, spoke during a public comment about the need for the state and EPA to make a real effort to clean up The dioxane.

“I’ve worked on this site as an unpaid volunteer citizen for over 27 years. It’s time for the compliance letter to come in and move on with the process because what happened is getting really old and unacceptable,” said Rayle.

Councilor Kathy Griswold, D-Ward 2, spoke during the public comment section, indicating the need for the EPA to step in and work to hold the perpetrator accountable. She also commended elected officials in the region such as herself for strengthening and passing their resolutions and writing letters to the governor.

“It’s really easy for me,” said Griswold. “We have stricter polluter-pays laws at the federal level, and that’s why we need to bring in the EPA. At the same time, I look forward to EGLE and the EPA working together, and I can tell you that no one works more worried and harder than the elected officials who tabled these resolutions and letters (to the governor who asked them to petition the EPA to work to include it on the NPL list). ”

Councilor Jeff Hayner, D-Ward 1, also spoke in the public comment section, criticizing the state for not treating the problem well enough and the polluter for not effectively cleaning up the dioxane. He also noted that he felt that the fourth approval rating was not good enough to address this issue and expressed his disapproval.

“We have missed many, many opportunities in which the culprit has violated the existing things in the third approval judgment as an example,” said Hayner. “All of this is a drag-out game for the polluter … We can no longer allow it.” Of course we want something better. If the fourth approval rating had been better, we would have approved it. But it ain’t, it ain’t better And we reject it and I reject the idea that the state will offer protection. Protection is no longer enough. ”

The meeting ended with a comment from EGLE Director Liesl Clark, recognizing the need for the meeting and highlighting the success of the meeting in getting everyone on the same page.

“That was necessary,” said Clark. “I hear the resolutions, we read the resolution letter, we see the letters, and then we have various discussions. This was very helpful in demonstrating where everyone is. We look forward to moving forward too. “

The daily employee Julia Forrest can be reached at [email protected]

Sign up for our daily newsletter to get the best stories from The Michigan Daily delivered to your inbox here and our weekly newsletter here.