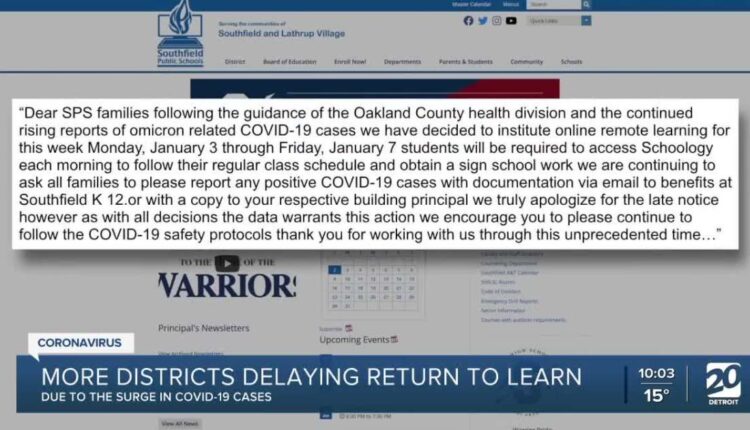 Just hours before the end of the winter break, Southfield Public Schools contacted parents saying the district would delay returns to face-to-face learning due to rising cases of COVID-19.

They are joining a growing list of school districts including Ann Arbor, Detroit and Pontiac that are closing their buildings this week.

“The decision itself was basically all about being sure,” said Gill Garrett, president of the Pontiac School Board. “The numbers kept increasing.”

Pontiac was one of the first districts to announce its decision last week. They will only be virtual until January 18th.

Garrett says all students have a Chromebook at home that they can go virtual with.

However, the Detroit Public Schools Community District says many of their students don’t have laptops, so virtual isn’t an option. Instead, they will be completely closed until at least Wednesday and all staff will need to be tested before a decision to return is made.

“I think it will be at least a week before we finish testing to get results and have all of the necessary components to keep people comfortable and safe when they return,” said Terrence Martin, president of the Detroit Federation of Teachers.

The announcements come after the Michigan Department of Health and Human Services sent a letter to all school principals asking them to be extra careful, masking them, and offering tests when they return from break.

On Sunday, Dr. Anthony Fauci on ABC’s This Week, saying he feels that these tools and vaccines can open schools.

“All of these things taken together is safe enough to get these kids back to school against the harmful effects of keeping them out,” said Dr. Fauci.

As the week progresses, these districts say they will continue to monitor climbing falls in hopes of getting the kids back to the classroom as soon as possible.

“There’s a lot of learning loss when you go into the virtual world, let’s face it,” Garrett said. “However, it’s about protecting our children.”

The Detroit Public Schools Community District offers free tests to students and staff in 10 locations, including: