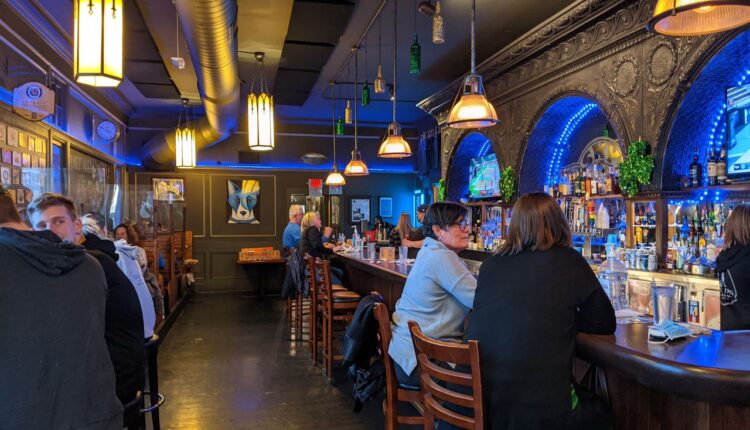 GRAND RAPIDS, MI – A staple on the west side of Grand Rapids, the Blue Dog Tavern is a treasure trove of history, hot dogs, and hospitality.

The tavern, founded in 2014, is located in a building marked with the etchings of the former bank that occupied the room with a matching vault door in the 1930s. General Manager Josh Glazier said early on that he wanted the Blue Dog to break away from the “sterile” feel of box chain bars and make it more like a home away from home.

“When the boys got together and we put the Blue Dog together, we liked things that tell a story,” said Glazier. “In addition to the food, the drinks and the people, it is our interior.”

What that looks like is a wall of vintage cigar boxes, a collection of beer delivery receipts from the 1930s and 40s, lights from a converted Grand Rapids church, and a crowning back bar from a captain’s base in the north.

The tavern on 638 Stocking Ave. NW was also originally founded on their hot dogs and tater tots, which Glazier said often give a twist to the classics. He said Blue Dog was taking the classic equation of meat, cheese, and vegetables and turning it on its side.

“There are a lot of unique things that we think a lot of people have already made with burgers and sandwiches – twisting them and modifying them and using different breads,” said Glazier. “But if you go to a hot dog, here is your hot dog, here is your plain side of Tater Tots. This is great, but people’s tastes and needs want to evolve over time and we like to try to make sure we keep a good mix and rotation. “

The result is menu items like the $ 8 Loaded Dog, which features a beef hot dog with cubed bacon, charred onion aioli, a flavorful ranch, homemade onion jam, green onion, and cheddar cheese on a pretzel bun.

That creativity extends to burgers, which, according to Glazier, follow the same philosophy.

A crowd-pleaser is the $ 13 J-Dawg Burger, which fills a seasoned patty with jalapenos, onions, buffalo sauce, and BBQ sauce before pairing it with bacon, cheese sauce, and grilled garlic butter aioli on a pretzel bun.

The signature cocktails at the Blue Dog Tavern came from bartenders and customer preferences. Many of their staples are classic recipes named after a bartender with their signature twist.

“It’s surprising because it’s going to be the same recipe, because customers come in and ask one of the servers,” I want the Jeremy Grape Bomb or I want the Mak Bomb, “said Glazier. what our customers have come to know and love, get their own signature drinks. “

The Grape ‘Jeremy’ Bomb plays with a simple bomb and offers grape vodka, a mixture of schnapps and Red Bull. Liv’s signature Cherry Limeade Bombs, on the other hand, combine Red Bull with cherryodka, lime juice and a sour mixture.

The drinks are just one example of the relationship between Blue Dog Tavern and the community, Glazier said. Regulars will take on jobs to repeat steps or put up disguises to integrate into the Blue Dog family, he said.

While COVID-19 restrictions have reduced capacity and forced visitors to sit half a meter apart with partitions between the cabins, the Blue Dog Tavern is about connecting the community over a drink and a dog, according to Glazier .

“It’s the place everyone in the neighborhood wants to go,” said Glazier. “You know the employees, we know them. It’s not just a bar and restaurant – it’s people’s second home. “

The Blue Dog Tavern is open seven days a week. You can reach them at (616) 608-6050 or on their website www.bluedogtaverngr.com.

The Dutch restaurant ignored the ban on dine-in service, says the judge in maintaining the suspended license