After Farhan Sheikh-Omar arrived as a Kenyan refugee 15 years ago, he grew up in Lansing and protested against police brutality and racial justice in the city.

Activism enabled Sheikh-Omar to bring about change from within and led him to run for Mayor of Lansing in the November 2nd elections.

Sheikh-Omar has run two failed campaigns running for the House of Representatives in the past – District 68 in 2018 and first town councilor in 2019 – but his recent experience falls outside of official positions.

Last February, he led protests after Uwimana Gasito made excessive charges of violence against officer Andrew Stephenson, which led to an internal investigation within the East Lansing Police Department. He also protested in the summer months following the May 2020 murder of George Floyd in Minneapolis.

Farhan Sheikh-Omar, who lives in Lansing, speaks to police officers seated in the audience during the public comment section of the meeting about the internal investigation into the use of excessive force in the arrest of Uwimana Gasito on February 27, 2020 at 54B District Court.

“This summer, after my friend was beaten up by the East Lansing police, I was heavily involved in ensuring that the East Lansing police department was structurally reformed,” said Sheikh-Omar. “We have achieved a lot. We made sure that the policeman who was responsible for 41% of all public complaints was no longer patrolling the streets. “

Upon internal investigation into the incident, the ELPD concluded that there was “insufficient evidence” to prove or disprove the excessive violence allegations. However, East Lansing plans to set up a Police Oversight Committee to handle incoming reports on police complaints.

The investigation has now been transferred to several public prosecutor’s offices. Michigan State Police filed a warrant request with Ingham County’s attorneys in June asking for a review of Stephenson’s actions. The Jackson County Attorney’s Office was originally brought into the case, but the investigation has been referred to Washtenaw County’s Assistant Attorney Steven Hiller. Hiller concluded in September 2020 that Stephenson’s use of force was warranted, according to the Lansing State Journal.

According to Sheikh-Omar, Lansing is currently facing three crises: racism, COVID-19 pandemic and lack of leadership.

Community members urged Schor to resign this summer for alleged negligence of racism. Since then, he has founded the Mayor’s Alliance for Racial Justice and Justice and has held community input webinars to discuss racism and police reform in the city.

Regarding COVID-19, Sheikh-Omar said that both neighbors and neighborhoods are still dying. He promoted the spread of the vaccine but also wants to boost the businesses by providing more grants to help them survive.

One of the main issues that Sheikh-Omar said is wrong in the current administration is the lack of transparency and accountability.

His solution was to make his campaign self and community funded. 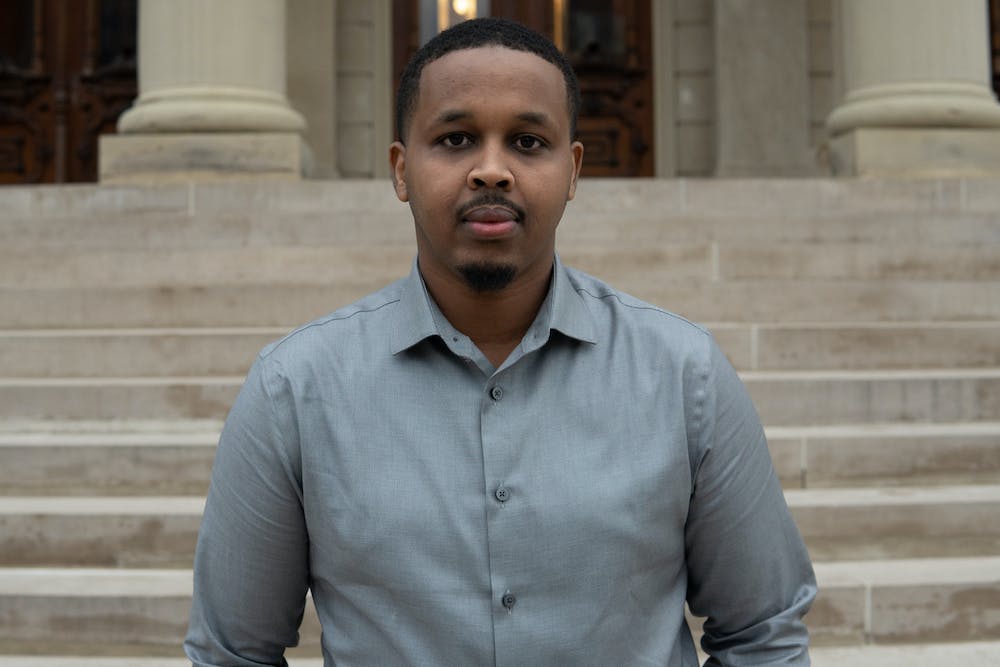 Farhan Sheikh-Omar stands on the steps of the Michigan State Capitol on March 10, 2021. He announced his candidacy for Mayor of Lansing on March 22nd.

Sheikh-Omar wanted his path to be the opposite of Schor’s 2017 mayoral campaign, in which more than half of Schor’s donations came from outside Lansing.

“I will not accept money from large donors or lobby groups,” he said. “I think it is important that if I am elected, or whoever is elected, that people’s work is done strictly. I am willing to use my time and money, my own money, to get my message across and make sure we choose someone who is not in the status quo. “

He said public safety begins with police reform, which means Lansing needs to change the way the police are supposed to react.

“We cannot ask our police officers to deal with public health issues such as substance abuse, homelessness and mental illness,” said Sheikh-Omar.

According to the city’s website, the Lansing Police Department is the first division in the state of Michigan to hire a social worker for its employees. The social worker “acts as a bridge between the police and the city’s many authorities working on behalf of the homeless, mentally ill and addicted citizens,” the website says.

Sheikh-Omar said expanding the number of social services that respond to incidents was a form of police reform. Lansing currently has only one social worker on the police force. 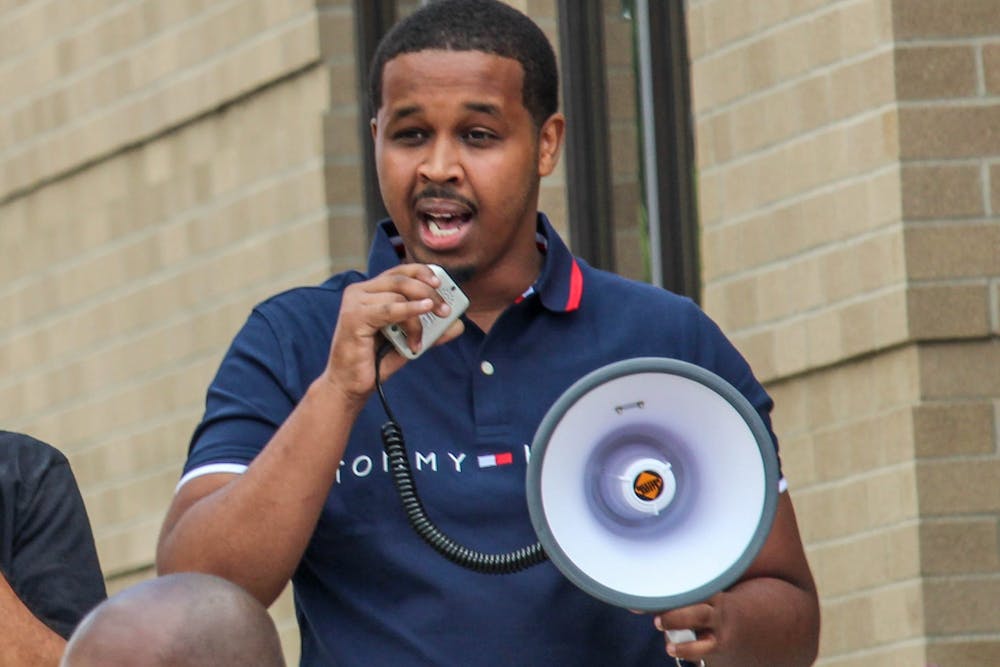 Farhan Sheikh-Omar will give a speech outside the ELPD on June 24th, 2020 on the March Against Fear.

Ultimately, Sheikh-Omar said he was a concerned citizen who understood where he stood in the experience compared to the other candidates but would not let it deter him. He believes this is his chance to disrupt the cycle he has seen since arriving in Lansing.

“We are surprised when we see the same cycle and results,” said Sheikh-Omar. “You know, we are dealing with the same things: bad infrastructure, bad schools, racist cops, houses that are too expensive. We are dealing with homelessness. All of these things are things that we deal with as children It just tells you what you need to know about these politicians. They put parties before people, they put reelection before people, they put money before people and that’s not how I work. I put people first, and that’s what i do i’m all over. “

At the moment, Sheikh-Omar said he was looking to the future.

“Lansing needs a fresh start,” he said. “I believe the person who should get this fresh start should be someone who is well connected to the community, who knows what the community needs, and who actually listens to and fights for the community.” 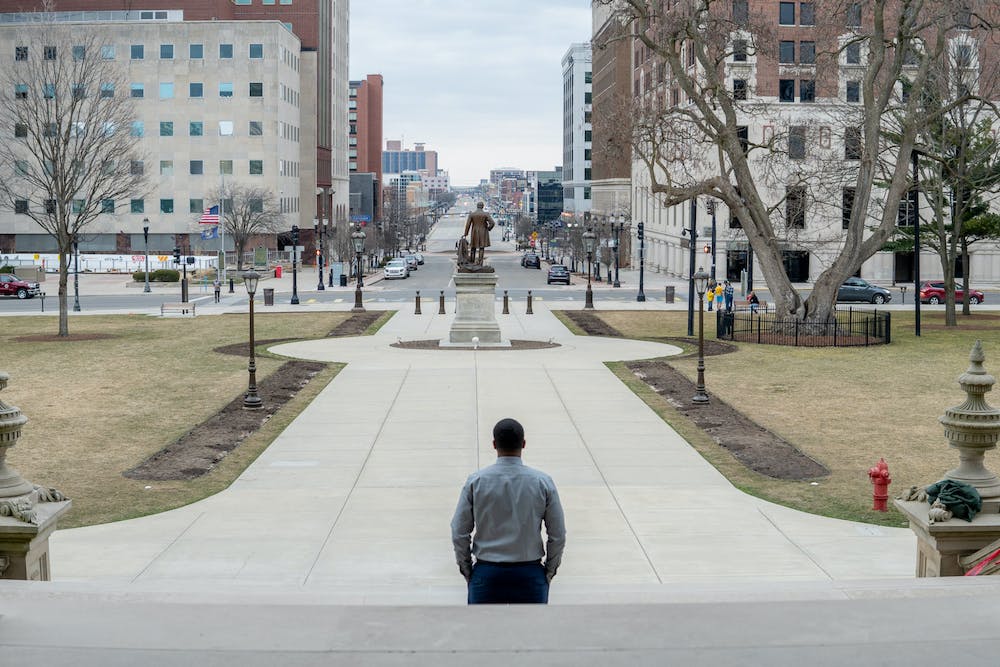 Farhan Sheikh-Omar stands on the steps of the Michigan State Capitol on March 10, 2021. He announced his candidacy for Mayor of Lansing on March 22nd.