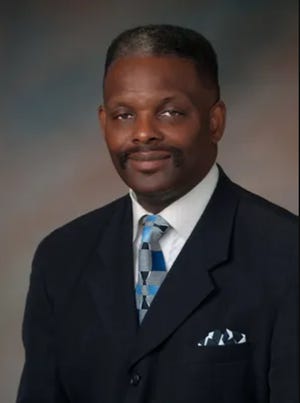 On the first Sunday in December in 1979, he had come to a new church only to find the crowd was himself and, behind a small podium, David Maxwell, preaching in a small basement off South Magnolia Avenue in Lansing.

Maxwell, Fomby said, kept preaching that day. And he preached the next week. And the next. And soon enough, plenty of people came to hear Maxwell preach.

Forty-three years later, on the first Sunday in December, Fomby stood behind a podium as he mourned the death of Apostle David W. Maxwell, known to most as Bishop Maxwell or just plain Bishop. Maxwell, 66, who led Eliezer Temple Church on W. Jolly Road in Lansing and Bishop David W. Maxwell Ministries on social media, died Thursday.

In the years since that lonely 1979 morning, Maxwell expanded his ministry far beyond a basement church to include radio, television and social media ministries as well as Eliezer Temple Church.

He helped to plant sister churches in Ohio and Philadelphia. And he was a spiritual leader whose influence could be felt in the halls of government, leading the City of Lansing’s Office of Community and Faith-based Initiatives for more more than a decade across two administrations.

Fomby will be leading the church as interim pastor, he said, and he delivered the first sermon after Maxwell’s death on Sunday.

Maxwell should be remembered for his powerful sermons that would build on history and pack in depth, Fomby said.

Maxwell’s ministry ranged from large forums like the radio and national conferences to one-on-one encounters, said Charles Artis, an evangelist at Eliezer Temple.

Artis once traveled to Ohio with Maxwell and when a woman on the side of the road began washing her car window, both men left the car and prayed with her. She told the men she believed their preaching would save her. Artis said he has never forgotten that encounter or how Maxwell’s ability to connect with people was special, allowing him to reach so many people, Artis included.

Melvin Jones, a retired pastor of Union Missionary Baptist Church in Lansing, considered Maxwell a close friend. They first met in Lansing 37 years ago. They worked together through the Greater Lansing Clergy Forum, with Maxwell becoming the conference’s political arm.

“But more than that, he was a personal friend of mine,” Jones said. “We shared a lot of theological thought. We were two different denominations. It was interesting to debate theological truths as we knew them.”

Jones can remember sitting for debates on issues through the years with Maxwell, often with Jones on one side of an issue and Maxwell on the other, but rather than becoming rivals, they listened to each other’s thoughts and remained close friends, he said.

“Even though we had different theological views, we remained very close as brothers in the ministry,” Jones said.

Maxwell was a “conscientious” man, Jones said, and an advocate who loved his community and worked with other clergy members in the city to make sure justice was served for every resident.

Maxwell served the mayor’s office and the city of Lansing for 16 years, according to a Facebook post from Lansing Mayor Andy Schor, serving under both former mayor Virg Bernero and later for Schor, with the goal of bringing the religious community and city government together to help those in need. He was the first and only director of the Office of Community and Faith-based Initiatives.

“Through his vision and dedicated work, Bishop Maxwell helped bring people of all faiths and walks of life together to benefit those in need,” Bernero wrote on Facebook. “To Bishop Maxwell, the word “impossible” did not exist.

“Bishop Maxwell believed in people and their potential to change and grow through faith and action. He believed in Lansing and its capacity to address the needs of all residents, leaving no one behind.”

Schor said Maxwell made a difference in his 16 years in the mayor’s office.

“His wisdom, foresight, and humor were so appreciated by everyone who knew and worked with him in City Hall,” Schor wrote. “Bishop was truly a servant of God and of the people in our community.”

Speaking to an empty chair covered in black fabric, draped with a purple cloth and with a microphone laid on it at the front of Eliezer Temple on Sunday, Fomby recognized his former pastor as a “preaching machine” and prayed for the chair and the congregation .

“You may not see it with your eyes,” Fomby said, “I am in the midst of my sorrow, my grief and pain.”

Woman lifeless, man injured after being shot on Detroit’s west side