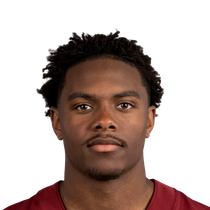 Jahan Dotson caught four of his five targets Sunday for 59 yards and a TD on Sunday.

Dotson was the beneficiary of a really solid game script as the Commanders were in the hurry-up offense for the entire second half. He managed to grab a TD for the second straight week and was on the receiving end of a two-point conversion as well. Dotson has clearly earned the trust of Carson Wentz, and you should consider starting the rookie as a low-end flex play moving forward.