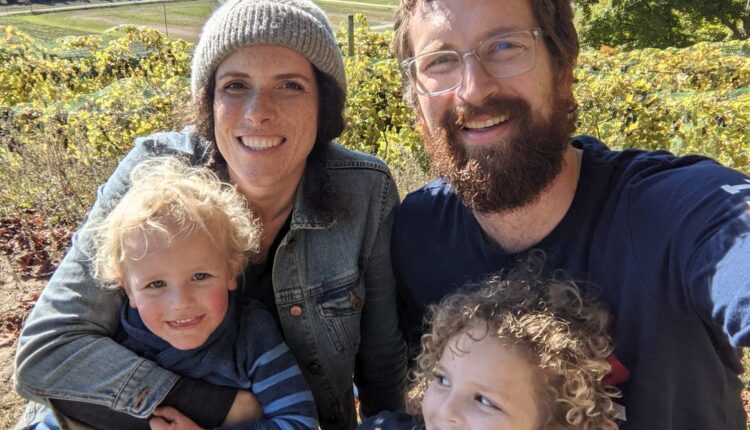 As we’re freelance filmmakers, our decision to move from our industry’s mecca, Los Angeles, to the Midwest was a risky one. But in 2018, after five years in California, we crammed our Jetta with a fermenting scoby, our 1-year-old, and all our belongings and drove to Detroit.

From 2014 to 2017 we lived in downtown LA and rented a trendy studio apartment with exposed brick and a ladder to the roof for gazing at the city lights. We took advantage of California’s free activities: ocean swims, mountain hikes, and camping in the desert.

Our work started locally but gradually moved to more widespread locations around the country and the world. Unfortunately, what these traveling jobs offered in adventure they lacked in sufficient compensation.

Each paycheck was drained by monthly expenses

Friends and family back home in the Midwest thought we were living a glamorous life — but in reality, a lot of our time in LA was an experiment in cutting corners financially.

Our starving-artist lifestyle seemed even less tenable when our daughter was born in 2017.

The cozy apartment now seemed stifling as we faced where to put the bassinet. Three days before my daughter was born, we moved to Glendale, a suburb of LA, and paid $1,600 monthly for a one-bedroom apartment.

Once we had our daughter, we took turns working and caring for her to avoid paying for childcare, which cost $25 an hour — more than I was making at the time.

When our Californian friends bought a 2,000-square-foot house in Detroit in early 2017, we began considering moving

In a moment of boredom or anxiety, we would scroll Zillow, looking at houses in Illinois and Michigan. It was our new Facebook or Instagram equivalent. A cursory search for jobs in our fields dampened any daydreams. But it was becoming harder to deny that there was a higher quality of life in the Midwest.

We also found it hard to build a community in LA. We would grow close to people, only for them to move a year later. The question “What are we doing here?” posed itself daily.

Meanwhile, my work became increasingly remote, and my husband’s gigs required him to travel outside LA often.

When we secured a gig in 2019 for a mini-documentary series in the Midwest, we decided to check out Detroit. We were almost fans. Our gig in the Midwest was going to support us for only six months, but we were ready to move.

Because we didn’t have savings, we decided to rent in Royal Oak, a young and trendy town 15 minutes outside Detroit. We rented a 1,700-square-foot three-bedroom home for $1,900 a month within walking distance of coffee shops and restaurants, the library, a farmers market, and heavily wooded playgrounds for our daughter.

I was able to work remotely, and my husband maintained his freelance work while taking on a job as a senior video producer for a nonprofit.

In LA, we covered our monthly expenses with only a few hundred dollars to save. In Royal Oak, we could pay our rent and student loans and get groceries with about $4,000 to put aside into our savings.

I could work at a coworking space for working mothers with childcare for $13 an hour. In LA, similar spaces cost about $20 to $25 an hour.

Because of this, I saved an extra $10,000 compared with previous years managing without childcare. We could afford the “forest school” we wanted to send our daughter to in Michigan, whereas in LA we’d wondered if preschool would be an option at all.

After 2 years in Michigan, we’d saved enough for a down payment on our first home

That summer, we bought an additional vehicle; we’d sold my car in LA to save money. We bought a Kia sedan to accommodate our growing family.

We loved the energy of Detroit—it never felt like a compromise. There was plenty to discover, and we could do so without the crippling anxiety of having to crunch numbers at every grocery visit, sweat over bills, or secure the next month’s gigs.

Life just became easier — and ease, we discovered as parents, which was incredibly valuable to us.