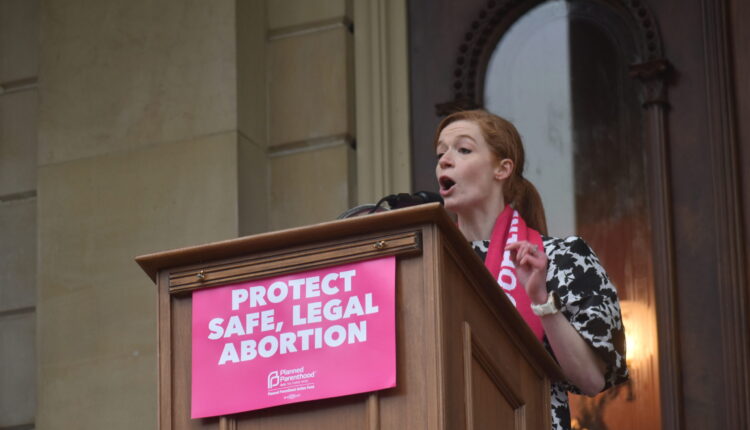 ‘I might be dead right now’ without Roe v. Wade ⋆

When the U.S. Supreme Court overturned Roe v. Wade and ended access to safe, legal abortions in many places across the country last month, state Sen. Mallory McMorrow (D-Royal Oak) had this thought: If she hadn’t gotten the reproductive health care she needed six months ago, she wouldn’t be alive today.

Eight weeks after McMorrow gave birth to her first child last year, she elected to get an IUD. But over the next few months, she felt pain to the left of her uterus. After getting a number of ultrasounds and X-rays, a Beaumont hospital doctor found the IUD had punctured through and was outside of her uterus.

The procedure she needed to remove the displaced IUD was a dilation and curettage (D&C) procedure — a type of abortion, commonly used to remove pregnancy tissue after a miscarriage.

“Mine was not what you would traditionally think of as an abortion, but when I read the draft Dobbs opinion and really sat in the full ramifications of what’s going to happen, I felt like it was really important [to share],” McMorrow told the Advance on Thursday. “I think anti-abortion activists and Republicans have really crafted this narrative for the past few decades that is really irresponsible and doesn’t grapple with the reality of it. My situation was very different, but a D&C is still an abortion procedure.”

If she hadn’t had the D&C procedure in January, McMorrow said she could have had permanent damage in her reproductive system, making her unable to get pregnant again, or it could have gotten infected and resulted in death.

McMorrow briefly spoke about her experience and shared her concerns about a post-Roe country during a Wednesday U.S. congressional hearing, where she was invited to testify on the impacts of criminalizing pregnant people and their providers for performing abortions.

The first-term Democrat made national news in April after a floor speech she made in the Michigan Senate went viral. During her speech, which was viewed millions of times and garnered the support of national leaders like President Joe Biden, McMorrow denounced her colleague, Sen. Lana Theis (R-Brighton), for sending a fundraising email baselessly accusing McMorrow and Democrats of “grooming” and “sexualizing” children because of their support for LGBTQ+ rights.

Abortion is still legal in Michigan, due to a preliminary injunction that blocks the state’s 1931 abortion ban.

However, that doesn’t mean county prosecutors, Republican lawmakers and anti-abortion activists in the state aren’t trying to change that and ensure the ban is enforced.

Republican lawmakers in the Legislature filed a request in an appellate court last week asking for the Court of Claims’ injunction on the state’s 1931 abortion ban law to be lifted.

Two prosecutors in Kent and Jackson counties have said they would enforce the 1931 ban, despite the injunction.

And the National Right to Life Committee (NRLC), a far-right, anti-abortion group, has drafted legislation to propose to state legislatures that would ban the spread of information online that “encourages” abortions, which could limit what information news media, experts and doctors are allowed to share about abortion care.

Many experts are concerned that a post-Roe world will impact how medical students are taught about reproductive health.

Mine was not what you would traditionally think of as an abortion, but when I read the draft Dobbs opinion and really sat in the full ramifications of what’s going to happen, I felt like it was really important (to share).

Outgoing University of Michigan President Mary Sue Coleman said she is “deeply concerned about how prohibiting abortion would affect U-M’s medical teaching, our research and our service to communities in need.”

“If we don’t have trained physicians who know how to perform abortion procedures because they’re not allowed to learn them, I might be dead right now,” McMorrow said.

She recalled sitting in the doctor’s office and discussing the medical options to remove the IUD, and the thought crossed her mind: “What if they weren’t even allowed to talk to me about this? Would I be forced into a less-than-ideal surgery or medical procedure for arbitrary reasons?”

Her situation isn’t the abortion experience that usually comes to mind during political debates, but it’s not uncommon and poses a serious medical threat.

“Anti-abortion activists want to paint this into something very narrow, like somehow the woman is irresponsible, and she has gotten pregnant, and it’s her fault, and this is terminating a life. But abortion is used for a lot of reasons,” McMorrow said. “And the impact of these laws is that many people, myself included, somebody who already had a kid and was trying to use contraception to not get pregnant again right away, needed to have an abortion procedure.”