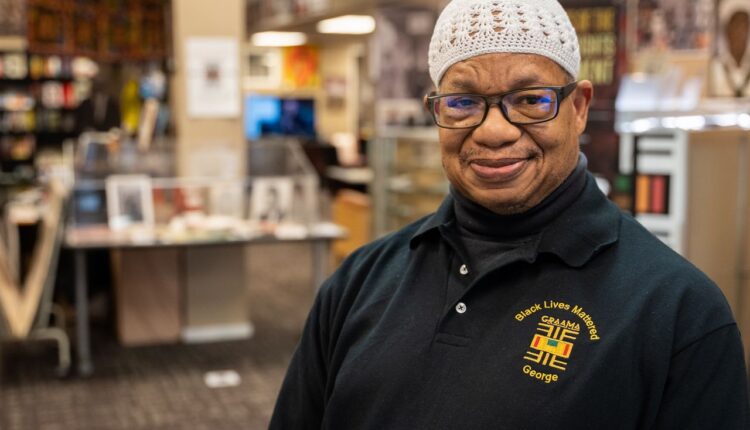 He tells these stories through the thousands of items he exhibits at the museum, from books, albums, and pins to magazine articles and more, highlighting the lives and achievements of prominent African Americans from West Michigan and beyond.

There are familiar faces like Dr. Martin Luther King Jr., Malcolm X and former President Barack Obama. But there are also exhibits that highlight the stories of local African American men and women and their pursuit of equality.

This story includes the stories of the likes of William J. Hardy, who was elected manager of Gaines Township, a suburb of Grand Rapids, in 1872. The success made him the first African American to be elected to public office in Michigan.

There is also Hardy’s son Eugene.

Information in the local history collection at the Grand Rapids Public Library indicates that he was the first African American student in Michigan to graduate from high school.

The museum also features Cleo Cross, who was in the spotlight as a student at Grand Rapids South High School in the 1960s after he and other black students refused to shave their mustaches under a care code that was more strictly enforced for students of color said Bayard.

The facial hair ban was eventually lifted and Cross returned to school.

Bayard is passionate about sharing these stories.

He says it is rewarding for guests to tell him they have learned something new, be it a “painful” lesson about the difficulties faced by African Americans or an “uplifting” story about black men and women overcoming obstacles and opposing themselves Fend off oppression.

“It makes you know that you are in the right place and are doing the right thing,” said Bayard.

In December 2015, he officially opened Museum 87 Monroe Center St. NW in downtown Grand Rapids. Before opening the museum, he had operated art galleries specializing in African American art for the past 30 years. He has also collected oral stories from elderly African Americans in Grand Rapids and West Michigan.

The museum is open Tuesday through Saturday from 12pm to 5pm, according to its website. Entry is free and public.

While the museum is in a small shop measuring only about 2,000 square feet, Bayard has filled the space with more than 2,000 items, including paintings, books, pins, buttons, photographs, notes, brochures, newspapers, and more.

The displays are not limited to items from the civil rights era.

One exhibit includes signs posted during protests in Grand Rapids last spring and summer in response to the deaths of George Floyd and Breonna Taylor. The display contains signs with statements such as “I can’t breathe” and “Black lives matter”.

“We collected them from people who wanted to throw them away,” said Bayard. “We said ‘no, no, no. We will collect them because we want to tell this story to people in the future. ‘“

He said it was important that these and other stories be preserved.

The Catholic priest told the probation authority that his sexual misconduct towards teenagers was “shameful, inappropriate”.

In Kalamazoo County, the COVID-19 vaccine has reached nearly 19% of eligible vaccines