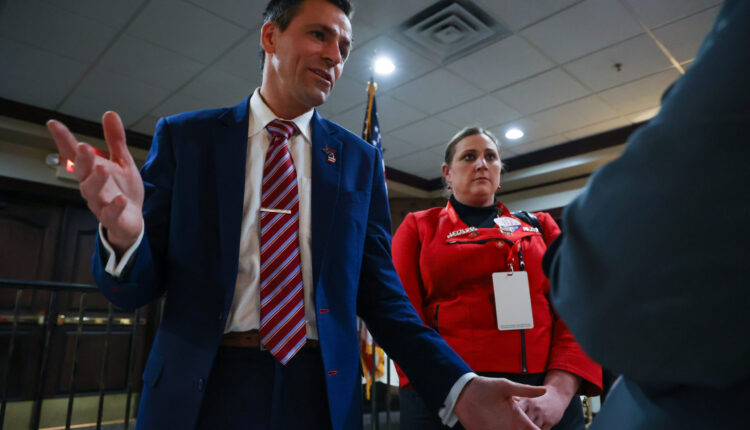 Michigan Republican gubernatorial candidate Ryan Kelley was arrested by the FBI Thursday morning at his home in Allendale Township in West Michigan.

FBI spokesperson Mara Schneider told that she could only confirm FBI agents from the Grand Rapids office executed an arrest and search warrant at Kelley’s residence and that he was taken into custody at about 9:30 a.m.

“At this time, I cannot provide any information on the nature of the charges against Mr. Kelley, although I expect additional information to be forthcoming,” said Schneider.

Kelley traveled to Washington, D.C., for the Jan. 6, 2021, protests that preceded the attack on the U.S. Capitol.

He was later identified in video footage showing a man climbing the step to the Capitol building while shouting “Come on, let’s go! This is it! This is — this is war, baby!”

Kelley has claimed he never actually entered the building.

Kelley has been a controversial figure even before he was eyeing the state’s top executive position. He was called to step down from his position on the Allendale planning commission over his relationship with one of the men charged for the alleged plot to kidnap and kill Democratic Gov. Gretchen Whitmer and his protests defending a Civil War statue in Allendale.

He also attended a rally calling for a so-called “forensic audit” of the 2020 presidential election at the state Capitol and told a crowd of supporters in February that if election workers see something they “don’t like happening with the machine,” they should “unplug it from the wall.”

Kelley’s arrest adds yet another complication to the GOP race for Michigan governor. Kelley was among just five Republican GOP hopefuls left on the Aug. 2 ballot after five others were tossed off due to a fraudulent petition signature scandal.

“Just days after their field was cut in half due to corruption and mass fraud, Republican gubernatorial candidates’ callous disregard for the principles of democracy was on full display again today as Ryan Kelley was taken into custody by the FBI following his participation in the January 6th insurrection,” said Barnes. “Tudor Dixon, Garrett Soldano, Kevin Rinke, and Ralph Rebandt have equally shouldered the same baseless lies about 2020 that spurred Ryan Kelley to storm the capital in search of war. Michiganders won’t forget the role they played in dismantling public trust in democracy.”

The winner of the GOP primary will be up against Whitmer on Nov. 8.