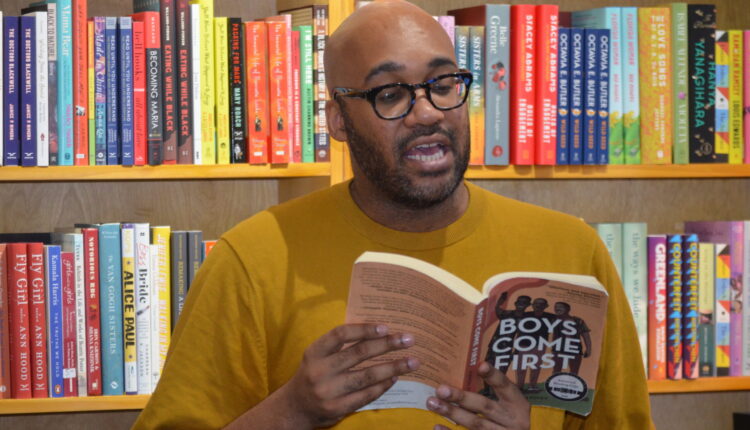 Author and journalist Aaron Foley on Saturday said at a Banned Book Week event that the publishing industry too often ignores the Black queer community in America.

“When it comes to writing about queer things and queer books, the industry will push a couple of white authors and say, ‘Well, here’s all your gay books.’ You don’t hear often from people of color,” Foley, a Michigan native who is Black and queer, said during an appearance in Detroit at Source Booksellers, an African-American owned bookstore.

Foley, a Michigan State University graduate who has worked for several Michigan news outlets, was promoting his latest book, “Boys Come First.” His first novel follows three Black, gay millennial men and their search for love within Detroit at a time when it’s undergoing gentrification in several neighborhoods.

Foley is the founding director of the Black Media Initiative at the Center for Community Media at the Newmark Graduate School of Journalism at the City University of New York. Previously, he was a John S. Knight Journalism Fellow at Stanford University, “chief storyteller” for the city of Detroit during the Mike Duggan administration, a position designed “to tell the stories of real Detroiters citywide,” according to Foley’s website. He also previously served as editor of BLAC Detroit Magazine, an arts and culture magazine.

The event lifted up Banned Book Week, which annually spotlights current and historical attempts to censor books in libraries and schools.

Foley pushed back against the growing right-wing movement banning books at schools and public libraries. He noted that Black authors — whether they are straight or LGBTQ+ — are among the writers who have been targeted.

“It makes me upset and emotional when I see artists of color targeted,” said Foley. “It’s hard enough for people of color to be published. …That’s very disheartening.”

For example, Nobel Literature Prize-winner Toni Morrison’s novels, “The Bluest Eye” and “Beloved,” have been banned in several school districts and public libraries across the country. Morrison, who was African American, died in 2019. Her books dealt largely with Black life in the U.S., and includes issues like slavery and interpersonal relationships.

“The Bluest Eye” also addresses sexual assault. In 2016, after a white parent in the Northville school district opposed the use of the book at a high school there, school board members unanimously approved a committee recommendation that allowed parents to choose between the Morrison novel or two other works. A similar issue and resolution centered on “The Bluest Eye” occurred in the Chelsea school district in 2019.

Foley said in his experience, if someone “says something is bad” others will seek it out, try to find out why, and judge for themselves.

“I think a lot of people are thinking that way,” said Foley. Foley’s Detroit appearance was moderated by Amber Ogden, Detroit chapter leader of PEN America, an organization that advocates for the protection of free speech.

During the event, William Johnson, PEN America program director, was asked why he thinks books by African-American authors are being banned in addition to those written by white authors.

“A lot of people who are doing this are white Christian nationalists,” said Johnson, who is African American. “They believe that is their culture and their world.”

The fight over banning books has become part of the 2022 midterm election.

Foley’s event was held the same week that Michigan GOP gubernatorial nominee Tudor Dixon announced during a press conference outside the Michigan Department of Education in Lansing that she would consider banning “pornographic” books in K-12 schools if she were elected governor and also called on State Superintendent Michael Rice to resign, as the Advance previously reported. A recent report from PEN America found that from July 2021 to June 2022 there were 2,532 instances of individual books being banned, affecting 1,648 unique book titles in 138 school districts in 32 states.

Michigan, which ranked sixth in the nation for most books bans, had 41 book bans in four districts in the first nine months of the 2021-22 school year.

Johnson said that PEN America will fight back against censorship and encouraged students to be part of the effort.