FHLBank Indianapolis, which is part of the Federal Home Loan Bank System, has provided funding to affordable housing in the form of grants through AHP since 1990. The bank is a regional cooperative, which means it is owned by its member banks, credit unions, and other financial institutions in Indiana and Michigan. Each year, these organizations apply for, and many receive, AHP funding to help finance the building of their affordable housing developments.

In Detroit, however, an AHP grant hadn’t been secured since 2014.

FHLBank Indianapolis began a concerted effort in 2019 to focus on developing partnerships and building awareness of the programs the bank offers in Detroit, the largest metropolitan area in its district.

These local grants were part of an $11.2 million pool of funds that FHLBank Indianapolis distributed to 24 different affordable housing projects in Michigan and Indiana to support the acquisition, construction, or rehabilitation of properties for use as affordable homes.

Included in the grant-funded projects in Detroit are:

This empty lot will soon house the La Joya Gardens, a mixed use development that will add to the affordable housing stock in Detroit.
Photo by Nick HagenFuture developments bring opportunity, investments

Nat Zorach, who lives a few blocks away from the La Joya development, says the vacant lot, which will soon be the new home for La Joya Gardens, was “muddy and covered in trash”.

“A vacant lot being turned into housing is a win for everybody,” he says.

Zorach, who works on energy efficiency programs for a public utility company, says he would like to see even more investment of this type in his Hubbard Farm neighborhood.  He and his partner bought a home there in 2018.

About 25 percent of the residents in Hubbard Farms are Black and 53 percent are Hispanic or Latino, according to Martha Potere, who lives in the neighborhood and works for the city of Detroit.

She says the La Joya development is important because it increases the population density.

“The more folks we have living here, the more cohesive of a community we can have.  Diversity in the socioeconomic background of folks living here is needed too,” Potere says.  “I don’t want to see market-rate or higher-cost apartments because it doesn’t match the demographic here.  It’s nice to have spaces for people with all different incomes.”

Ultimately, she says, having access to affordable housing will put people on a path to start building generational wealth.

Zorach says the partnerships that are being formed to provide affordable housing are giving people opportunities they might not have otherwise had.

“There’s not enough housing in southwest Detroit because of a constriction of supply, there’s more demand coming down from areas like Corktown,” says Omari Boone, assistant General Counsel and Vice President of Enterprise Risk Management with Lake Trust Credit Union.

“We are very concerned with keeping southwest Detroit residents here.  They’ve been through some tough times and we want them to be here for the good times.  There needs to be more housing stock for people to occupy.  If not, rents will continue to increase and people won’t be able to afford to live here.”

While foundations being poured and framework going up are the most visible signs of the ongoing development of the four projects, putting together the funding and the partnerships is the real work that most people never see.

Shires, a former Manager of Housing Development with the City of Detroit, joined FHLBank Indianapolis in 2020 to help ensure the bank was connected and engaged with financial institutions, developers, and community groups active in the Detroit affordable housing space.

“It takes a significant amount of collaboration and coordination to bring together the funds for most affordable housing projects,” Shires, says. “Often, our AHP grants are the last piece of the financing puzzle that can help a project move from being a ‘what-if’ project to a real, tangible development.”

For the Marwood Apartments, the total project cost is $18.3 million, and FHLBank Indianapolis’ AHP grant of $500,000 is just one piece of the funding puzzle. 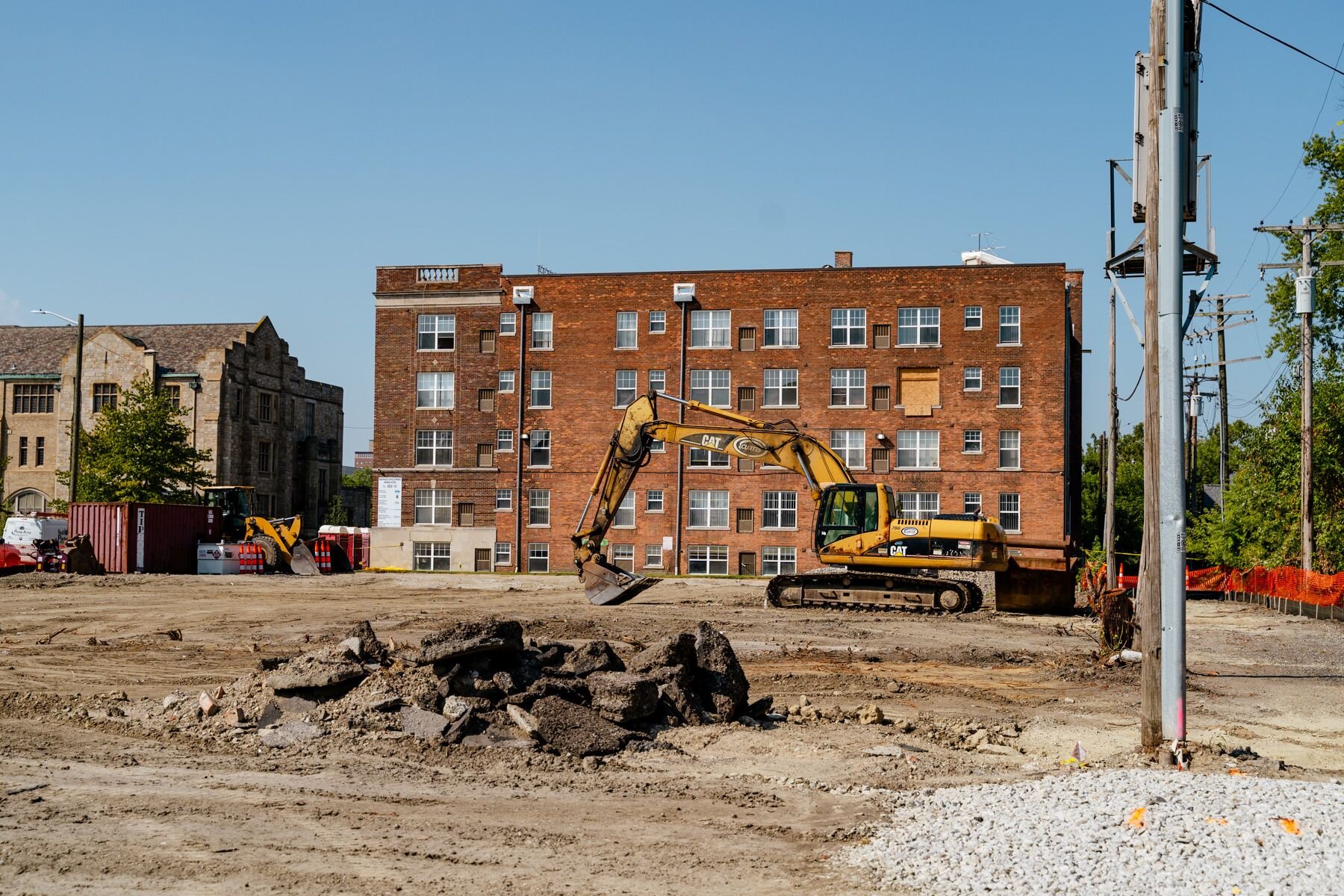 Construction is underway at the Marwood Apartments which will provide opportunities for future residents to live in safe, quality, affordable housing.
Photo by Nick Hagen
Sonya Mays, CEO of Develop Detroit, says that in addition to the FHLBank Indianapolis AHP grant, financing for the Marwood Apartments project includes a combination of Low-Income Housing Tax Credits, as well as HOME funds and Community Development Block Grants issued by the City of Detroit through the federal Housing and Urban Development Department.

“Because of all of the consolidation, it’s becoming more challenging to find financial partners in the FHLBank Indianapolis [membership] that are interested in Detroit,” Mays says.  “Lake Trust Credit Union was willing to let us access that grant program and they understand the overall commitment communities need to have for affordable housing.”

With financing of the project sorted out, Develop Detroit will renovate the historic apartments with some new construction. The end result of the project will be a 71-unit mixed-income apartment community that will include 10 efficiency, 44 one-bedroom, and five two-bedroom apartments, along with six new-construction two-bedroom townhouses.

“If you can’t pull together the dollars to get it off the ground, it’s not going to happen,” Ed Potas Development Manager for Cinnaire Solutions, a nonprofit developer says. “Traditional funding only gets you 80 percent there.  You’ve got to get that last piece of the puzzle together. It’s making the numbers work.”

For many projects, this AHP funding allows them to fill in a development gap that can otherwise be a major roadblock.

FHLBank Indianapolis currently contributes 10 percent of its earnings each year to support affordable housing. Sixty-five percent of those dollars fund AHP, which awards grants of up to $500,000, and the remaining 35 percent is designated for a homeownership grant program that supports the entire cycle of homeownership for low-income families.

Mike Recker, AHP Portfolio Manager at FHLBank Indianapolis, says that there are many restrictions to using funds awarded through the AHP, which can be limiting. For example, AHP funds can be used only to cover costs associated with the construction or rehab of affordable housing. For projects that include supportive services such as financial literacy classes for tenants, the project sponsors have to find funding elsewhere.

Each year, projects submit applications, which are scored by FHLBank Indianapolis. Those that score highest are awarded grants until the funds are exhausted. Those that are awarded are then able to account for the AHP funding to complete the financial portion of their affordable housing development.

“FHLBank Indianapolis’ AHP grant is a key flexible gap funding source that can really help,” Recker says.  “It’s often the last piece of the puzzle to get that deal done.  It has a positive impact on the communities it goes into in Michigan and Indiana.  Our funding helps build the housing that many times is followed by other supportive services and job creation.”

Pulling together the financing is the biggest challenge, Potas says. Potas and Cinnaire Solutions are co-developing La Joya Gardens with the Southwest Detroit Business Association and is a co-developer on the Mariner’s Inn project.

Flagstar Bank has been a longtime partner of Cinnaire as an investor in low-income housing tax credits.

Recker says some of the developers, like Cinnaire, already have established relationships with FHLBank members.  For those that don’t, connections are made by Recker and his team, and by Shires in Detroit.

A special focus on Detroit

In trying to expand the impact of FHLBank Indianapolis in Detroit and the state of Michigan, Shires says she is working to identify developers with projects in need of subsidies and connecting them to member financial institutions who have an interest in a particular project being developed.

“It’s understanding which members might be interested in the Detroit market that may not have an affordable housing presence there yet,” she says.  “Identifying these members has helped us pull together a pool of potential funders in Detroit.”

Many FHLBank Indianapolis member financial institutions are interested in working in the community development and affordable housing space in Detroit, and Shires is helping to facilitate those connections.

“We are helping to expand who’s here and leveraging these dollars through partnerships,” Shires says.  “We have community banks that are interested in expanding from the west side of the state to the east side, we have credit union members that are incredibly mission-driven and want to enter into the affordable housing space, and we have larger banks that are experienced in affordable housing that want to do this work in Detroit.”

One such connection was made with Lake Trust Credit Union, who had been in discussions with FHLBank Indianapolis about affordable housing opportunities. Omari Boone, assistant General Counsel and Vice President of Enterprise Risk Management with Lake Trust worked with Shires to facilitate the sponsorship.

“They (FHLBank Indianapolis) told us that they had a sponsor opportunity that would be a good fit for us and Develop Detroit already had a lot of other partnerships with the bank,” Boone says. “We were confident after meeting with them that we could support Develop Detroit in a financial support role.”

Boone says the Lake Trust has a branch in the North End neighborhood where the Marwood project is located.  He says credit unions are built for these kinds of partnerships.

“We’re mutually owned and we’re a nonprofit that’s designed to make this kind of impact in a community that’s stepping into a new area that’s not our bread and butter,” Boone says.  “We are focused on providing financial services at a good price, and we care for the well-being of our members.  We’re taking a new approach to the concern for our members and community as a whole.  Getting into the affordable housing area is a natural fit for that process.  We want to step out of our traditional shoes of providing checking and saving accounts.

“From our perspective this is one of the most impactful areas we can participate in, being able to provide homes for people in neighborhoods where they can enjoy one of the core facets of personal well-being.  We’re seeing changes in the industry, and we want to make sure investment and change doesn’t leave residents behind.”

As the impacts of the 2020 round of AHP are starting to be seen in Detroit, what’s next for the bank’s program?

“Our team is currently working on scoring applications for the 2021 AHP round,” Shires says. “When that’s announced in November, we hope to see more grants coming to Detroit in support of building up our communities.  The four affordable housing projects we are highlighting today signify our ongoing commitment to residents of Detroit to provide them with access to safe, affordable, quality housing that will give them opportunities to build generational wealth.”

This is part of the Block by Block series supported by FHLBank Indianapolis that follows minority-driven development in Detroit.

What’s on Ann Arbor’s November 2nd poll? A guide for voters to the 2021 election

Detroit could change rules on monitoring lead in rental properties

What to Do This Weekend: Detroit Fall Beer Pageant, Paradise Natural Foods Dinner