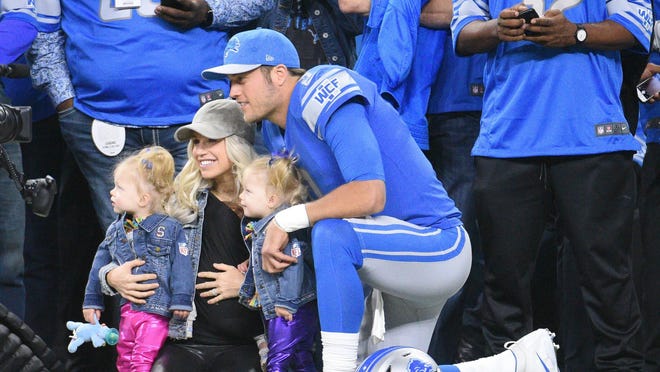 Stafford, the longtime Detroit Lions quarterback, will be the NFL’s spokesman for a Motown staple: Little Caesars. The Detroit-based pizza chain entered a sponsorship agreement with the league earlier this summer, according to a Monday news release by Little Caesars.

The sponsorship also includes a sweepstakes for fans and charitable efforts to address food insecurity in some NFL cities, starting with a serving of food Sept. 7 in Los Angeles.

RELATED: How Dan Campbell empowers Lions players and coaches one haircut at a time

But Lions fans might be watching the ad spots, which run all season long in conjunction with an effort to sell more Hot-N-Ready pizzas ahead of NFL Sundays, to see if Stafford drops any more low-key references to his former home. Following Stafford and the Los Angeles Rams’ Super Bowl win this year, AT&T commericals featured Stafford referencing a “life-changing” career move. Stafford, of course, was traded after the 2020 season — per his request — from a losing Lions team facing a rebuild to a Rams roster budding with Pro Bowl talent.

Stafford realized the potential that inspired the Lions to draft him No. 1 overall in 2009 with some clutch throws (as well as some requisite Stafford turnovers) in the Rams’ 2021 playoff run. He threw for 283 yards with three touchdowns and two interceptions in the Super Bowl win over the Cincinnati Bengals, finishing up with a dramatic drive for the winning score in the final minutes.

“We are really excited to work with Matthew Stafford for our debut as the Official Pizza Sponsor of the NFL,” Greg Hamilton, senior vice president of marketing at Little Caesars, said in the release. “As a leader in the pizza business, it made perfect sense for Little Caesars to partner with a leader on the field — the most recent Super Bowl champion quarterback.”

“When fans order their favorite Little Caesars items before any NFL game begins this season, they will be entered for a chance to win a variety of football-related prizes and pizza-related perks, including tickets to Super Bowl LVII,” the release states . “The Pizza!Pizza! Pregame promotion begins on the first NFL regular season game day on September 8, with more details to be announced through Little Caesars social media channels and on LittleCaesars.com.”

That Thursday night game will feature Stafford and the Rams hosting the Buffalo Bills on NBC. The Lions, meanwhile, led by former Rams QB Jared Goff, will open the season Sept. 11 at home vs. the Philadelphia Eagles.

Tyler Davis can be reached at [email protected] or on Twitter at @tdavisfreep.