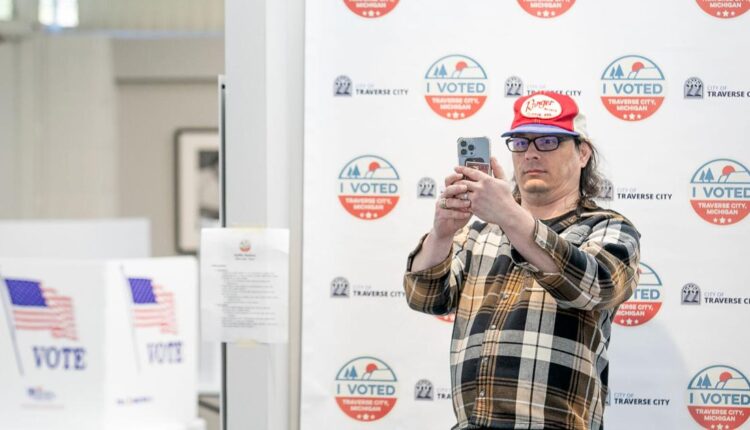 Election Day: “It’s like a party out here” | News

TRAVERSE CITY — For local voter Shannon Hall, voting in person is “so much fun.”

“It’s like a party out here,” she said after casting her ballot.

All eight local polling centers opened at 7 am and will remain open until 8 pm on Nov 8.

At Precinct 3, Chair Susan Fisher said more than 200 voters have come through to cast their ballots as of 10:45 am She said when they first opened, there was already a line of people waiting outside.

“There’s a lot more mail-in ballots happening, so we kind of, election-to-election don’t really know what we’ll see in person,” Fisher said. “Or, what we’ll see with absentee ballots.”

A few blocks away at the Traverse City Fire Department Fire Station No. 1, Precinct 1 Chair Valarie Handy said they just received their 288th vote at approximately 11 am

Handy said there hadn’t been any “scuffles” or problems at her polling location, but said that a Traverse City Police Department officer would be rotating throughout the different polling locations all day.

Officials from TCPD and the Grand Traverse County Sheriff’s Office said they did not receive any threats before election day, and will be assisting polling locations if needed.

Three days ago, on Nov. 5, someone left homemade tire spikes all over the parking spaces in front of the Charlevoix County Republican Headquarters, according to their Chairman John Jarema.

“This is not how Americans fight over the issues,” Jarema said in a statement. “We debate. We vote. We do not physically attack others when we disagree.”

The Boyne City Police Department responded to the scene and said the case is still under investigation, with an anonymous donor offering a $2,000 reward for information leading to an arrest and conviction in this case.

In addition to watching out for physical threats of violence, both precinct chairs said they have had poll challengers and poll watchers stop by this morning.

At Precinct 3, Fisher said they had two poll challengers. A poll challenger is a “Credentialed, partisan observers representing parties or other organizations,” according to previous Record-Eagle reporting.

This year, County Clerk Bonnie Scheele said five different poll challenger groups were registered for election day — the most she has ever seen.

Susan LeMoine, a poll challenger affiliated with the Democratic Party, said she chose to volunteer as a first-time challenger because she feels like democracy is at stake this election season.

“We are here to make sure that everyone can vote and that their vote will be counted,” she said. “I think that comes under the rubric of just good citizenship.”

LeMoine said so far, from her perspective everything has gone smoothly at Precinct 3 and that she has not had to exercise her rights as a poll challenger yet.

Fisher said a poll watcher can be anybody who stays behind after casting their ballot to see how the process works. She said at her precinct, she’s had a couple people do that already.

“They’re part of the process, so we’re happy to have them,” she said. “They’re just here observing and seeing what we do, and we learn from each other.”