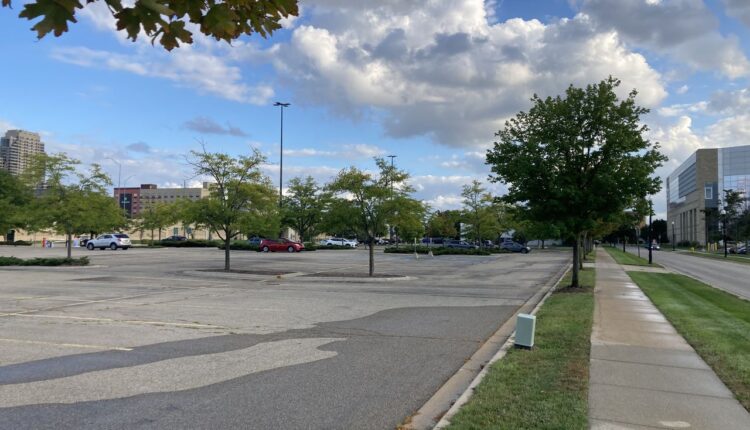 Grand Action 2.0 said in a statement that architectural firm Progressive AE submitted in late August materials related to the development of the soccer stadium to the city of Grand Rapids for a “preliminary and informal review.” The property under consideration includes several city-owned parking lots near Pearl Street NW and Mount Vernon Ave. NW.

“While the stadium site has not been confirmed and plans for this facility are still in the very early stages, this review is an important step in the due diligence process to determine if this site would even be viable,” according to Grand Action.

The potential location of the proposed stadium was first reported by MiBiz.

A statement provided on behalf of Grand Action by public relations firm Truscott Rossman said Grand Action’s vision of bringing professional soccer to Grand Rapids depends on its ability to identify and conduct due diligence on a site, acquire the necessary property and secure funding.

“None of those critical factors have been completed at this time,” according to the statement.

The property under consideration includes several city-owned parking lots near Pearl Street NW and Mt. Vernon Ave. NW. Those lots are used for parking for residents who use the city’s free Downtown Area Shuttle.

A rendering of the stadium shows it would also be built on what’s now a parking lot for the David D. Hunting YMCA, a portion of which is owned by the Grand Rapids Downtown Development Authority.

Tim Kelly, president and CEO of Downtown Grand Rapids Inc., which oversees the DDA, was not available for an interview Tuesday.

“DGRI has been involved in very preliminary discussions regarding a potential soccer stadium, and planning is in the very early stages,” according to a statement provided by DGRI’s spokesperson, Bill Kirk. “There is much yet to be determined, and previous planning work will continue to be incorporated in all discussions.”

Another parcel in the stadium’s footprint is 407 Pearl St. NW, which is now home to a Big Boy restaurant. Records show the property was purchased in late July for $3.2 million by 407 Pearl LLC. The LLC shares the same address as DP Fox Ventures, a sports, entertainment and automotive sales company whose chairman and CEO is Daniel DeVos.

City of Grand Rapids spokesperson David Green said materials related to the potential soccer stadium site were provided to the city during the week of Aug. 22.

“We offer this process for projects to ensure that information about city codes and regulations are incorporated into projects in the early conceptual phases,” he said. “A facility of this nature would eventually require approval by the city’s Planning Commission in a process that allows for public engagement and feedback.”

Green declined to provide additional information about the materials submitted to the city related to the potential soccer stadium.

Talk has swirled for years about bringing professional soccer to Grand Rapids.

Grand Action disbanded in 2017 but relaunched in March 2020 as Grand Action 2.0. In February of last year, the group said the concept of a downtown soccer stadium remained on the table.

Jim Zwiers, a member of Grand Action’s executive committee and vice president of Wolverine World Wide, told MLive in March of last year that plans were in motion to develop an ownership group to bring a United Soccer League Championship-level team to Grand Rapids.

Once that work was done, the focus would shift to finding a site to build a roughly 7,500-seat stadium, and how to pay for it, he said at the time. He estimated the stadium would cost at least $40 million.

On Tuesday, Amy LeFebre of Truscott Rossman, speaking on behalf of Grand Action, said she did not have any information to share on efforts to create an ownership group for a professional Grand Rapids soccer team.

“Grand Action 2.0 is not in discussions with any league about bringing a professional soccer team to Grand Rapids,” she said by email. “Our focus is on getting a stadium built.”

She said it was too early to talk about the size and cost of the potential stage.

Grand Rapids Mayor Rosalynn Bliss declined to comment but said in a text message that she was “excited about a project of this scale and the vibrancy it could add to our city and region.”

Did You See Where The Newest Spirit Of Halloween Is In Lansing?