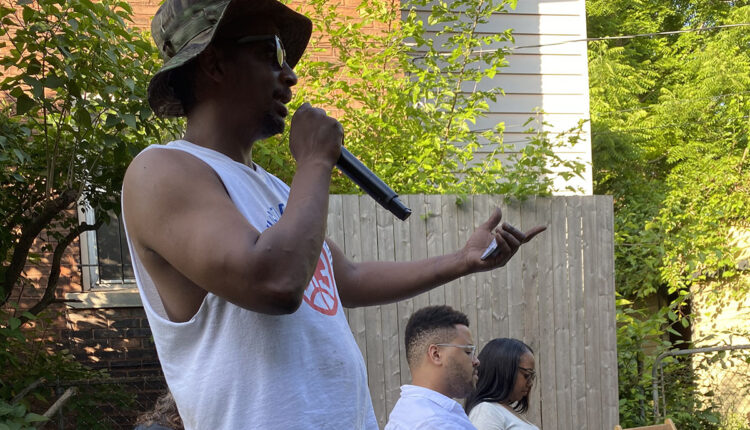 When his children were young, retired school teacher Mark Anthony struggled to figure out where to send them for an education.

The options were limited, said Anthony, who was faced with the choice of driving them to a school far from his neighborhood in District 5 or opting for a private school – also a distance away – that he really couldn’t afford.

“At the time, I had to enroll my daughter in Focus Hope because that was the only option actually afforded to a Black male father,” Anthony recounted. “I didn’t get much help from any other community resource partners.”

Anthony joined about a dozen of his neighbors Tuesday in the courtyard of the Mama Akua Community House on Ferry Park to discuss housing and schooling conditions in the district, city services and spending priorities for Detroit’s $826 million in federal COVID-19 aid. The topics were raised as part of a town hall hosted by BridgeDetroit and Detroit is Different to gather resident feedback about the most pressing issues in their community.

District 5 residents said that there’s just one elementary school in the neighborhood near Grand River and Linwood. Anthony, who now works for the City of Detroit’s General Services Department, said the lack of centralized schooling options “can ruin a community.”

“We know that a community can’t heal without its education, without safety, without knowledge and information,” he said. “So that’s one of the barriers that we’re constantly having.”

Kay Thompkins, a 30-year resident of District 5, spoke on June 14, 2022, of the struggles in her community with arson, few schools and the need for home repair during a town hall hosted by BridgeDetroit and Detroit is Different. (Photo by Detroit is Different)

Kay Thompkins, a 30-year resident, echoed Anthony’s concerns. She noted she’s seen children leave for school from the neighborhood and embark on a 20-minute walk to Thirkell Elementary School on 14th Street because there aren’t any closer options.

Yusef “Bunchy” Shakur, who runs the community house, added that his neighborhood’s only middle school was turned into a police academy.

“Now some people would say that’s not a bad thing,” he said, “but nobody ever came to ask us (residents) about it.”

District 5 stretches from the Dexter-Linwood neighborhood on the northwest side to some of the city’s downtown, and toward the east side by Belle Isle. The district has nearly 110,000 residents and it is primarily renter-occupied, with about 47% renters compared to 21% owner occupied properties, according to Data Driven Detroit.

Yusef Bunchy Shakur, a longtime District 5 resident, talked about the absence of schools and development that has engaged residents in his community during a town hall hosted by BridgeDetroit and Detroit is Different on June 14, 2022. (Photo by Detroit is Different)

Despite the district’s affluent pockets in Detroit’s downtown, Woodbridge and Indian Village neighborhoods, about 39% of people in District 5 are living below the federal poverty line.

On top of the shortage of schools and recreation centers, Shakur said residents are defensive about new development in the area because they often feel that it’s done without their input.

“We’re not opposed to development,” he said. “We just oppose the development being imposed on us.”

Some projects, including the Herman Kiefer complex in the Virginia Park neighborhood and The Boulevard Detroit apartment building in Detroit’s New Center, have drawn criticism in recent years on claims they’ve been designed for people who aren’t from the city.

“I’m a good taxpayer, I’m a good citizen, I keep up my property pretty well,” Thompkins said, “but then developers start building this stuff around here and it just makes me ask ‘why are you trying to push me out?’”

Other conversations at the town hall centered on access to grants and other programs meant to help people in the city with home repairs.

Lamar Weir, a policy research associate with the Detroit Public Schools Community District, said a lot of the programs offered have income thresholds that continue to exclude many Detroiters.

“Maybe someone has a lot of family members to support and they can really use those programs, but they might be $100 over that threshold, and then that makes them ineligible for those services,” Weir said.

Anthony said even when the programs are well intentioned, the help doesn’t always make it to the residents.

Gracie Xavier, a resource provider for an area nonprofit, said it’s her job to help residents navigate the programs designed to help them. She agreed there’s “so many roadblocks” for homeowners to jump through that many don’t end up taking advantage.

“I’ve been trying to take advantage of this program myself, but it’s almost unattainable,” Xavier said. “I’m a person who helped residents navigate these systems, and I can’t even navigate all the loops and who you’re supposed to talk to, what you’re supposed to have, and all of those things.”

The solution, according to Xavier, is bringing in the people that the programs are meant to serve in on the front end to provide input on how they are designed, rather than after the fact.

Despite the challenges, residents said that they love where they live and plan to stay put.

“I’m still here, I love my community, I love my neighborhood, and I feel safe,” said Gena Jennings, noting a strong relationship with Detroit City Council President Mary Sheffield, who represents the district, and said it makes her optimistic about the future.

“As long as the neighborhood has good people who want to be engaged and good leaders who are engaged, things will get better for everyone,” Jennings said.

authored by
First published at https%3A%2F%2Fwww.bridgedetroit.com%2Fdistrict-5-residents-want-schools-object-to-imposed-development%2F