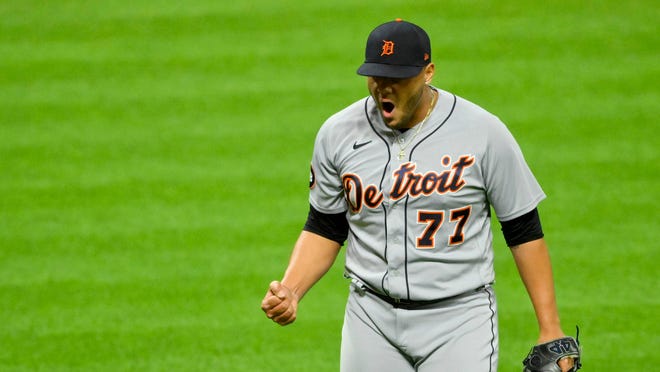 The ball sailed over the right field wall.

The Detroit Tigers lost, 4-1, to the Cleveland Guardians in Game 1 of Monday’s doubleheader and the first of four games in the series. The offense, worst in MLB, finished with three hits, two walks and 13 strikeouts. The Tigers (43-74) have dropped eight games in a row and carry a 7-27 record since July 9.

Detroit has struck out 91 times over the past seven games.

“I felt good today and made some big pitches,” right-handed starter Drew Hutchison said. “Maybe I could’ve made one more big pitch. But it’s a loss. Losing sucks, so there’s really not much to say other than that.”

The lack of offense continues to create problems, but the Tigers were in a position to win until a messy seventh inning. The Guardians put the first two runners on base with right-handed reliever Will Vest on the mound.

Hinch sent Chafin, a left-hander, into the game to face Jose Ramirez with one out and runners on the corners. Chafin struck out Ramirez on four pitches, finishing the four-time All-Star with a nasty swing-and-miss slider.

“The inning starts with the walk to (Myles) Straw,” Hinch said. “When (Vest) walks him, it changes that entire inning. … I wanted to turn around Jose Ramirez, which feels like, going into that at-bat, that’s the toughest assignment for Chafin with runners on first and third. But Andres Gimenez is a pretty good player.”

Gimenez stepped to the plate, and on the first pitch, the Guardians took a 4-1 advantage.

The Tigers’ offense remained lifeless in the eighth and ninth innings, as Guardians closer Emmanuel Clase — an All-Star who entered Monday with a 1.29 ERA and an American League-leading 26 saves — retired three straight to end the game.

Hutchison threw 67 of 101 pitches for strikes.

The Guardians didn’t score until the fifth inning, when Straw opened the frame with a single and stole second base with one out. A fourth-pitch slider to Ramirez hung over the heart of the plate, and with two outs, the slugger singled to right field.

It was enough to score Straw and tie the game, 1-1.

Hutchison allowed a leadoff double to Oscar Gonzalez in the sixth inning but struck out Owen Miller before righty reliever Will Vest replaced him. Vest retired the next two batters to keep the game tied entering the seventh.

“My slider was good today and my fastball command was better today,” Hutchison said. “I gave up some hits, but that’s what this team does. It was just the one walk. When you sprinkle those in with a team like this, that’s usually when you get in trouble, so I did a good job in that sense. “

The Tigers scored their lone run against Civale in the first inning, as Riley Greene drilled a leadoff single to center field on the first pitch of the game. Javier Báez put two runners in scoring position with a one-out double — his 24th double this season — on a first-pitch slider.

Harold Castro, the next batter, grounded out, scoring Greene for a 1-0 lead. Miguel Cabrera, with Báez standing on third base, struck out swinging on three pitches to squander a chance at more runs.

The 5 Most Iconic Oldsmobiles To Roll Out Of Lansing