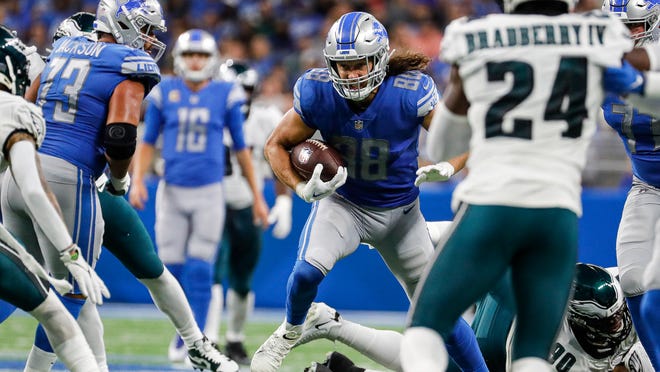 But he didn’t to see it — he was riding to the hospital with his aunt, sobbing, worried about what his future may look like.

On Sunday, nearly one year to the day, he had what at first glance seemed to be a very impressive day in his return to action for the Detroit Lions — primarily covering former Heisman Trophy winner Devonta Smith and holding him to zero catches on four targets .

He added 10 total tackles (seven solo), which was the second most on the team.

“It was a blessing to be back out there with my teammates,” Okudah said after the Lions’ 38-35 loss on Sunday. “Unfortunately we didn’t win but I know we had things we can build upon for last week.”

“I think I did pretty well but at the end of the day it’s all about the win … the win is what’s going to change the narrative about the Detroit Lions.”

Near the end of the first half though, Okudah was not on the field. During that series, the Eagles had their biggest play of the day. On third-and-4, Jalen Hurts found AJ Brown, who outran Will Harris — filling in for Okudah at cornerback — for a 54-yard gain.

Lions coach Dan Campbell said the team was trying to limit him in his first return to a full game of live action.

“We just got him back and he’s in a good place,” Campbell said. “We were just trying to — let’s monitor a little bit and not overdo it, but yet certainly get him his plays. We’re trying to work a couple of guys that way to be smart.”

SHAWN WINDSOR:These are not your ‘Same Old Lions.’ The home opener showed that.

Okudah had a different story in the locker room.

“I was just dealing with cramps,” Okudah said.

Hurts ran wild early and often against the Lions defense, racking up 90 yards on 17 carries. While Detroit was able to contain him in the second half, it wasn’t without a loss.

Midway through the third quarter, Hurts scrambled on third down and slid after getting the first down. But Lions defensive back Tracy Walker dove at him and hit him into the ground.

Several Eagles, particularly wide receiver Zach Pascal and tight end Dallas Goedert, took exception to the play and one shoved Walker, who responded by throwing a punch. That move resulted in his ejection.

“Now, I know Tracy got kicked out because of a second penalty,” Campbell said after the game. “Which is unacceptable and he knows that. That’s not OK. And that’s not what we’re looking for because that’s how you get beat and those guys know that.”

Walker was one of the Lions’ best defenders on Sunday, finishing with a game-high 11 tackles (eight solo), one sack and one pass defended.

After the game, Walker knew what he’d done.

“I just let my team down,” he said. “As a team captain, I’ve got to be better. I was hot-headed at the moment and I’ve just got to make better decisions at the end of the day.”