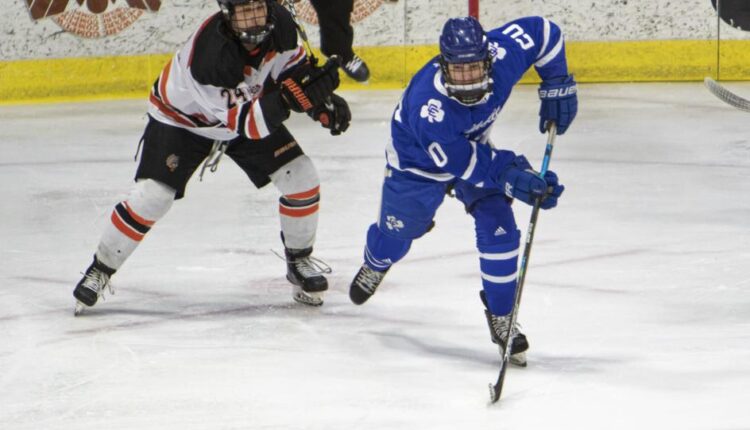 PLYMOUTH – Detroit Catholic Central Shamrocks won another match against the Brighton Bulldogs 3-0 in the Division 1 semifinals on Friday night.

“It feels good. It feels great, you know? We worked very hard and we got back to it right away,” said older striker Brett Beale.

The Bulldogs and Shamrocks seem to meet at the USA Hockey Arena almost every March, and the teams have split the last eight national titles, four each. So it was no surprise they met again in the late stages of the playoffs.

“It’s fun. We have a lot of respect for them and the program they have, and we always know that if the regional pairings and the semi-finals come out, there is a chance that we will meet at some point.” Shamrock’s head coach Brandon Kaleniecki said, “Quite a lot seems to be happening which I think is evidence of our two programs to get as far as possible and it’s a game to look forward to.”

Catholic Central broke through at 7:09 in the second half when Shane Szott’s shot deflected off the right spot in the slot and found the way for Catholic Central to take a 1-0 lead.

“Every shot in the net is a good shot,” said Szott. “It doesn’t matter how it gets there, as long as it runs in the back of the network.”

Catholic goalkeeper Nick Galda stopped all 15 Brighton shots that evening as the Shamrocks advanced to the championship game on Friday March 26, 2021 at the USA Hockey Arena in Plymouth with a 3-0 win in the MHSAA Division 1 semifinals. (TIMOTHY ARRICK – Photo by MediaNews group)

The Shamrocks doubled their advantage with 30.5 seconds in the second period when Brenden Cwiek found Will Shields near the left faceoff point and Shields uncorked an explosion that found the top corner.

Brighton was never able to get their offensive going, however, as the Shamrocks had sticks and bodies in the way all night making it difficult for the Bulldogs to get any shots to goal. In fact, the Shamrocks had more shots on goal in the first period (16) than Brighton had for the entire game (15).

“We’re trying to minimize as many mistakes as possible. Just get the puck out of the zone and keep it low,” said Szott. “Playing in the offensive zone is what you want.”

Beale would finish the evaluation with 6:43 in the third game and achieve a tight turnover to 3-0.

Shamrock’s goalkeeper Nick Galda showed a solid performance and got the shutout for Catholic Central.

Catholic Central (17-1) will play Rockford in the Division 1 final on Saturday night. Game time is 7 p.m. in the USA Hockey Arena.

PLYMOUTH – Ryan Marrone’s 13:07 goal in the third half gave Birmingham Brother Rice the final lead and the Warriors hung …

Our top photos from the district championship: Saline vs Belleville