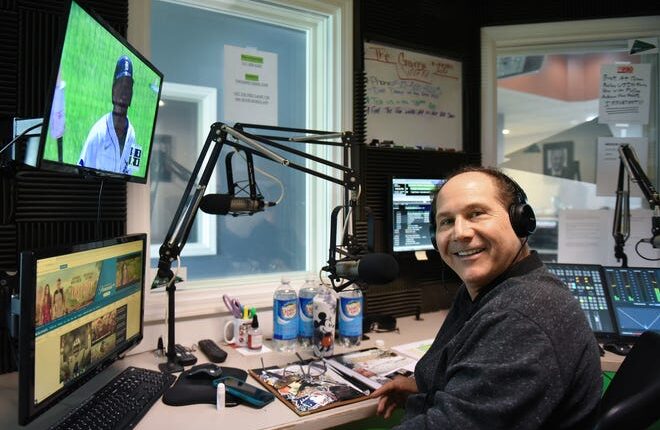 David DeMarco estimates he’s done more than 2,500 live sports talk radio shows in 26 years on the air in Lansing. A lot of them alone, many of them three hours at a time. That’s a five-day-a-week grind that takes a gift for gab, personality in spades, fearlessness behind a microphone and discipline. More discipline than many people who tune in probably realize.

“I’m not saying that I’m never going to be on the radio again or never going to do a podcast,” DeMarco said. “It was just time to walk away from the ‘Mad Dog Show.’ ”

DeMarco, 62, and his wife, Carole, are building a home next to his brother and sister-in-law in Cedar Bluff, Alabama.

It’s been a heckuva run for a guy whose on-air radio background before April 1, 1996, was as a regular caller into other shows, including into “Papa Joe” Chevalier’s national program out of Las Vegas.

It was that April Fools’ Day in 1996 when “The Sports Guys” — DeMarco, Jeff Hager and Randy Plaunt — debuted on WVFN in Lansing.

“He was just this flamboyant character,” Hager said of DeMarco’s call-in persona. “He just really tried to get you going… just trying to be outrageous. And so Randy asked me, ‘Do you know anything about Dave DeMarco?’ ”

Plaunt left soon after the show began, replaced briefly by sportswriter Larry Lage. But for most of their 3 1/2-year run, it was DeMarco and Hager, who these days is the principal at Cavanaugh Elementary in Lansing.

“I was a good foil for him,” Hager said. “Just kind of a steadier voice that kept control of all the bells and whistles and the dials and everything. We made it work for a long time and just had fun doing it. I never thought he would stay with it as long as he did.”

After Hager left the show in 1999, it became “Mad Dog and Co.,” which featured the likes of Sam Vincent, Kelly Miller, Bob Every and others as regular co-hosts.

“Jemele Hill, the first time she was ever on radio was with me (as a co-host),” DeMarco said. “John Cooper, he was the coach of the Capital City Pride (co-hosting) and he ends up (as coach of the Tampa Bay Lightning). That’s a wild story in itself.”

From 2002-06, Mad Dog aired on WQTX-FM in Lansing, before DeMarco’s show returned to WVFN after a six-month hiatus, moving from afternoons to 6 to 9 am for nearly a decade. It returned to afternoons, 3-6 pm, in 2016.

“Mad Dog in the Mornings” meant getting up every day at 4:20 am to get prepared for three hours of solo radio and then a day of sales. For the last 12 years, DeMarco has been full-time at the station in sales, too, beyond selling his own show

“I had to be like Clark Kent and then go into sales mode and hit the streets as a salesman,” DeMarco said. “That’s what a lot of people don’t understand. They just think that I did the show for three hours and I go home and smoke cigarettes and get high and stuff. I had to really buckle down and be disciplined that I was going to do this. And I did.

“It’s not even ratings anymore. It’s how much money that you can bring in. It’s like the mafia — you’re an earner is what you are. And if you can’t earn, you’re not going to be around.”

He’s managed to be around for more than a quarter-century in a volatile business that discards on-air personalities on a whim. He’s had more than 20 producers — including some well-known names: Mike Valenti, Jason Colthorp, Jason Knick, etc.

“He’s hard working. He’s open to ideas, which I appreciate,” said Colin Jackson, DeMarco’s producer for several years beginning in 2017. “I brought in some things that he wasn’t used to doing. And he embraced them. He’s an intense type of person. Not in a bad way. He’s definitely passionate about what he does. He cares a lot about sports. He’s got a lot of stories and he likes to tell those stories and share them with people.”

DeMarco has interviewed Magic Johnson, John Wooden, Sparky Anderson, Donald Trump and seemingly everyone in between. He’s shared a tunafish sandwich with Muhammad Ali and was able to lean on Tom Izzo to keep his mother’s spirits up when she was battling cancer.

RELATED: All the people “Mad Dog” has interviewed in 26 years

DeMarco is truly a son of Lansing — Mount Hope Elementary through third grade, then St. Gerard and Lansing Catholic. He spent five years at Central Michigan University and most of his 20s and early 30s in the family restaurant business. He loves this town as much as he loves being Italian.

“He’s wild and tame all in one,” said his current and final producer, Nathan Vandenburg. “He’s one of those guys who can go from 100 to zero in a matter of seconds. He knows how to work the crowd. He knows how to turn his professional persona on, but he also knows how to just sit back and relax and crack a few jokes.”

“For all of who he appears to be, he’s loyal,” Hager said. “He’s a friend. He is somebody who cares deeply about people and cares deeply about the ones closest to him. That’s the David I know. To me, he’s not Mad Dog. I’ve never called him that, except on the air.”

He’ll be Mad Dog one final time on Friday.

MORE: Alan Haller’s journey to becoming MSU’s AD was formed by the family and community that raised him

MORE: Couch: Mel Tucker is in ‘a race against time’ to turn Michigan State football into a champion

Detroit Tigers not ready to send Spencer Torkelson to Triple-A