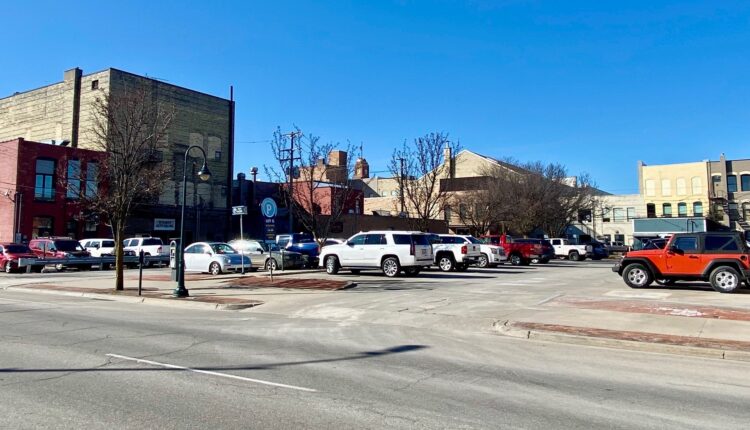 Traverse City officials will receive an update tonight (Monday) on efforts to work with developers and seek proposals for the redevelopment of up to four urban parking lots, ideally with the aim of bringing residential or mixed-use settlements onto these parcels. The project is in line with the city’s strategic plan to consolidate deck parking and remodel lots for higher and better uses, but has been criticized by some downtown businesses that were concerned about losing parking spaces – particularly Lot G next to Modes Bum Steer.

Rob Bacigalupi, Mission North Advisory Group, will update commissioners tonight on recent discussions with city developers and staff about the challenges and opportunities related to the rehabilitation of four parking lots: Lot G, Lot O (northwest corner of the state and Cass next to The Omelette Shoppe). Lot X (behind Hall Street Substation) and Lot T (southeast corner of Union and Grandview Parkway).

Lot G (pictured) has already been approved for redevelopment under a contract to build the new Rotary Square across the street on the TCF Financial Corporation banking site. As part of the agreement, it was planned to move a new mixed-use building in Lot G, including the relocated bank offices and rental apartments. However, the recent merger of TCF Financial Corporation and Huntington Bank means that TCF may now sell the bank property directly to the city and not need a new building. Jean Derenzy, CEO of the Traverse City Downtown Development Authority (DDA), says that in both scenarios, the redevelopment of Lot G – with or without bank offices – meets the city’s goal of converting surface lots into more productive uses like housing.

City commissioners would still have to go through a process to declare Lot O, X, or T as surplus and allow development on one of those sites – and the first step is to get information from developers about real estate options. According to Bacigalupi, who met with five developers plus representatives from Housing North and The Watershed Center Grand Traverse Bay, Lot O and Lot G seem like the best options for redeveloping the four locations. “It appears that lots O and G are low hanging fruit and offer more opportunities for quick success,” he wrote in a report to the commissioners. “The other lots could benefit from the lessons of the first two and possibly additional public input.”

Lot O currently has 26 parking spaces, while Lot G has 55 parking spaces. The city employees found that there are public rainwater systems and a public snow melting boiler on the site of property O and that “when renovating the property, care must be taken not to create internal parking spaces on the property in the north”. A fuel tank was removed from the area in 2009; More could still be available, said the staff. There are no local utilities in Lot G, except for overhead lines (relief may be required if they are developed so that city employees can still access this system) and “high-intensity, 24-hour, mixed-use” enable. A developer told Bacigalupi that developing lots O and G was a breeze, but expressed concern about the other two locations.

These lots T and X have major obstacles to redevelopment. Lot T with 150 parking spaces will be used for downtown permits parking and will handle overflow parking for the Sara Hardy Downtown Farmers Market. The property is also used for snow storage in the city in winter and for some National Cherry Festival events in summer. The city would need relief to continue to have access to an 8-inch aqueduct running under the property. Lot X is owned by Traverse City Light & Power, for which the utility is required to enter into a contract to sell this property. It has 42 parking spaces with major utilities on-site, including electrical circuits, a substation, and a 36-inch substation sewer line. Both car parks are located near the Boardman River and offer opportunities to improve the boardwalk and public access to the river, as well as challenges to ensure the watershed is adequately protected.

Overall, the developers showed interest in the idea of ​​a partnership with the city to renovate one or more plots of land in the city center. “Each developer has a different approach, but everyone is interested in the opportunity to develop one or more of these lots,” says Bacigalupi. “For example, a developer specializes in housing workers and wants at least 80 percent of the units at or below 80 percent AMI (Area Median Income). Another does not want to be restricted by goals, but rather to allow the market to dictate the mix of units. A third would welcome income targets in exchange for incentives such as a neighborhood business zone. “City commissioners will be discussing a separate project tonight, a proposed development at 309 West Front Street adjacent to the new 4Front Credit Union building that also aims to move 80 percent AMI-oriented rental homes through a neighborhood corporate zone bring a kind of tax break for property developers.

Developers and staff also shared some concerns about downtown land redevelopment, including utilities present on some of the targeted parcels, high city taxes (a particular challenge if the goal is to develop rental apartments), and the loss of parking spaces in the city Downtown. “The question of parking related to a general question of whether all lots would be offered and possibly sold at once,” wrote Bacigalupi. “Or are they being sold one after the other as planned in order to enable the systematic replacement of parking spaces?” Mary Zacks, a downtown property owner, sent the DDA a petition signed by several dozen downtown employees – including some business owners – specifically to protest the redevelopment of Lot G next to Modes Bum Steer. Zacks said Lot G’s provided parking spaces are “essential to downtown business success” and the refurbishment of the package would reduce “much-used and needed parking spaces”.

Derenzy admits that it remains a difficult balancing act to provide enough parking space to support retailers and restaurants in the city center while making optimal use of the land and bringing much-needed rental apartments into the city center. “You need to get somewhere downtown where you can develop lots without harming retail,” she says. “Is that easy? No, but you need infill development to have housing. They are trying to find the best practices for a healthy, prosperous inner city. It all depends on the bigger vision of how to stack the parking lots and get better land use. “

These are likely some of the considerations city commissioners consider when potentially developing one or more lots. This process could soon result in developers creating a formal call for proposals (RFP) once the commissioners decide which lots to pursue first. Bacigalupi said commissioners need to debate whether the RFP should lay down hard-and-fast requirements for residential targets or give developers more flexibility to propose different options. In the future, developers will need “clear guidelines on how to respond to the RFP, more clarity on how to relocate utilities that might get in the way, (and) more detailed information on what facilities are needed from the city,” so Bacigalupi.