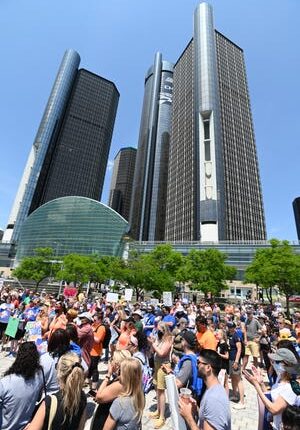 About 200 people gathered along the Detroit riverfront on Saturday afternoon carrying signs that said things like “Ban assault weapons” while chanting “Enough is enough” to protest gun violence and demand action on gun control from legislators.

The rally and march in downtown Detroit was part of a day of protests across the state and nation organized by the student-led group March for Our Lives just weeks after 19 elementary school students and two teachers were shot and killed in Uvalde, Texas.

Activists and politicians took to the microphone to decry gun violence, addressing a multi-generational crowd from grandparents to young families to high school students. Some in the crowd had on weathered T-shirts that read “Moms Demand Action,” an anti-gun violence group. Others were putting on new March for Our Lives T-shirts.

Shirley Beardslee, 69, of Oakland County, who wore a floral top underneath a blue March for our Lives shirt, attended the rally with her husband and their two grandsons, who are both in elementary school.

“I remember when Columbine happened and you couldn’t believe it was even occurring,” Beardslee said. “Now it’s happening all the time.”

Beardslee said they came out to support the recent gun violence victims in Uvalde, Texas, Buffalo, New York, and Oxford, Michigan. She said she also wanted her grandsons to experience collective action.

“You want to keep them as naive and protected as possible, but they need to see people rallying against the problems in the US to know they have the right to speak,” she said.

The crowd was largely filled with adults, but high school students were in attendance as well.

Sofia Benevides-Colon came to the rally with her mom after they found the event online.

“I wanted to express how we feel,” she said of her reasoning for coming out on Saturday.

The 16-year-old from southwest Detroit, Benevides-Colon said protests are important for letting the government know that it needs to do better. She has also attended several Black Lives Matter protests.

“It’s a bit scary thinking someone can walk in with an armed weapon,” Benevides-Colon said. “That’s not why I go to school. I shouldn’t be scared.”

Her mother, Aida Colon, said she was proud of her daughter for getting involved.

“You hope they kind of take it with them as adults,” she said.

Lansing Christian leads in Division 4 after opening round

Letter: Fidler | Letters To The Editor