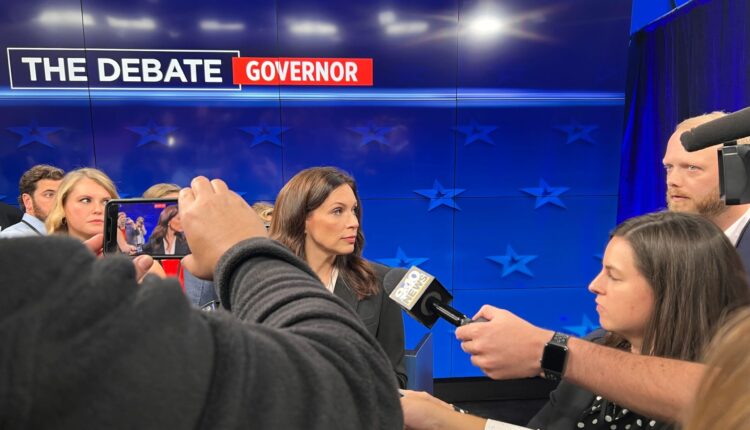 At campaign events in the last week, Dixon questioned the safety of COVID vaccines ⋆

But Dixon’s statements on COVID-19 before she began running for governor and after show several contradictions on vaccines, as well as claims on the virus’ health impacts that are not supported by medical research and experts. Whitmer and Dixon are facing off in the Nov. 8 election.

In the Oct. 13 gubernatorial debate, Whitmer claimed that Dixon “said kids couldn’t get COVID.” Afterward, Dixon told reporters, “My own children have had COVID, so I would never say that.”

However, as Bridge Michigan reported, in the 2020 episodes of the right-wing “America’s Voice Live” show that Dixon co-hosted, she said “our kids are not at risk” for catching COVID-19.

On the May 11, 2020, episode, Dixon said there was “no evidence” kids could transmit the virus while, on the July 7, 2020, episode, she again referenced her belief that young people were not affected by COVID.

“You heard so many people saying that this is not a virus that affects the young students, and that it’s more important for the students to be in the classroom than to be at home with a mask on,” she said.

While it is true that children face lower rates of hospitalization and death from COVID-19, it is currently the fifth leading cause of death for children younger than 5.

Dixon spokesperson Sara Broadwater said in a statement to the Advance that “Tudor never said that kids can’t get COVID.

“Whitmer and her friends in the media are once again being dishonest,” Broadwater continued. “Tudor said kids were not at risk in the same way as older adults and numerous studies support her comments by outlining that the overall risk to children is ‘extremely low.’”

Broadwater said Harvard Medical School found that kids often have no symptoms or milder symptoms. An October 2021 article from Harvard Medical School titled, “Children and the Spread of COVID-19: Study finds kids to be potential spreaders of COVID-19, emerging variants” said that “most children are asymptomatic or only mildly symptomatic when they develop COVID-19, giving the misconception that children are less infectious.”

Researcher Lael Yonker said the findings reinforced the importance of masking for children: “The implications of this study show that masking and other public health measures are needed for everyone — children, adolescents, and adults — to get us out of this pandemic.”

In the days after the debate, Dixon made statements at two public events expressing doubts about the safety of COVID vaccines. Both the Moderna and Pfizer/BioNTech vaccines have received full approval from the U.S. Food and Drug Administration (FDA).

“We’re seeing now that the news, they’re coming out, and they’re saying, this is a danger for men, young men up to 30, that this could be causing heart disease causing heart failure, causing death,” said Dixon at a Moms For Liberty town hall held on Friday. “So I don’t, and certainly look at our military, those are the people that are in our military for the most part. So I don’t believe that we should be mandating experimental drugs.” Ken Brake of Westland had his first COVID-19 vaccination at Ford Field in Detroit on March 23, 2021 | Ken Coleman

On Saturday, Dixon again talked about the “dangers” of the COVID vaccine during a campaign event in Marquette.

“There will be no more mandates on experimental vaccines,” Dixon told the audience, which cheered. “The potential dangers of this vaccine, as you see every day, they’re saying, ‘Oh, maybe young men shouldn’t be getting this, even young men up to their 40s, shouldn’t be getting this,’ Dixon told the audience. “We’re seeing the dangers of mandating that people get a vaccine. We know a lot more now. We have to make sure this never happens again.”

While Whitmer has repeatedly encouraged Michigan residents to get vaccinated, the state does not have a COVID vaccine mandate.

Dr. Lisa Maragakis and Dr. Gabor David Kelen wrote in a February 2022 article for Johns Hopkins Medicine that the COVID vaccines had undergone a rigorous process to gain final approval from the FDA.

“After many months of studies and more than 500 million COVID-19 vaccines being given in the U.S., the FDA has a lot of information on how safe and effective the vaccines are in protecting people, how well they work to prevent severe coronavirus disease, and how the vaccines are safely and consistently manufactured,” Maragakis and Kelen wrote.

Broadwater cited Florida Surgeon General Joseph Ladapo as to why Dixon brought up concerns about the COVID vaccine in recent days.

“This past week, Tudor was asked about vaccine mandates and noted concern over recent reports of experts questioning whether young men were at risk for heart attack after taking the vaccine. This was in response to the Florida surgeon general advising young men 18-39 not to get the vaccine due to ‘modestly increased’ risk of cardiac-related death,” Broadwater said.

Ladapo, an appointee of GOP Gov. Ron DeSantis, has made controversial decisions on COVID before, with USA Today reporting he issued “an order preventing schools from quarantining students exposed to COVID-19 and refused to wear a mask in the office of a senator who was receiving cancer treatments.” Ladapo also testified to Congress in June against COVID vaccines for children.

National vaccine experts have pushed back against Ladapo’s claim on heart attack risk from the vaccine. The U.S. Department of Health and Human Services (HHS) responded that Lapado’s warning was “flawed” and goes against scientific research.

“This decision is flawed and a far cry from the science. COVID-19 vaccines have been proven safe and effective, and severe adverse reactions are rare. Vaccines were evaluated in tens of thousands of participants in clinical trials and since then, tens of millions of Americans have received COVID-19 vaccines,” said Sarah Lovenheim with HHS.

Dr. Natasha Bagdasarian, chief medical executive of the Michigan Department of Health and Human Services (DHHS), has said the risk of children developing myocarditis after being infected from COVID-19 is higher than the risk from the vaccine.

“We are always weighing risks versus benefits. And the benefits of the vaccine far outweigh any risk associated with the vaccine,” said Bagdasarian.

As a talk show host, Dixon made repeated statements that contradicted public health experts on COVID, as the Daily Beast first reported.

On the June 23, 2020, episode of “America’s Voice Live w/ Tudor Dixon and Matt Locke,” Dixon speculated on the need for a vaccine.

“Now we have a top Italian doctor, his name is Dr. Matteo Bassetti,” said Dixon. “And he says that he thinks the virus is changing in severity. And he says in early March and early April, the patterns were completely different. People were coming to the emergency department with a very difficult to manage illness, and they needed oxygen and ventilation, some developed pneumonia. Now in the past four weeks, the picture has completely changed in terms of patterns. Yes, probably it could go away completely without a vaccine.”

Bassetti, who is the head of the Infectious Diseases Clinic at the San Martino-IST University Hospital and a professor of infectious diseases at the University of Genoa, clarified his comments at the time as being personal observations and not scientific conclusions and at no time did he speculate the pandemic would disappear without a vaccine.

More recently, at a GOP gubernatorial forum in Livingston County in May, Dixon criticized Whitmer for not allowing residents to access alternative COVID-19 treatments such as ivermectin, typically used as an animal dewormer, and hydroxychloroquine, which is normally used to treat malaria patients.

“Gretchen Whitmer threatened people who were going to give out the other therapeutics in this state and we have to hold them accountable for that because there could have been lives lost because of the fact that she would not allow people to have hydroxychloroquine and ivermectin,” said Dixon. The FDA has warned the public not to take ivermectin for COVID-19 purposes, citing reports of patients who had been hospitalized after self-medicating with ivermectin. Additionally, studies have shown the drug to have no discernible impact on the disease.

The National Institutes for Health in January reviewed studies on hydroxychloroquine and concluded that they confirmed previous recommendations about “a lack of efficacy and possible harm of hydroxychloroquine in the treatment and prevention of COVID-19.”

However, Broadwater said in a statement that it’s “not a Republican idea to pursue alternative treatment” and continued to claim that physicians say they are “effective.”

“As it relates to COVID policy overall, Tudor’s view has always been to air on the side of freedom. That means personal freedom and medical freedom, which includes seeking out alternative treatments from a personal doctor,” Broadwater said.

Maeve Coyle, a spokesperson for the Whitmer campaign, told the that Dixon’s conflicting statements on COVID fit into a pattern.

“Pick any issue from abortion to elections to public health, and Tudor Dixon has a dangerous conspiracy theory for it,” said Coyle. “No matter how much she tries to pull the wool over voters’ eyes, they can roll the tapes and see exactly what she has said with no regard for the consequences to Michiganders.”