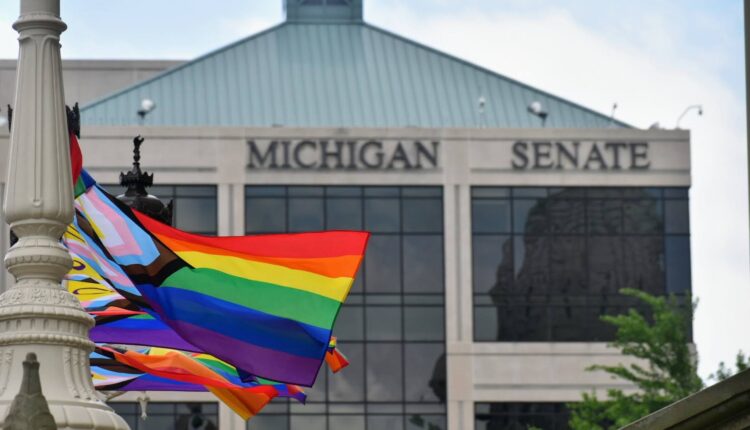 As the GOP ramps up anti-LGBTQ+ rhetoric, advocates worry about the toll on kids ⋆

As attacks on LGBTQ+ people have begun to harmonize toward a pre-election crescendo, state Sen. Jeremy Moss (D-Southfield) had had enough.

In fact, he’d had more than enough.

Taking the floor of the Michigan Senate on Tuesday, Moss blasted a GOP-sponsored resolution condemning teacher training videos from the Michigan Department of Education (MDE), which have been misleadingly hyped by GOP leaders, including gubernatorial nominee Tudor Dixon, as instructing school employees how to facilitate the sexual transition of children under their care, while keeping the process a secret from parents.

The MDE has called the allegations “patently false and deliberately divisive,” and defended the training as providing “safe, supportive, and inclusive school climates where all students can thrive — especially students who identify as LGBTQ+.”

Moss, the first openly gay senator in Michigan, reminded his colleagues that the ultimate target of their vitriol was children.

“It’s really confounding to me that you don’t have any real realization with all these attacks on LGBTQ youth, that, yeah, I was once an LGBTQ youth, too,” said Moss. “I struggled. I struggled just as hard as the kids that are struggling today with this renaissance of hatred toward the LGBTQ community.”

Ironically, that “renaissance of hatred” comes at the same time Michigan’s LGBTQ-+ legislative caucus is anticipated to become its largest ever next year.

Moss noted the contrast between the daily interactions he has with Republican colleagues, including inviting he and his boyfriend to dinner, and resolutions like the one he was protesting.

“It’s like, you like me now, right? Because I’m this consenting adult. I don’t have anybody grooming me as a 36-year-old to continue to be an openly gay person,” Moss said, referencing the ongoing GOP slur that seeks to equate the LGBTQ+ community with sexual predators.

It was that same line of attack that drew national attention earlier this year when state Sen. Lana Theis (R-Brighton) used a fundraising email to accuse Democrats like state Sen. Mallory McMorrow (D-Royal Oak) of being “groomers” who “sexualize” children, echoing many who believe in the far-right QAnon conspiracy theory. McMorrow is straight and supports LGBTQ+ rights.

While the welfare of children is purportedly the concern at the heart of the attacks on educators, the opposite is often the case.

The Trevor Project’s 2022 survey on LGBTQ youth mental health determined that while nearly one in five transgender and nonbinary youth attempted suicide in the past year, LGBTQ youth who found their school to be LGBTQ-affirming reported lower rates of attempting suicide. And to that very point, state Rep. Laurie Pohutsky (D-Livonia) asked what efforts GOP sponsors of the resolution were taking to ensure LGBTQ+ children would be cared for if teachers and schools were forced to “out” them to parents who are not always supportive, and in fact can often be hostile.

“Do we also have a plan to appropriate funds to provide resources for the LGBTQ kids that get kicked out of their homes after being outed to unsafe parents?” asked Pohutsky, a member of the LGBTQ-+ caucus. “Or increase penalties for said parents that abuse or neglect these kids?”

“Every child deserves to learn and thrive in a safe environment free from bullying and harassment,” Knott told the . “Teachers have many responsibilities, but chief among them is making sure that students feel safe. Unfortunately, too many LGBTQ+ students feel unsafe and unwelcome at their schools. Supportive teachers and school administrators save students’ lives. Visibly supportive school districts and teachers can ensure that LGBTQ+ students feel safe, welcomed, and encouraged to learn and thrive.”

To help further that message, Equality Michigan and other advocacy groups, including Stand with Trans, Michigan UU Social Justice Network and Inclusive Justice of Michigan, held a rally Wednesday at the Capitol in Lansing.

Slated as a demonstration to let “diverse youth know that they are not alone,” it also featured state McMorrow and Lt. Governor Garlin Gilchrist, who reminded those in attendance that candidates and proposals on the ballot Nov. 8 would make a major difference for LGBTQ+ rights, as well as reproductive and voting rights.

Career educators are also standing up to the attack on MDE efforts to assist teachers with providing for the needs of their LGBTQ+ students.

Board of Education member Dr. Pamela Pugh and Dr. Mitchell Robinson, who are both Democratic candidates for the board this fall, released a joint statement of support.

“We want schools to be safe, welcoming, and inclusive for all children and adults who work and learn in them” read the statement. “Supporting educators and students with diverse backgrounds and identities, whether it’s students of color or those who identify as LGBTQ+, should not be a divisive issue. Instead, we must continue to work together – educators, parents, students, and the community – to ensure that students are treated with dignity and respect regardless of race, ethnicity, gender identity, sex or any other identifying characteristic.” While messages of support are important, it is the indifference of so many others to open bigotry, whether intentional or not, that is most disturbing to Democratic Attorney General Dana Nessel.

At a recent Michigan Alliance Against Hate Crimes event, sponsored by the Michigan Department of Civil Rights (MDCR), Nessel spoke on that very issue.

“When we refuse to acknowledge that the exact same thing that led to the rise of Adolf Hitler in the 1930s in Germany is exactly the same thing that we’re experiencing now, here in our beloved United States, then we are destined to repeat that dark, repugnant chapter in world history,” said Nessel.

“When we cover our eyes, or we plug our ears, or even when we say, ‘Oh, it’s too close to an election, it’s not appropriate for me to say anything,’ or when we don’t want to risk alienating a political party or our financial supporters or companies that simply say, ‘You know what, we’re gonna continue to contribute to this demagogue, because maybe we’ll sell more trucks, or we’ll be able to lobby for appropriations in the next supplemental bill’ — then we are all guilty of aiding and abetting in the conspiracy to commit hate crimes. We’re not heroes. We’re not champions of the marginalized. We are merely complicit. And we deserve whatever comes next.”

Dixon this week held a press conference outside of the MDE announcing she would consider banning “pornographic” books in K-12 schools if she were elected governor. The event, which took place during Banned Books Week, comes amid right-wing groups clamoring for books about race and LGBTQ+ issues to be banned across the country.

The Republican, a former right-wing commentator, also supported banning LGBTQ+ topics in curricula and transgender athletes from competing on sports teams that align with their gender identity. Dixon called on State Superintendent Michael Rice to resign.

In elections after the U.S. Supreme Court ruled in 2015 that same-sex marriage should be legal — which include a Michigan case Nessel had argued before she was AG — Republicans haven’t campaigned much on their opposition to LGBTQ+ rights.

But that’s changed in 2022, where top Republicans in Michigan and across the country are running on anti-LGBTQ+ platforms and launching personal attacks.

That’s a remarkable development in the eyes of Michigan Democratic Party Chair Lavora Barnes, who told the Advance that the positions Republican candidates and elected officials have been staking out on these issues would have disqualified candidates in previous election cycles. “I am shocked almost every day by something new and hateful that comes out of the mouths of the Republicans running for office here in Michigan and across the country,” said Barnes. “And I don’t understand why they think that hate and anger and fear are their brand, but clearly that is the brand that they are trying to sell to voters here in Michigan and across the country.”

That assessment is not news to Moss, who used Tuesday’s floor speech to make explicit the connection between GOP rhetoric and potential harm to the LGBTQ+ community.

“But your obsession with LGBTQ youth is all you have to offer. You are hurting our kids. Parents and children and their schools already have enough to deal with among one another, without legislative Republicans or a candidate for governor infusing hatred to further marginalize those who are already struggling to find the support that they need. If you were sincere in talking about what’s going on in our education system, did you reach out to anybody who was LGBTQ? Did you reach out to students? Did you reach out to their families?”

Moss then closed with an observation on what he views as the GOP hypocrisy of claiming to care for the welfare of kids, while simultaneously taking actions that have negative consequences.

“It is really rich for you to lecture to me on what it’s like to grow up LGBTQ,” he said.

Watching weekend showers as we struggle to warm up