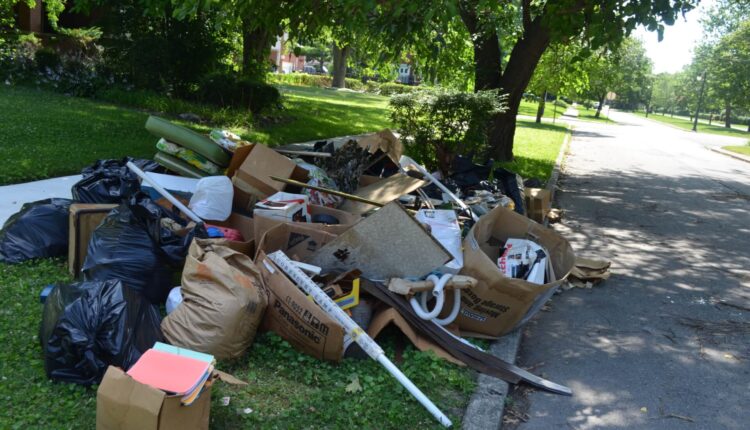 The summer of 2021 brought an onslaught of heavy rain, flooding freeways, knocking out power and leaving standing water in basements in communities across metro Detroit. While those memories are fresh for many, the National Oceanic and Atmospheric Administration (NOAA) warns an increase in extreme rainfall could be on the horizon.

NOAA recently released its 2022 state climate summaries that provide a state-by-state look of historical data and a projected outlook of climate conditions.

According to the report, Michigan has seen an increase in extreme rainfall events, with the wettest consecutive five-year period running from 2016 through 2020. Increased  precipitation could lead to more flooding and sewer backups in communities already plagued by issues with stormwater infrastructure.

NOAA also warned that Michigan could face “unprecedented warming” this century. Temperatures in the state have risen about 3 degrees Fahrenheit since the start of the 20th century, foreshadowing dangerous levels of heat in urban areas like Detroit, the agency said.

And the higher temperatures and increased rainfall will also carry over into impacts on agriculture.

According to Michigan Sea Grant, the forecasted environmental change could have serious impacts on flooding and Great Lakes water levels.

Gabriela Alcazar, the network manager for the Michigan Environmental Justice Coalition, has lived in Detroit for 12 years. When her house flooded in 2014, she lost her water heater, a minimal financial hit. But last summer, the cost was much more.

For low-income families, whether they were homeowners or renters, the flooding placed them underwater, both literally and figuratively, Alcazar said. Without insurance, which many low-income families cannot afford, it can also be hard to qualify for state and federal support, especially for people who are undocumented, she said.

“I remember taking a family to go retrieve their car after it got lost in the flood and even that was like a disaster because [you need] to make sure you have all your paperwork to get your car,” Alcazar said. “She didn’t have her paperwork because her house just got flooded.”

High-intensity rain events are becoming more frequent, but the resilience against these storms hasn’t changed, said William Shuster, chair of the civil and environmental engineering program at Wayne State University.

I remember taking a family to go retrieve their car after it got lost in the flood and even that was like a disaster because (you need) to make sure you have all your paperwork to get your car, She didn’t have her paperwork because her house just got flooded.

Intense storms have tested the city’s stormwater infrastructure, including structures that are 100 years old, Shuster said. These systems can recover, but only because they empty out over time. During the height of the storms, when the city’s wastewater system begins to overflow, that’s when everything falls apart, Shuster said.

There also is a disparity in response between communities within the city and its suburbs.

Thousands of people were impacted by flooding, enduring backups of septic flow that ruined their basements and made their homes almost dangerous to live in, Shuster said. However, communities like Grosse Pointe Park have a higher median income, giving it more financial resilience than some neighboring communities in Detroit’s east side.

The lower east side is also an extraordinarily high traffic area for wastewater, Shuster said.

While people tout that Detroit has one of the largest wastewater treatment plants in North America, there are issues with only having one treatment plant. As you get closer to the facility, you have millions or billions of gallons of wastewater flowing into eastside neighborhoods, placing them in the crosshairs of insufficient infrastructure with insufficient capacity, Shuster said.

Shuster said he recently replaced his wastewater sewer lateral pipes to connect to the municipal wastewater collection system. It cost about $10,500.

“If we’re expecting homeowners, landowners, landlords for that matter, to basically take on that cost, yeah, that’s a lot to ask folks,” Shuster said. As temperatures continue to rise, city residents face the urban heat island effect, where dense concentrations of pavement and buildings paired with high temperatures and humidity can cause dangerous heat index values in places like Detroit, Michigan Sea Grant points out in its summary of the NOAA report.

In November 2021, DTE Energy, which supplies power to much of southeast Michigan, said it would be working to upgrade its electrical grid. In a statement, DTE noted that portions of its grid were more than 90 years old, and would be challenged to reliably supply power to its 2.2 million customers.

Without reliable power, Alcazar stressed that the consequences are dire. Projected changes in total winter precipitation for the middle of the 21st century compared to the late 20th century under a higher emissions pathway. Hatching represents areas where the majority of climate models indicate a statistically significant change. Precipitation is projected to increase in Michigan, with the largest increases projected for winter and spring. | Source: CISESS and NEMAC.

“They tell you to stay inside and [to limit exposure] to the heat, but how do you do that when you don’t have power and the inside of your home is also a hellscape,” Alcazar said.

“When we talk about having more extreme heat days, you know, what happens during those days is people who have issues like asthma or other health conditions that essentially have been caused by this disproportionate, polluting industry. It makes everything worse for those people,” Alcazar said.

According to a 2021 report from Michigan Department of Health and Human Services, asthma was most prevalent in Detroit with 46% more cases than in the rest of the state’s population. In 2019, Black residents of Detroit were hospitalized for asthma at three times the rate for white people.

“Obviously, Detroit is a predominantly Black city. We have a very large population of immigrants, in southwest Detroit especially. We see a lot of this cumulative impact around pollution,” Alcazar said.

“It’s a disaster because people of color are not getting the same kind of services,” Shuster said.

U.S. Rep. Raúl Grijalva (D-Ariz.) sponsored the measure that would establish multiple environmental justice requirements, programs and advisory bodies to address the disproportionate effect health and environmental policies have on low-income communities, communities of color, and tribal or Indigenous communities. Flooding has impacted many areas of Michigan this spring, including Ingham County, May 16, 2021 | Susan J. Demas

Michigan’s changing climate also means increased flooding for the agricultural industry and higher water levels and erosion along the Great Lakes. In addition summer droughts are expected to worsen.

While change in agriculture can be difficult, the Michigan Environmental Council is working to change to the state’s generally accepted agricultural and management practices.

One of the changes is increasing the size of storage required and reconsidering storage to prevent runoff into nearby water sources, which can cause issues like toxic algae blooms, said Megan Tinsley, water policy director at the Michigan Environmental Council. Annual time series of the average water levels for Lake Michigan–Huron from 1860 to 2020.
Source: NOAA GLERL.

The group has also advocated for treating manure in the same way that human waste undergoes treatment.

Nutrients get into waterways through spreading manure on the ground and it often gets overspread, Tinsley said. If manure is treated it can keep rainfall events from flushing large amounts of nutrients into nearby waterways.

The environmental council is also pushing for the state to invest more money into wetlands as a way to store excess water and filter out nutrients that can cause algae blooms.

Meanwhile, the highest documented water levels since 1886 were recorded in the Great Lakes in 2020. Levels have fluctuated over a range of 3 to 6 feet since the late 19th century, with lake levels rising rapidly since 2013, according to NOAA.

High lake levels can destroy beaches and erode shorelines, while low lake levels can affect water supply and quality, restrict shipping and result in the loss of wetlands. A lack of ice cover from fluctuating temperatures can also lead to shoreline flooding and erosion.

While property owners may be tempted to rush and protect their property, environmental advocates say it’s best to wait before building barriers to protect the shoreline. People imagine the shoreline is where it’s always been, but the nature of the dune ecosystem is to change, Tinsley said.

Allowing areas to grow and shrink is better from an environmental perspective than hardening the shoreline and changing the way the coastline shifts when the water overtakes those barriers, Tinsley said.

In northern Michigan, the Tip of the Mitt Watershed Council has been working to teach property owners to be less reactive to fluctuating water levels.

In some cases, moving property away from the shoreline can be cheaper than installing boulders to shield the shoreline, said Jennifer Buchanan, associate director of the Tip of the Mitt Watershed Council.

Many shoreline issues are the result of people building too close to the shoreline, filling in wetlands and removing critical vegetation along the shore, Buchanan said.

When building along shorelines, it’s important to take changing water levels into account, but people shouldn’t be building on these fragile ecosystems to begin with, Tinsley said.

Fluctuating water levels have proven to be particularly devastating for shoreline communities in northern Michigan, with some losing their infrastructure as the result of high water levels, Buchanan said.

When water levels are high, then the water table is high and there is more flooding, which can damage community infrastructure, Buchanan said. Observed and projected changes (compared to the 1901–1960 average) in near-surface air temperature for Michigan. Observed data are for 1900–2020. Projected changes for 2006–2100 are from global climate models for two possible futures: one in which greenhouse gas emissions continue to increase (higher emissions) and another in which greenhouse gas emissions increase at a slower rate (lower emissions). Temperatures in Michigan (orange line) have risen almost 3°F since the beginning of the 20th century. Shading indicates the range of annual temperatures from the set of models.
Source: CISESS and NOAA NCEI.

The current stormwater management systems are not sized to handle the current frequency, intensity or amount of rainfall, Buchanan said.

This issue can also impact homeowners who live outside of the communities, with elevated water levels impacting septic fields, which can lead to waste making its way into inland lakes and then the Great Lakes, Buchanan said.

As part of its efforts the watershed council has been encouraging homeowners and local governments to consider green stormwater infrastructure projects that address rainfall and snowmelt as close to the source as possible.

According to the U.S. Environmental Protection Agency, green infrastructure utilizes plants and soil, as well as landscaping and permeable surfaces to reduce the flow of stormwater into sewer systems and surface water.

“Green stormwater infrastructure is pretty low-tech stuff and something that we should be incorporating more,” Buchanan said.

However, finding support and personnel to manage these systems can be a challenge, Buchanan said.

“A lot of people think, ‘Oh, that’s too expensive. That won’t work,’” Buchanan said. “You know, we get a lot of nos up front and we know that there are plenty of engineers and plenty of examples that can attest to the efficacy of some of these techniques.”