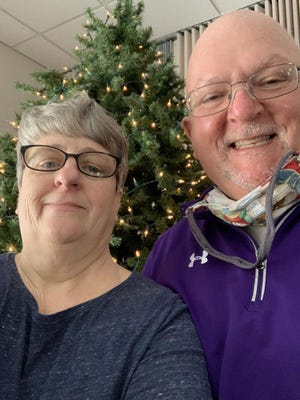 “They said I need an IV,” said Dzwik. “I had no idea what it was anyway. I called my doctor’s office and they agreed and sent me to Quick Care (now McLaren MedCenters in Petoskey). I met all the criteria for it and they decided to give it to me. “

“I would recommend it to anyone who can get it and anyone I know who has underlying medical conditions. I tell them if you get COVID you need to do this procedure right away,” Dzwik said.

A story published in Crains Detroit Business last week mentioned that more than 4,000 people who tested positive for COVID-19 in Michigan were being administered with either of the two in more than 100 hospitals, pharmacies, and emergency centers Approved infusion treatments treated with monoclonal antibodies have included the Eli Lilly and Regeneron therapies across the state.

Additionally, early results show that the hospitalization rate is around 5%, according to the Michigan Department of Health and Human Services, compared to 10-15% in similar high-risk populations.

According to Dr. Jon Sangeorzan, Infectious Disease Specialist at McLaren Northern Michigan, shows promise for antibody infusion therapy for people with mild to moderate COVID-19 who are at high risk of serious complications because of their age or other conditions such as diabetes. Heart or kidney disease and obesity.

Research has shown that antibody treatments can reduce the likelihood of hospitalization and disease progression in high-risk populations by up to 70%.

“As with all COVID things, there is a lot of skepticism and mixed feelings between one group and another group,” Sangeorzan said. “I think the takeaway message is that these products have so far been considered very safe, appear to be very effective, and none of my colleagues and I would have any reservations about receiving any of these products.”

The antibodies used in the infusions are modeled after naturally occurring antibodies found in patients who have recovered from COVID. Instead of harvesting them from recovering patients, they are synthesized in a laboratory, which improves purity and safety, and also makes them available to those who reject human blood products.

Sangeorzan said McLaren Northern Michigan treated 116 COVID patients on site with antibody infusion therapy and the vast majority of them “literally felt better in a matter of hours.”

“We only had three hospitalizations within this group from COVID, none of them eventually required mechanical ventilation and none of them died,” Sangeorzan said. “One would expect at least one or maybe two deaths in 116, or more people who need high levels of oxygen, none of which have happened.

“Although it is not a large sample, it increases the level of evidence.”

To be eligible for treatment, a person must be 65 years of age and older, diagnosed with COVID, and be at high risk of serious complications from age or other medical conditions such as diabetes, heart or kidney disease, or obesity.

Treatment must be given within 10 days of the onset of COVID symptoms.

Dzwik said she was eligible for treatment because she had high blood pressure and had been diagnosed with diabetes but was now being controlled by diet.

“You go in, you sit for a couple of hours, they put an IV in you and it’s good stuff, it helps,” said Dzwik.

McLaren Northern Michigan works with Dr. Gustav Lo of Northern Michigan MedCenters in Petoskey (formerly Quick Care and Urgent Care) to enable the administration of the single intravenous infusion. Patients can be referred by their own doctor after a positive test or come straight to the clinic for a symptom assessment, COVID test, and assessment of suitability for treatment.

“There’s a lot of data online when people want to look online,” Sangeorzan said. “The CDC has a complete, patient-friendly list of documents that you can go through for days for first-hand information from the federal government in layman language for further reading.”

Lynn Sutfin, spokeswoman for the Michigan Department of Health and Human Services, said Crains’ smaller rural hospitals and the Upper Peninsula began dosing their patients earlier than larger urban hospitals. For example, among the first 1,500 patients to receive the therapies, more patients were treated in hospitals in the Upper Peninsula (157) than in Detroit (91).

Antibody clinics in Michigan can be found using an online locator offered by the U.S. Department of Health at https://protect-public.hhs.gov/pages/therapeutics-distribution#distribution-locations

According to the locator, both McLaren Northern Michigan in Petoskey and Mackinac Straits Hospital in St. Ignace are listed as distribution locations, as is Hometown Pharmacy in Traverse City.