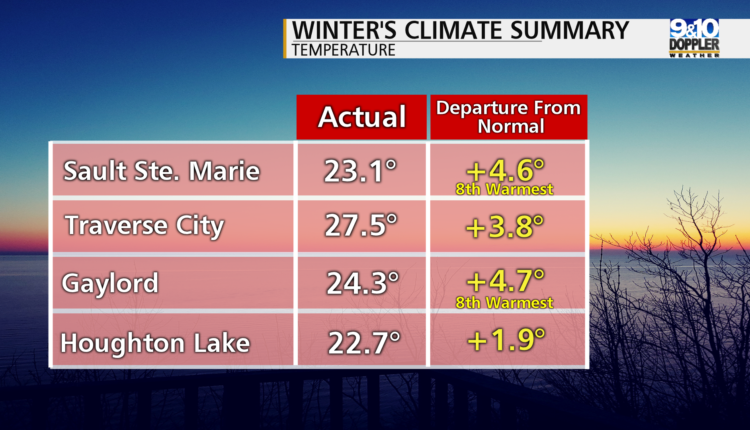 Another Warm Winter Across Northern Michigan

The 2020-2021 was again an above-average winter. Although we had arctic air for two weeks, the remainder of the winter in northern Michigan was above average. Sault Ste Marie and Gaylord had the 8th warmest winter ever.

Precipitation was an anomaly even in winter. Snowfall in northern Michigan continues to be below average. The summer precipitation climate reflects this.

We are still counting snowfall for the season. This is what snow will look like from March 9, 2021.

The warming in winter was typical. It also goes into spring. Gradual warming has been the trend over the past few decades. Traverse City experienced an average of 8.5 days more than average between March and May. That’s over a week of warmth. The “days above normal” refer to the daily average temperature (high + low / 2).

The temperature Traverse City normally feels has warmed 2 degrees Fahrenheit in the spring since the late 1970s.

Not just in Northern Michigan, but also in much of the United States. The US has seen some of the fastest warming in the winter months.

Thundershowers expected Thursday in metro Detroit, then a cool weekend