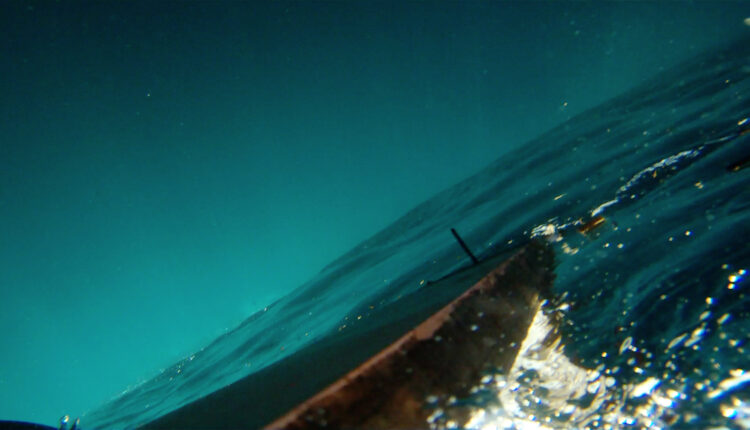 On October 28, 2015, Amel Alzakout and 300 other passengers were traveling across the Mediterranean from Syria to Greece en route to Berlin when their boat began to sink. Alzakout had a camera on her wrist to show a friend what the trip had been like. The camera was still recording when the boat sank. This footage is used in “Purple Sea”, a one-hour film that documents the harrowing experience.

There is no structured narrative, camera movement, or characters. Instead, the camera moves in and out of the water, showing images of mutilated boat equipment and human body parts. The images are accompanied by a monologue that does not give the film an arc. Instead, it appears to be a series of memories and conversations from childhood memories and conversations. The monologue floats in and out and becomes more and more relevant to what is happening on the screen.

Since this footage was not specifically recorded, any movement of the camera is purely coincidental. It certainly feels shaky and gives the film a very claustrophobic and disorienting feel, but from that cramped perspective the film is impressive. “Purple Sea” is unique in that its point of view does not come from its narrator at all. Instead, his perspective is entirely that of the camera. By not focusing on what the camera was recording, Alzakout was able to capture her surroundings in a way that adds to the film’s unrest. The ocean is a huge space, but when filmed this way it doesn’t feel open and free. It feels terribly small.

Most of “Purple Sea” is underwater. Images of life jackets, legs, belts, and socks become unrecognizable very quickly – not that you can ever really forget the context of what you’re seeing – but even after just 10 minutes, it’s easy to get disoriented. When the camera comes out of the water, it’s a blow back to reality. Just seeing the sky will remind you of what is really being shown to you and then the very brief but enormous picture of the hundred passengers surrounding Alzakout becomes even stronger. When the camera finally returns underwater, the muffled sounds of children crying and kicking legs as people try to stay afloat will remind you of the tragedy you are watching.

Some criticisms of “Purple Sea” claim that its lack of structure would serve as part of an art museum rather than a documentary. But what makes a film a film?

It’s hard to imagine someone walking away to see Purple Sea and not being moved in any way. “Purple Sea” is certainly a strange and distinctive viewing experience, but it clearly seems to follow the principles of experimental film and break what viewers would normally expect. It’s immersive, intense, and maybe even different from many experimental films. Because of its uniquely random camerawork, you feel like a fly on the wall and see things that you really shouldn’t see – things that shouldn’t even occur.

This feels like a movie that would benefit greatly from being viewed in a theater rather than on a computer screen. It’s much easier to get distracted watching a movie at home, especially this one. I really longed to be in a totally dark movie theater with no other distractions. What an experience that would be. Watching “Purple Sea” is quite uncomfortable and painful, but the film still finds strength in that discomfort.