The council also directed the Housing Commission to work with the city’s sustainability bureau to investigate construction designs that minimize climate impact.

In all three cases, final designs – including the amount of affordable housing – will depend on market conditions as well as financial sources and constraints as projects go through site plan approval, said Jennifer Hall, executive director of the Housing Commission.

The following is discussed for each site:

The 353 S. Main location, also known as the Palio Lot, is the 24-space public parking lot on the northeast corner of Main Street and William Street in downtown next to the Palio Restaurant. The site is divided into Zone D1 which allows for building up to 180 feet.

The Housing Commission worked with consultancy SmithGroup to study six- and ten-story building options, and both received roughly the same amount of community support, Hall said.

Both options include an active ground floor and no on-site parking.

It’s an ideal location for an affordable housing project, and scores with low-income tax credits and other federal and state funds, Hall said.

The site can be developed with little local funding compared to some other sites, Hall said.

Because it is located in the Downtown Development Authority neighborhood, it can be funded by the DDA, and it can draw on the city’s new affordable Millage residential real estate funds. 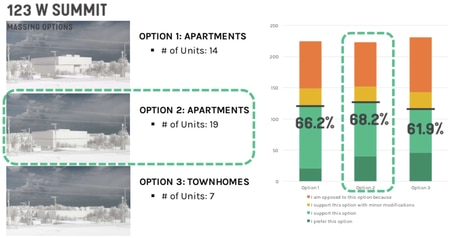 The city’s 721 N. Main St. property is nearly 5.3 acres in a floodplain north of downtown where city guides have been discussing options for routing the future Treeline City Path for many years while they are part of it of the site.

The northwest corner along Summit Street is the only part that is not in a floodplain and suitable for affordable housing development, Hall said.

The council directed the commission to proceed with the division of the property and development of 15-25 affordable housing units on newly created property at 123 W. Summit St.

The apartments are intended for people who earn up to 60% of the median income in the area.

Two comprise a three-story building with 14 to 19 apartments, the other comprises seven two-story row houses.

All three received over 60% community support, with the highest total support for a three story building with 19 units totaling an estimated $ 3 million for development. However, when responding to survey responses such as “I support this option” and “I prefer this option,” the seven townhouses preferred a little more at around $ 1.3 million.

The location can be opened up with affordable residential millage funds and other funding sources, Hall said. 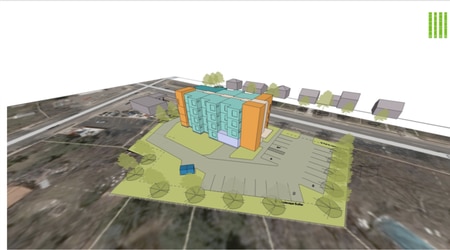 The Housing Commission worked with the Damian Farrell Design Group to review options for 1510 E. Stadium Blvd. where there is an existing city building. Formerly a fire station, it acts as an office for the city’s fire protection office, which is expected to move to the fire station in the city center.

Redevelopment options studied include adaptive reuse of the building for $ 2.9 million, or demolishing and replacing with four maisonettes for $ 2.2 million, or spending $ 4.3 million to $ 4.6 million on construction of a four-story residential building.

The Council instructed the Commission to create around eight to 23 affordable housing units on the site for people earning up to 60% of the area’s median income.

The Housing Commission can continue to make progress on due diligence and design, but could not begin demolition until the fire department cleared the building, Hall said.

The location is suitable for an affordable housing project but has a lower priority than other properties, she said.

The positives are that the location is in a higher-income neighborhood, on a bus route, and close to amenities, she said. While it’s not competitive for tax credits, it’s eligible for other federal funds and urban affordable housing mill funds, she said. The Kline Lot parking lot at 309 S. Ashley St. in downtown Ann Arbor, where the city is considering building affordable housing, is shown in relation to two other nearby public parking facilities.City of Ann Arbor and SmithGroup

The council received a report from SmithGroup this week that also discussed options for affordable housing in two other public parking lots in the city center.

Because of the community’s commitment, the preferred option for 121 E. Catherine St. is a six-story building with 85 to 95 affordable units. The council previously expressed its support for the development of affordable housing on the Kerrytown property.

The Housing Commission has yet to put together a development team and go through the approval of the site plan. SmithGroup recommends pursuing a 5- to 6-story development to maximize street-level parking while creating and enhancing an active and attractive ground floor street scene along Fourth Avenue and Catherine Street.

Lot 309 S. Ashley St., also known as Kline Lot, is the 143-parking lot behind a row of shops on Main Street on the northeast corner of Ashley and William Streets.

SmithGroup reported that the Kline Lot option with the most community support is a 12 to 14 story building with 90 to 100 affordable housing units and 350 to 400 off-the-shelf units and does not make it a major future downtown parking lot.

Additional studies are needed and SmithGroup recommends continuing discussions with the DDA and downtown businesses on long term downtown parking solutions in the context of the Kline Lot development. The advisor recommends completing a downtown parking study, which is currently being conducted but will be difficult to complete until normalization after COVID.

Ann Arbor voters approved a new 20-year tax to fund affordable housing developments last November. One of the first projects expected in the future is a high-rise building on the former YMCA property next to the Blake Transit Center.