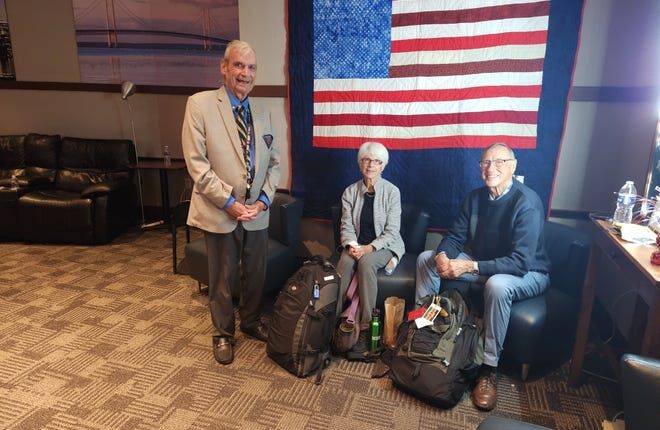 John McCandless, a 32-year Navy veteran, spent a lot of time at Detroit Metro Airport during his time working, and traveling, for Toyota.

Fifteen years ago, he noticed that, unlike other airports, there wasn’t a USO or similar place for active military and veterans to relax in as they traveled through Michigan’s largest airport.

Being a champion for those who served, he decided to change that. Others joined him to bring an independent military lounge to life at the airport.

The Michigan Armed Forces Center, also known as Michigan Freedom Center, opened at 11 am Nov. 11, 2011, in the McNamara Terminal, near Gate A43. The group opened a second lounge in 2015 in the Warren C. Evans (North) Terminal near Gate D17.

Since 2011, over 800,000 active duty military members, reservists and military veterans have stopped by. With 19 million veterans in the US and 554,000 veterans in Michigan, according to the American Legion, the need is real.

“It just kind of happened that way,” McCandless, who retired from Toyota 12 years ago, told me about the time, date and year of the first lounge’s official debut.

“We have lots of military traveling through here (DTW) on their way to Europe, Okinawa (Japan), Africa or wherever,” McCandless added.

With proper identification, active military and veterans can enjoy the comforts of the two military centers — free of charge. Volunteers and part-time staff provide travel services to ease travel challenges and they also have a special care team to comfort the families of lost loved ones who died serving.

The lounges that help so many faced challenging times brought on by the pandemic, which forced their closure for a few months as well as loss of revenue and volunteers.

Times are better and things are almost back to normal but the board that runs the two lounges is looking for a sponsor to give them a “cushion” to weather any future tough times. They are seeking a sponsor who would get naming rights. Specifics, such as how long it would last, or whether it would include one or two lounges, are being determined.

The American Legion is donating resources and providing volunteers to help staff the centers.

Marilyn Britten, retired Army, who is commander of Michigan’s Department of the American Legion, said of the spaces that she also has stopped by while traveling: “It is so needed by military and veteran travelers. … Just a quiet place to sit, grab a water and gather your thoughts. A safe… place for families with little ones and a break for parents to catch their breath. I have used it when I have traveled through Metro and it was staffed by a very friendly volunteer with helpful tips for the airport.”

“The funding was dropping fast (due to COVID-19) and the then-executive director was going to move on to another post,” he said. “I began organizing fundraising, public relations and marketing activities. I am one of three part-time staffers. We maintain as low of a staff budget as possible to put our resources into the centers.”

He said more than 100 volunteers work to keep the centers open seven days a week (they work four-hour shifts). “We can always use more people to help with the shifts,” he said.

“We are also continuously fundraising. We have a successful annual golf outing (in the summer months) along with contributions from corporations, military defense contractors, and Delta’s big support, plus a couple foundations, along with gifts from individuals — it all helps to keep our doors open,” Lang said.

“Delta’s support of active-duty military and veterans in our workforce and the community remains a top priority, and we celebrate the growth of the Michigan Freedom Center military hospitality lounges over the last 11 years,” said Tad Hutcheson, Delta’s managing director, community engagement.

“We’re proud to give back to veterans and their families as they prepare to travel, whether being deployed, returning home from a military assignment or accompanying fallen heroes to prepare for a final journey home.” Delta donated a conference room where the Michigan Freedom Center is still located and it has donated money as well to the organization.

The lounges are a gesture to show active military and veterans how much they are appreciated.

“These military hospitality lounges provide recliners and couches so travelers can have a comfortable place to decompress between flights,” Lang said. “We have tables where they can work on their laptop. We offer Wi-Fi, TV, flight board for tracking planes , water, coffee, tea, snacks, cheese sticks, candy, granola bars, etc. We even have toys for kids.”

He added, “Our goal is to be of service to them as a thank you for their service to us. It’s all very simple, not flashy, but very powerful in their eyes.”

For information on the Michigan Freedom Center: www.mifreedomcenter.org.

Sirens to signal Santa’s arrival in Manistee, 80 years ago