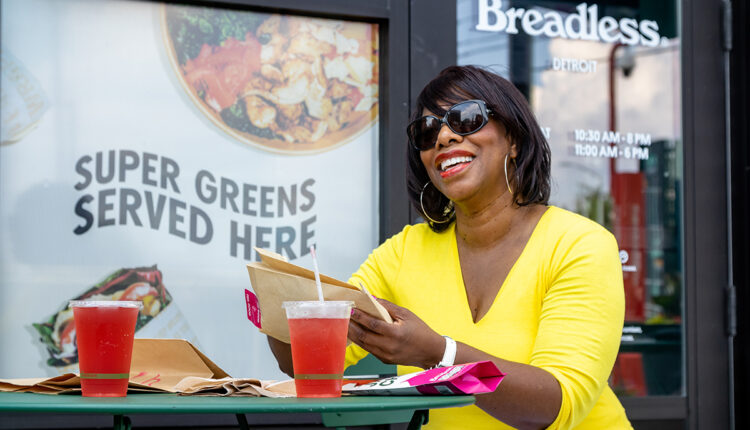 Cheryl Parks Ajamu isn’t your typical food critic. Rather, the self-proclaimed Black Girl Food Critic is a savvy entrepreneur and marketing expert, putting her branding skills to use for the benefit of Black restaurateurs.

Her mission is to inspire hungry diners to patronize Black-owned eateries that serve good food with a hearty side of hospitality. The execution is straightforward; she peruses the internet for information about Black foodmakers and gets ideas about who to visit via recommendations from friends or word-of-mouth. And when she’s hungry — or on an especially busy day, when the time pops up on her calendar — she heads out to eat.

She has a #BlackGirlFoodCritic branded t-shirt, but doesn’t always wear it to ensure that much of the time she’s getting the same experience that any other customer can expect. It’s not until she pulls out her iPhone camera and starts requesting photos with the waitstaff that people suspect something is different. Notes from her visits are then posted to the Black Girl Food Critic Instagram feed.

Most of the day, Parks Ajamu is CEO of The Ajamu Group, a marketing firm she founded in 2004, specializing in ad sales and corporate projects and events. The idea for Black Girl Food Critic came to her about a year ago during a conference call with other entrepreneurs, restaurant owners in particular, adamant about the need for people to start dining in their restaurants again after shutdowns prompted by the COVID-19 pandemic obliterated their revenue.

“I’m posting anyway about the places I’m going to eat [on my personal social media], and just came up with the concept of focusing on Black-owned restaurants because many times they don’t have the budget to advertise,” she said. “But there are so many places that have great food.”

Last week, Parks Ajamu stopped by Breadless, which, as the name implies, serves up sandwich options sans bread. Open Tuesday through Sunday, the restaurant, which launched in March, is located along the new Joseph Campau Greenway Connector, at 2760 E. Larned. Most menu items are made with halal meats and fresh vegetables sourced from local farms and the Eastern Market. Besides the food options, Detroiters will be thrilled to know there’s a free parking lot available adjacent to the building — making scooting in to get a filling, yet fresh meal on a short lunch break a viable option.

“It means the world to us,” said Breadless CEO and co-founder Marc Howland of Parks Ajamu’s visit. “Myself, my wife LaTresha Howland, and Ryan Salter — we’re the three founders — and having Breadless right here means a lot to us because this is our community. [LaTresha] grew up right down the street, and I grew up in a similar community in Cleveland. So bringing sandwiches with leafy super greens with flavor is core to us, and we’re incredibly grateful for all the love that we get.”

Foodies looking for insight into the cooking techniques that local chefs apply in their kitchens, or notes on the texture or depths of flavor in a dish, won’t find it on Parks Ajamu’s Instagram blog. But they can be confident that any restaurant highlighted is one she truly enjoyed.

“If they’re not, I don’t post them,” she said. With a mission to help restaurants grow, she just won’t share a negative review because, “I don’t want to affect their bottom line.”

In that way, the Detroiter from Memphis, Tenn., (she adopted The D as her home 26 years ago), has forged Black Girl Food Critic as a curated directory of Black-owned restaurants that nearly guarantee a good time.

To date, she’s covered 84 spots, from dine-in restaurants to mail order eats, including the aforementioned Breadless, Baobab Fare – a James Beard finalist – as well as HattieGirl Ice Cream, one of the few Black-owned ice cream manufacturers in the nation, BBQ Central, Fat Daddy’s Hot Chicken, and even Booker’s Soul Food Starters, a line of seasonings sold mainly online. She concentrates mostly on food businesses in Detroit and across southeast Michigan, but about 10 are in Tennessee. Her hometown brands wouldn’t stand for anything less, she said. She’s interested in food that tastes good above anything else, but pays close attention to the courtesy, attentiveness, and knowledge of food presented by the staff.

“These are the places that I go back to more than once; I want to send [people] to places with good food that have staff who are knowledgeable and friendly,” she said.

Black Girl Food Critic is so confident in the experience that future guests can have at the restaurants she’s reviewed that Parks Ajamu has created a way for people to treat their friends to a meal at the places that don’t offer gift cards of their own. When the vast majority of restaurants she visited didn’t offer gift cards for her to send to others, she called American Express and created one.

Black Girl Food Critic gift cards will debut at The Ajamu Group’s Multicultural Media Luncheon & Awards on Sept. 22, but any interested party can order them now online; just fill out the ‘contact us’ form at BlackGirlFoodCritic.com and request one. They work just like any other American Express gift card that can be purchased in a store and can be loaded with any dollar amount. There’s also a small processing fee, Parks Ajamu said, but shipping takes just a few days.

Parks Ajamu said it’s another way for her to build her own brand while supporting small business owners who do good work. And to do it in Detroit, she said, is part of the appeal, too.

“Detroit just has that different vibe. When I go to different places, and say ‘I’m from Detroit, people make way,’” said Parks Ajamu. “It’s the community, it’s the people — Detroit just has a different flavor. And after seeing how much it’s changed since I came here in ’96, I think it’s a great place to build a business.”

authored by
First published at https%3A%2F%2Fwww.bridgedetroit.com%2Fa-food-critic-for-detroits-black-dining-scene%2F