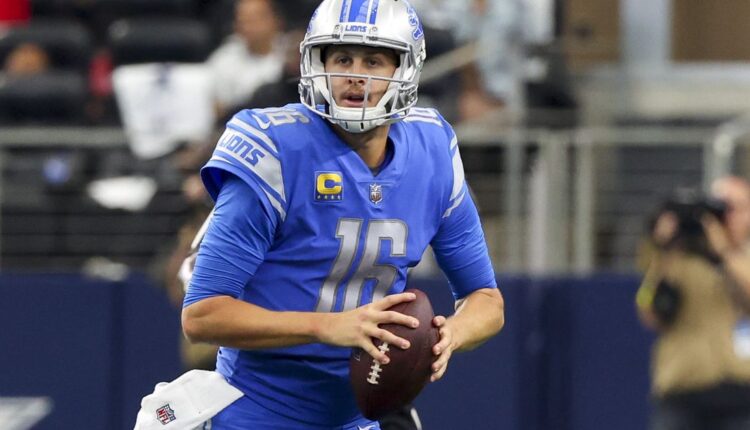 8 thoughts about the Detroit Lions in Week 8

The Detroit Lions are 1-5, and while many are prepping their mock drafts, I will do no such thing. There are 11 of these games left and plenty to play for and plenty to watch. The playoffs aren’t going to be in the cards, and there are certainly more losses to come. But if we are truly committing to a rebuild here in Detroit, the next three months of football are critically important to development and evaluation.

So as we enter Week 8, here are eight thoughts I have on the Detroit Lions.

1. The Lions young defense is starting to emerge and that’s a big reason for optimism

On Sunday against the Cowboys, the Lions started four rookies on defense (Aidan Hutchinson, Josh Paschal, Malcolm Rodriguez, and Kerby Joseph), one second-year player (Alim McNeill), and two third-year players (Julian Okwara, Jeff Okudah ). Those seven players also just happened to be some of the highest-graded Lions defensive players against the Patriots, per PFF:

A few weeks ago, the Lions defense was flailing with almost no sign that they even had a foundation to build upon. Now there’s at least a handful of under-25 players who you could see starting for this team for years to come.

And best of all, these players are getting valuable experience right now. Detroit is currently ranked sixth in defensive rookie snaps, and that’s with having played one fewer game than most teams:

Teams with the most snaps from rookie defenders through Week 7 (pre MNF):

2. … but Detroit needs to string together some acceptable defensive performances

While Sunday’s defensive performance was certainly a promising development, there are two things that give me a pause as to whether this is sustainable or not. For one, the Cowboys offense just isn’t all that good. They’re averaging just 19.1 points per game and rank 18th in DVOA.

Additionally, the Lions pulled out a bunch of new schematic changes against the Cowboys after the bye week. How will they respond without the element of surprise against the Miami Dolphins?

Miami (sixth in offensive DVOA) will be a tough challenge, but even if Detroit takes a step back, they’ll have an opportunity to rebound against struggling Bears (who somehow put up 33 last night) and Packers offenses in the following weeks.

3. The new concussion protocol probably frustrated the hell out of Amon-Ra St. Brown—and some Lions fans—but it’s the right move by the NFL

On Monday, coach Dan Campbell essentially revealed that Amon-Ra St. Brown was never officially diagnosed with a concussion. The Lions receiver passed all the concussion tests on the field, but he was not permitted to return to the game because video replay appeared to show signs of ataxia—or physical instability.

New protocols adopted after the Tua Tagovailoa mess basically say that if a neurologist deems they saw signs of ataxia on video replay, the player cannot return to the game, no matter the results of any other concussion tests.

I can’t even imagine how frustrated that must have made St. Brown at the moment. Knowing how much of a competitor he is, he was probably throwing a fit inside that blue tent. And fans are likely still frustrated, too, because three weeks ago, St. Brown would’ve re-entered that game.

But I think the rule is a good addition for two very simple reasons: 1) with brain injuries, being overly cautious is much better than the alternative. 2) Concussions can have delayed symptoms, so just because a player can pass a test in the immediacy of an injury doesn’t mean they haven’t suffered an actual concussion.

The NFL is, at the very least, trying to appear like they care about player safety, so don’t expect any changes to this new rule.

4. The Lions offense hasn’t been a total disaster in the past two games and I’m not worried about it.

Six points in two games? Yeah, that’s pretty pathetic and a huge disappointment considering where this offense was in the first four games of the season.

But I’m not all that worried about the offensive performance over the past two weeks.

Against the Patriots, the Lions had plenty of opportunity to put up points after having seven different drives enter opponent’s territory. They moved the ball consistently but shot themselves in the foot with penalties and turnovers. It was the same exact story against the Cowboys.

That’s just two three-and-outs, five total punts, and 11 drives into opponent’s territory in two weeks. The Lions are generally moving the ball pretty well, and eventually, the turnovers will settle down and the points will come. Getting arguably their two best weapons back— D’Andre Swift and St. Brown—should help some, too.

5. What the hell happened to Jared Goff’s pocket presence?

But one of the biggest problems right now is Goff’s pocket presence. This was a point of emphasis for Goff this offseason, and it looked much improved in the first month of the season. But against two teams capable of generating pressure—the Patriots and Cowboys—Goff appears to have relapsed hard.

Not only has Goff fallen back on his failed attempts to escape the pocket, but he’s also continuing to drift too far back into the pocket, making the jobs of his offensive tackles much tougher and missing open pockets to step into:

Great play call, great protection. QB can’t sit at 10 yards like a statue. Step up into the perfect pocket and deliver the ball for a TD. Should be an easy play. pic.twitter.com/9ZeTQe34yl

When your quarterback can’t navigate a pocket, you’ll never be able to hit on longer-developing plays to hit on deep shots. That’s exactly what has happened this year, as Goff has yet to complete a pass longer than 26 airyards beyond the line of scrimmage.

5. Losing Matt Nelson has been more impactful than you’d think

Through the first four weeks of the season, swing tackle Matt Nelson logged a total of 40 snaps as the sixth offensive lineman in certain formations. Nelson has been dealing with an injury over the past two games, and the offense has felt his absence.

Against the Patriots, the Lions simply did not use a sixth offensive lineman much, giving Dan Skipper just one snap, and the Lions struggled in short-yardage situations and rushed for just 3.7 yards per carry, their lowest output of the season.

The next week, the Lions entrusted Skipper to that role, but it was a disaster in those eight snaps. Skipper gave up a bad pressure on one of his two pass blocking snaps, and he was a key failure on Jamaal Williams’ fumble. Take a look:

This is insane. Demarcus Lawrence split the double, disrupted the puller on G-Lead, stoned the tight end (playing fullback), and then finally forced the fumble on the goal line. All in one play.

When it comes to DL highlights, this is like hitting for the cycle in one at bat. pic.twitter.com/HnqcBvy7MM

7. Tyrell Crosby is welcome to his opinion but he should know he looks petty now

If you don’t know, offensive lineman Tyrell Crosby had a pretty contentious end to his Lions career. Crosby alleges that the Lions misdiagnosed and dismissed his back injury and the current regime mistreated him for the entire offseason that they shared together.

“I wouldn’t want to play for that organization just knowing what I know now and just how poorly they treat their players.”

After the Lions’ loss to the Cowboys on Sunday, Crosby lashed out again.

You mean to tell me a coach who’s entire personality is letting you know their caffeine intake and using a million words to say nothing coherent ain’t it… especially when you have one of the best OLs at your disposal.

At this point, Crosby just looks petty. You don’t like Dan Campbell? That’s fine. You think he’s a bad coach? Sure, you’ve got plenty of evidence. But to say Campbell’s entire personality is his caffeine intake is to completely misread who he is as a person in a way that crappy national hot-take artists do when they call him “kneecap guy.”

If Crosby wants to share some actual criticism of what Campbell is doing, I’d be welcome to hear it. He’s got a unique enough perspective to give an informed opinion. But this is just surface-level insults from someone who is still (understandably) sour. It’s disappointing because I’ve always enjoyed Crosby’s point of view.

8. Don’t draft running backs in the first two rounds of the draft

Hospitals Said They Lost Money on Medicare Patients. Some Made Millions, a State Report Finds.