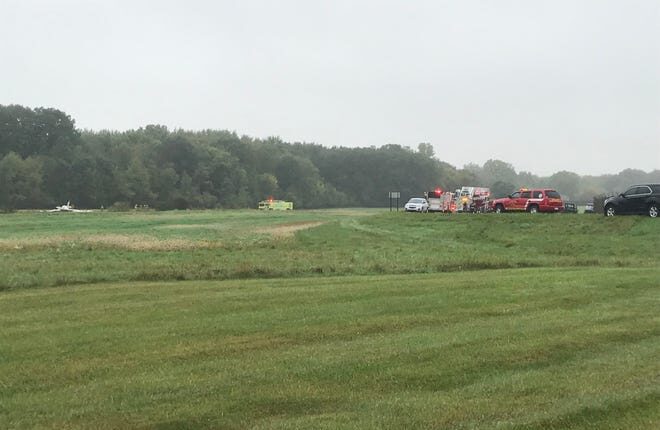 Federal investigators blamed pilot error and an overloaded aircraft for an October 2019 plane crash near Capital Region International Airport that killed five people, according to a final report from the National Transportation Safety Board issued Wednesday.

The Socata TBM 700 was carrying six people when it stalled shortly before reaching the airport’s boundary on Oct. 3, 2019, according to the report.

The plane slowed to just 74 knots at the time of the crash, under the manufacturer’s specified approach speed of 85 knots. In addition, the plane’s weight was 7,626.28 pounds at takeoff — 126 pounds over the maximum allowable landing weight, the NTSB said.

Four of the men were headed to work as contractors for the Lansing Board of Water & Light’s Delta Energy Park, a natural gas-fire power plant that began operating in March.

Investigators also said the plane was more than 200 pounds overweight at the time of the crash. In addition, the aircraft’s load was too far back, which contributed to the plane being difficult to control.

The investigators determined that the plane’s center of gravity was 2.95 inches further back than the maximum distance, which would have made it tail-heavy.

“The airplane was operating above the maximum landing weight, and past the aft center-of-gravity limit at the time of the accident, which can render the airplane unstable and difficult recover from an aerodynamic stall,” the report said.

“The study highlighted a tendency for the Socata TBM 700 airplane to start rolling to the left, controllably, during go-around while at airspeeds equal to or greater than 70 knots, and from a fully reduced engine torque or adjusted to 20%,” the report said. “However, the left rolling tendency becomes increasingly pronounced as the airspeed decreases below 70 knots.”

“The study suggested that additional pilot training at slow airspeeds could be beneficial in preventing similar accidents in the future.”