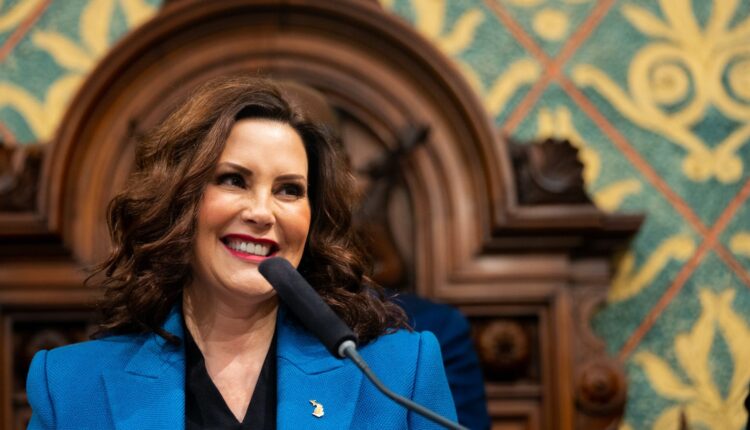 The address to the joint session was the first to be conducted in-person in the House chamber since 2019, and marks Whitmer’s first major appearance after being inaugurated for her second term.

Ahead of the speech, Whitmer promised to lay out plans to help Michiganders deal with inflation, the rising cost of living and access to education. She used the address to announce two new major pieces of policy- the “Lowering MI Costs” plan and “Make it in Micbig.”

The Lowering MI Costs plan encompasses much of Whitmer’s economic priorities for the state, including eliminating the pension tax, expanding tax credits for low-income and working families.

Whitmer also asked to make the Great Start Readiness Program universal, so as to allow all four-year-olds in the state to attend preschool. Should the program expand, Whitmer said it would save families, on average, $10,000 a year in child care costs.

“I am proud that we created powerful economic development tools and I know we will work together to make them the strongest in our state’s history,” Whitmer said. “For too long, we were fighting with a hand tied behind our back. Now we’ve got the upper hand.”

Whitmer devoted large sections of her speech to education topics ranging from paying student teachers to curbing gun violence in schools. She said she hopes to expand upon education advances from her first term with programs to provide students with personalized 1-on-1 support to recover from loss of instructional time due to COVID-19.

“When a child gets a great start, learns to read, and graduates high school, they are on track to land a good-paying job or pursue higher education,” Whitmer said. “Unfortunately, the last few years have disrupted regular learning patterns. In-class instruction alone is not enough—our children need more support to master the skills we know they need most.”

Getting rid of the state’s 1931 ban on abortions and expansions of the Elliott-Larsen Civil Rights Act were cited by Whitmer as examples of forthcoming legislative efforts to make Michigan a more inclusive state.

“We should build on our reputation as a welcoming beacon of opportunity where anyone can succeed,” Whitmer said.

Republican response to the speech was mixed – House Minority Leader Matt Hall, R-Richland Twp., said in a statement that the address was “nothing more than a stump speech, light on details and void of ideas to deliver on the priorities of the people of Michigann.”

Other GOP legislators said they felt more optimistic about the governor’s plans for the new term. Rep. John Roth, R-Traverse City, said there were several topics in the speech that he saw as opportunities for bipartisan cooperation.

“I was happy to hear the governor was on our economic plans that we did last year, and want to continue on with those,” Roth said. “I’m glad to hear that.”

House Speaker Joe Tate, D-Detroit, said that his caucus is excited to get to work making the policy plans Whitmer discussed a reality.

“We’ve been talking about the agenda that you’ve been seeing for over the past decade,” Tate said. “How are we supporting working families? How are we looking at safe and strong communities? How are we building a world class education system for our students in Michigan?”

With a slim Democratic majority, Tate said the first priority of the legislature in the coming weeks will be tax relief bills. Whitmer discussed bolstering Earned Income Tax Credit, which she referred to as the “Working Families Tax Credit.” She said this expansion would provide federal and state tax refunds to approximately 700,000 families.

“As we work together to build a brighter future, we need to lower costs and support every kind of family: those who have kids and those who do not,” Whitmer said. “The Working Families Tax Credit benefits all kinds of families, and it directly impacts nearly 1 million children—almost helped the kids in Michigan. It will put hundreds of millions back in family budgets to help with rent, school supplies, and food on the tables.”

While Whitmer’s addressed centered economic and workplace issues, one notably absent topic was Democrats’ plans to repeal right-to-work laws to the benefit of labor unions. Lt. gov. Garlin Gilchrist said that even though it wasn’t present in the speech, the issue of union support is at the top of Democrats’ list of priorities.

“We’ve been very clear about how important it is to us to make sure that workers are respected and protected at work,” Gilchrist said. “And you’re going to see a whole host of proposals that will be introduced along those lines so that working people in Michigan know that there’s a false choice between busineat and work.”

With the State of the State address completed, Democrats will release their proposed budget for the upcoming year within the coming weeks, which will include appropriations for most of the plans proposed during Whitmer’s address. State Sen. Mallory McMorrow said that Michigan Democrats are excited to actualize a full agenda for the first time in decades.

“I think that especially over the past few years, nationally, and in the state, we’ve all gone through so much, that now is time to readjust and believe in ourselves and come together and tackle big things,” McMorrow said. “So I’m excited about what we’re gonna be able to do to do.”