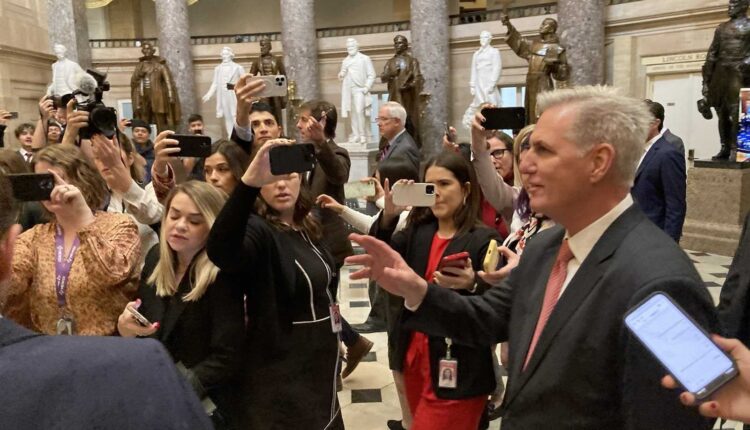 WASHINGTON — The U.S. House adopted rules for the 118th Congress on Monday, though several of the concessions Speaker Kevin McCarthy made with more conservative members of the Republican Party to secure the gavel weren’t included in the document, or publicly circulated ahead of the vote.

The 55-page rules package the House voted nearly party-line 220-213 to adopt sets the parameters for how bills should be written, how committees will operate and how the floor will run during the next two years. The majority in every Congress writes its own such rules.

But it doesn’t include promises McCarthy reportedly made to cut spending by more than $100 billion, place hard-right lawmakers on key committees and to put together some sort of debt limit plan ahead of a default deadline later this year.

Republican Rep. Tony Gonzales of Texas was the sole member of his party to vote against adopting the rules.

Gonzales didn’t speak during floor debate Monday, but said on “Fox & Friends” on Sunday that he opposed the rules package because of an agreement to cut spending to the last fiscal year’s levels and a provision that allows any one member to call for a no-confidence vote on the speaker.

“I’m against the rules for a couple of different reasons. One is the defense spending, the cut in defense. I think that’s an absolutely terrible idea,” Gonzales said.

“But the other is the vacate the chair. I don’t want to see us every two months be in lockdown. This isn’t the parliament. The American public are counting on House Republicans to be the one savior in this all. If we can’t get this right, it’s going to be nightmare after nightmare.”

Massachusetts Rep. Jim McGovern, the top Democrat on the Rules Committee, urged opposition to the package during floor debate Monday afternoon, arguing that it would empower the extreme right of the House Republican Conference.

“What’s clear from all of this is that the Republican Party no longer cares about governing and this rules package is exhibit No.1,” McGovern said. “This rules package puts politics first, empowering the extremists who are only interested in their own power.”

Maryland Democrat Steny Hoyer spoke against the changes, saying they would “impede” the work of the House.

House Majority Leader Steve Scalise, a Louisiana Republican, lamented that legislation brought to the floor during previous sessions of Congress was written “behind closed doors, by a small number of people not concerned about the consequences.”

“For a long time, we’ve been saying this needs to change. In fact, we ran on an agenda to change the way Washington works, to fix this broken system, to get our country back on track, and we were awarded the majority by the people across this country,” Scalise said. “So, today starts that process of fixing what’s broken in Washington.”

Scalise didn’t express frustration with the undisclosed agreements McCarthy made with conservative Republicans behind closed doors last week, which are unlikely to become public in written form.

Texas Rep. Chip Roy, one of the holdout GOP lawmakers who negotiated concessions from McCarthy last week in exchange for votes to become speaker, said on the floor that Republicans and McCarthy agreed to a floor vote on a Texas border security plan, a vote on legislation to set term limits for members and a process that would bring appropriations bills to the floor under open rules, which allow any member to offer amendments.

“Yes, we have had conversations and agreements, as individuals are supposed to do,” Roy said. “Looking each other in the eye and saying, ‘We’re going to bring balanced budgets to the floor of the House.’ You bet that we’ve got agreements, we’re going to do that.”

Among the rule changes are new budgetary constraints and reporting, a requirement bills adhere to a single subject and allowing any member to introduce a resolution that could lead to a no confidence vote on the speaker.

Other proposed changes include the renaming of committees — for example, the Education and Labor Committee will be redubbed Education and the Workforce. The package calls for the empaneling of a select subcommittee to investigate the origins of the coronavirus pandemic.

Republicans are moving from the pay-as-you-go rule that Democrats used to offset the cost of new mandatory spending to a cut-as-you-go rule.

The change “prohibits consideration of a bill, joint resolution, conference report, or amendment that has the net effect of increasing mandatory spending within a five-year or ten-year budget window,” according to a GOP summary of the rules changes.

Republicans are reinstating a rule that legislation must be released at least 72 hours before floor votes can take place, an effort to address Republican criticism that there’s often not enough time to read and understand legislation before members are expected to vote.

Rep. Michelle Fischbach, a Minnesota Republican, said during floor debate the provision would “allow more thoughtful and deliberate consideration that will improve what we pass out of this House.”

New reporting requirements for major legislation mandate that the Congressional Budget Office, the nonpartisan scorekeeper, include a long-term economic outlook when giving a budget score to the bill, including effects on economic output, employment and capital stocks.

Not included in the official rules package, or public documents, are reported handshake deals that McCarthy made with certain members of his party in order to secure the votes needed to become speaker last week, following four days of voting and 15 ballots.

White House spokesperson Andrew Bates said in a written statement Monday the impact of reducing defense spending, which some Republicans swear they won’t agree to, would make the United States “less capable of keeping the American people safe and advancing our national security interests.”

“This push to defund our military in the name of politics is senseless and out of line with our national security needs,” Bates said.

Democrats voiced concerns about proposed reductions in government spending, including possible defense cuts and threats to programs like Social Security and Medicare.

“This is an extreme proposal that’s in front of us,” Massachusetts Democratic Rep. Richard Neal said during floor debate.

“If they follow the logic to its manifestation, this will pit Social Security, Medicare and Medicaid against defense spending,” Neal added. “Our seniors will be sold out, our military will be sold out, and the full faith and credit of the United States will be under threat. All in a quest to organize the House.”

Both parties accused the other side of so-called “weaponization” of government agencies and congressional investigations.

The GOP plans to pass a bill late Monday to pull funding for additional staffing and enforcement at the Internal Revenue Service, accusing Democrats of targeting everyday Americans with tax audits. The bill is likely to hit a road block in the Democrat-majority Senate.

The GOP legislation would increase the deficit by $114 billion over 10 years, according to an analysis released Monday by the CBO.

In addition to the panel to investigate COVID-19 origins and policies, the GOP also included in its rules the establishment of a panel that will be “committed to investigating the radical left position of the federal government,” said Tom Cole, of Oklahoma, who now chairs the Rules Committee.

The Republican majority is expected in the coming days to bring two abortion-related bills to the House floor — legislation that was outlined in the rules package.

“After a week of chaos, we now have a rules package for MAGA extremists attacking our freedoms and every major responsibility of this body,” said Washington Rep. Pramila Jayapal, chair of the Congressional Progressive Caucus. “This package criminalizes abortion by advancing bills that attack access and health care without a single hearing or markup.”

The House will reconvene Tuesday, Wednesday and Thursday of this week.

Electric bikes are creating a new economy in Detroit