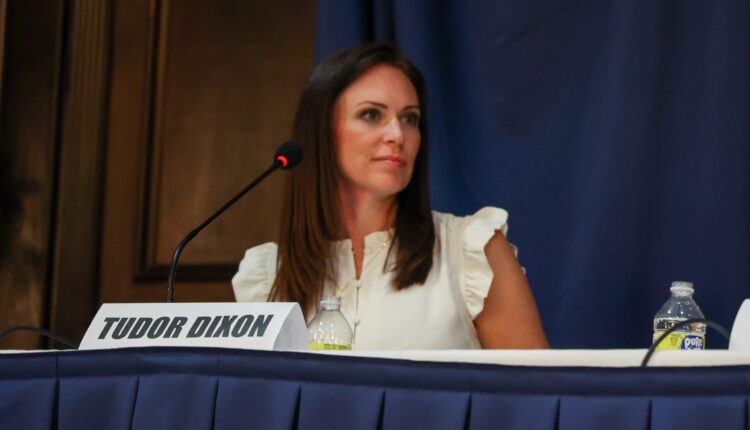 In Michigan, the GOP nominee for a critical congressional seat is on record blasting women being in the workplace and having the right to vote.

John Gibbs, who won his 3rd District primary thanks to an endorsement from former President Donald Trump and is facing Democrat Hillary Scholten on Nov. 8, got exactly zero backlash from his party when his retrograde views as the leader of an anti-feminist “think tank” made the news last month.

That’s pretty amazing since the Michigan GOP, for the first time, has nominated a woman for governor, Tudor Dixon. You’d think it would be untenable for the party to support Gibbs, who apparently doesn’t think their top-of-the-ticket nominee should be able to vote for herself this fall.

But Dixon’s girlboss gubernatorial campaign has been its own dizzying mess of contradictions. Although she’s facing Democrat Gretchen Whitmer, Michigan’s second female governor in history, Dixon bizarrely declared after winning the GOP primary: “It’s time to elect a real woman to lead Michigan.”

While the Republican stresses that she’s a mom, she doesn’t seem to believe Whitmer is, sneering that she’s merely a “far-left birthing parent.”

Some pundits have been content to let that weird misogyny slide, as well as the fact that Dixon doesn’t believe in basic human rights for women and wants to ban abortion, determined to portray the race as a feminist triumph just because two women happen to be running.

Voters haven’t been fooled, however, as Whitmer is winning women by a 2 to 1 margin in polling. It would be hard to imagine a male Republican nominee performing worse.

Maybe that’s why Dixon decided to turn her fire Friday on women who have the audacity to *checks notes* be single. Yes, in the year 2022.

Dixon’s meandering diatribe — her signature style, despite having hosted a far-right talk show with guests pushing everything from QAnon to the Proud Boys — started with an interesting assessment of families.

“Families look all different ways. They’re the ones telling me that on a regular basis, but apparently, they’re refusing to see one dynamic here. A lot of people want to have families. This state, we don’t have support from the governor for families unless they look exactly the way she wants,” Dixon said at the St. Clair Shores event.

Then she veered off in a pretty unexpected direction.

It’s wild in the 21st century that Dixon feels she has the right to judge women based on their marital status. Who — and I cannot stress this enough — cares?

Most people expect candidates running for high office to talk about what they’re going to do about the economy or health care costs, not to sound like their great-aunt haranguing them at the family reunion for not getting their MRS Degree.

It’s wild in the 21st century that Dixon feels she has the right to judge women based on their marital status. Who — and I cannot stress this enough — cares?

If you want to get married, that’s your choice. If you don’t, that’s also your choice. It literally isn’t the business of anyone running to run this state.

Interestingly, even though Dixon has taken it upon herself to lecture women that bagging a husband and having kids is the ultimate prize in life, her family has been absent from almost all of her campaign events.

It’s also unclear if she was going to vilify single mothers and thought better of it — perhaps because GOP Secretary of State nominee Kristina Karamo is one — or if Dixon just flubbed another line.

But we do know that Dixon has shown little use for any women who dare disagree with her, like those who don’t want books banned in their kids’ schools or back abortion rights, which she condescendingly claims isn’t an important issue. In fact, when she later tried to mop up her single women slight, her excuse was that she was really blasting Whitmer for vetoing funding for anti-abortion centers, which, of course, makes no sense. And let’s not forget Dixon scoffing about the fact that “families look all different ways” these days, while somehow trying to paint Whitmer as intolerant of traditional families (despite having a husband and two kids).

We’ve all gotten the message loud and clear. If you’re single, pro-choice, LGBTQ+ or all of the above, there’s no place for you in a Dixon-fied Michigan. Get that ring, give birth, deny who you love — or get out.

She’s not running to represent the 10 million residents of Michigan, only those who agree with her and conform to her far-right rigidity.

What a strange election year it’s been in Michigan. From Gibbs slamming women’s suffrage to Dixon droning on about spinsters, turning back the clock on women’s rights is all the Republican rage. It’s not too late for someone to start campaigning on taking away women’s property rights.

Come to think of it, that would be a big incentive for women to get married. Maybe that’ll be Tudor Dixon’s pitch this week. You never know.

Listen: Why Childbirth Is So Dangerous for Many Young Teens