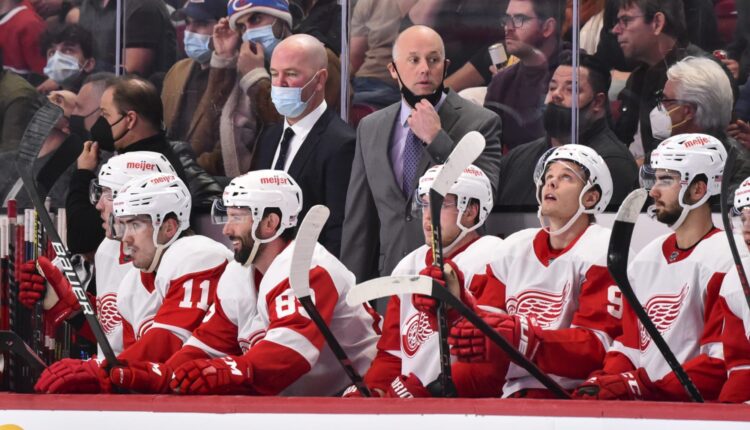 the offensive woes are reappearing

One of the biggest storylines of the season for the Detroit Red Wings was improved offensive performance. While the team relied on fantastic goalkeepers, skilled defense and low-risk offensive last year, the script seems to have turned around this year. The defense was permeable and the offense surprisingly effective, especially at the top of the line-up (although, like last year, great goalkeepers were still the key to Detroit’s early success).

In recent weeks, however, the Red Wings have started to regress aggressively, which is particularly evident in Detroit’s two defeats since the game resumed (a 3-1 loss to Washington and a 5-1 loss to Boston).

Part of the problem? The team’s offense is mainly based on top-line production. Dylan Larkin, Tyler Bertuzzi and Lucas Raymond have been the key to offensive play this season. If the top scorers fail to find the back of the net, doom for the rest of the offensive.

Another problem is the recent battles for male advantage. For the first few weeks of the season it seemed like the power play had improved a lot from last season’s terrible unit. Moritz Seider quickly proved to be a capable power play quarterback for the first unit, and Nick Leddy was a solid option to lead the second unit. Especially with the topline on the ice, the new power play looked neat.

Since then, Detroit has regressed enormously. Now the Red Wings’ success rate in man advantage is only 14.4 percent, the second worst in the league (just better than the humble Montreal Canadiens). It’s hard to put the blame on just one or a few players – the unit just doesn’t look like it did before. They seem to struggle to keep the pressure up and always seem to misfire when they finally pull the trigger.

It also needs to analyze the results of the last two Wings games while taking into account the most recent events. COVID-19 raged through the locker room, taking a good chunk of the players out of the way. The team was forced to stop in the middle of the season and wait for it to spread. Even if the COVID did not affect the physical health of the players, abruptly stopping and isolating (not to mention a few shorthanded games) could very well have been mentally stressful for the players.

Basically, fans should wait a little longer for the alarm bells to ring. The recent attacking performance was worrying but the team has shown that they can score some goals. Give the powerplay some time to find its groove again and let the players recover from the break.

However, if Detroit’s last two appearances are being repeated frequently in the coming weeks, questions about the offense should certainly be raised.