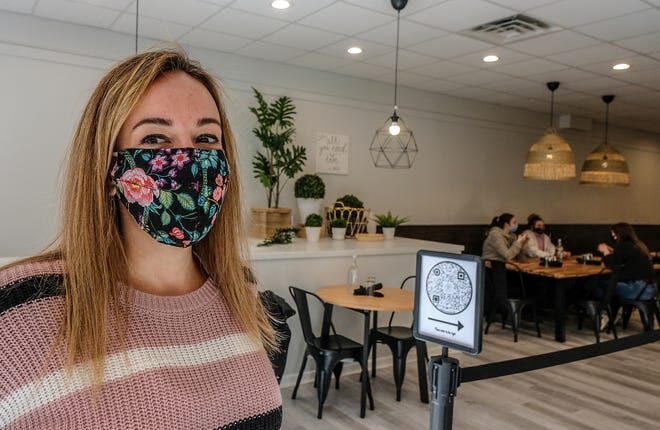 The couple planned to open a second location for For Crêpe Sake there.

The original For Crepe Sake location in Lansing’s South Washington Square, which the Mudreys bought in 2018, was closed indefinitely on April 3.

In the middle of a city center with no government employees or other regular customers, it was not reopened.

But the Mudreys decided not to give up their plans to open For Crepe Sake in East Lansing, where the couple live and raise four children.

It took six months longer than they had hoped to get it ready, but the restaurant on 211 MAC Ave., which used to be the Mackerel Sky Gallery of Contemporary Craft, will have its grand opening at 8 a.m. on Saturday.

It is an opportunity for the Mudreys to be small business owners in their own community. Gina Mudrey grew up in East Lansing. The couple met as students at Michigan State University.

“It’s so exciting for us not only to be in her hometown, but also to be one block from the Michigan state campus,” said Mike Mudrey.

There’s a trick to twisting crepe batter into a wide, thin circle on a hot skillet, said Mike Mudrey.

He admits that Gina is better at it than him.

“It takes the right amount of speed and pressure,” he said.

This is where For Crêpe Sake’s crepe creations begin. The delicate crepe is then made into a sweet or savory dish that is filled with ingredients such as lemon curd or Nutella, fresh fruit or ham and cheese.

Many of the menu items are familiar to fans of what used to be downtown Lansing, but there is also a new selection, including Belgian waffles with a variety of additions such as bananas and caramel sauce.

The waffle creations are right off the menu at Brown Butter Crêperie + Cafe, a Grand Rapids restaurant that the Mudreys bought after it closed last year.

They reopened it in July with limited capacity and learned a lot over the months that followed.

He sees similarities between the Grand Rapids area he grew up in and East Lansing.

Brown Butter Creperie + Cafe is popular with younger customers who frequently share photos of their plates from the restaurant on social media, Mudrey said. He hopes For Crêpe Sake will be warmly received by MSU students and neighbors in Okemos and Haslett.

“People came by while we were working on the room,” Mudrey said. “It just seems like there was a lot of excitement.”

Before the 1,300-square-foot space on the first floor was home to Mackerel Sky, which closed in 2019, it was occupied by restaurants, Mudrey said.

This made it easier to return to food production.

“While the physical space and aesthetics weren’t for a restaurant, it had the bones of a restaurant,” he said.

When fully occupied, the restaurant offers space for 45 people.

“The atmosphere is inspired by brown butter,” he said. “It’s a different mood. We tried to keep it feeling really airy.”

The Mudreys have hired 15 people and are likely to hire more people.

For Crêpe Sake is open Tuesday through Sunday. Information on opening times and menu details can be found at www.crepesake.com or on Facebook at https://www.facebook.com/ForCrepeSakeEastLansing.