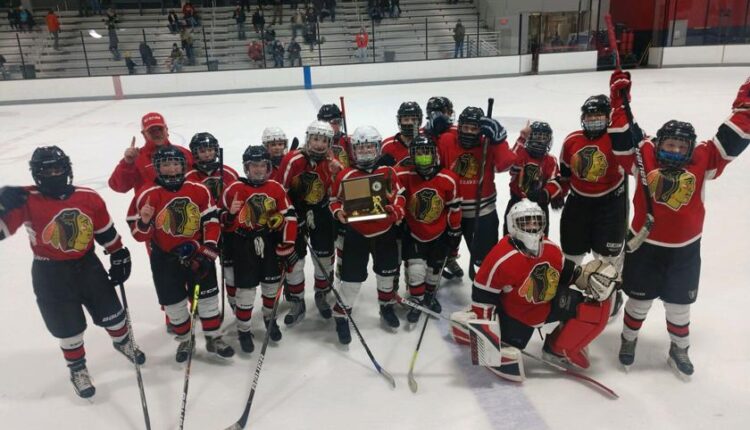 The Blackhawks returned to Tawas as District 7 Pee Wee Division Champions. The Blackhawks are now competing in the State Finals Tournament April 23-25 ​​at the Crystal Fieldhouse Ice Arena in Burton.

According to the team’s coaching staff, the Blackhawks played a very tough competition starting with a physical Soo Elks team. The Blackhawks dominated the Elks in a 6-0 win.

The Blackhawks faced an old opponent, Cadillac TC Mobile, in their second game. Tawas won 7-1 and had enough points to secure first place in the quarter-finals.

In the first game of the quarterfinals, Tawas had to face the Soo Elk team again. Tawas won the rematch 7-0.

In the semifinals game Tawas competed against the other top team of the tournament Traverse City Red. The game turned out to be a nail bite.

After three periods of play, the game was tied 2-2 and went into overtime. The tie was eventually broken in the second overtime. Traverse City’s top defender received a trip penalty and gave Tawas the opportunity they were looking for. Tawas won 3-2.

Cadillac was the final obstacle between the team and their championship title. Tawas was ready for the challenge. According to the Tawas coaches, they knew Cadillac had a very strong goalkeeper and to beat them again they had to attack, defend at all costs and keep the puck out of the net.

The latter was not a problem for Tawa’s goalkeeper. The Blackhawks defeated Cadillac 5-1.

Tawa’s head coach Eric Miller said he knew how hard it was to win a district title. The Tawas Pee Wee team has now won the District 7 title for three consecutive years. Miller said he believed it all boils down to “hard work pays off”.

Tawas is a multi-city hockey center that come together to bring the best teams onto the ice. In the past and present, they have had children from the Tawases, West Branch, Hale, Oscoda, and AuGres making up the teams.

“Playing as a team makes that team who it is, not where you come from,” said the coach.